10 Daily Actions to Build Your Crowd 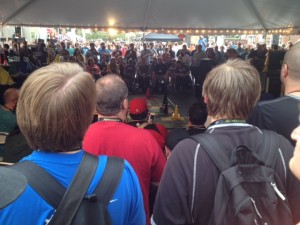 One of the key concepts that I often talk about on this blog (and that Richard Bliss often mentions on the Funding the Dream podcast) is that launching a Kickstarter project without a built-in crowd of people who are aware of you can lead to your project being dead on arrival.

So how do you get that crowd of people? I’ll tell you how below, but first I want to tell you how not to get a crowd: Don’t buy it. If you buy Facebook fans, Twitter followers, or attention of any sort, you’re simply diluting the base of people who are actually interested and invested in what you’re doing.

Building a real crowd takes time, but it doesn’t take much time every day. One of the most inspiring blog entries I’ve ever read was posted by marketing guru Seth Godin about 2 years ago. It’s called Feet on the Street, and it’s a list of daily actions you can take to grow your crowd through relationships. Most of the action points below are direct quotes from Seth’s post.

About a month ago, Richard Bliss and I took a look at that list and applied it to Kickstarter creators. You can listen to the 20-minute podcast here. Then I would recommend you print out the following list, pin it to your wall, and make sure you do at least ONE of these things ever day from now on. Your company will never be too big or too small for these action items.

Before you do any of these things, set up a Facebook page, Twitter account, and e-newsletter (I use MailChimp). People need a way to stay in touch with you after you engage them.

What types of things have you done to grow your crowd, especially if it’s not on this list and might help other creators?

Update: Check out this great list from 40 creators about what they did to build a crowd.

94 Comments on “10 Daily Actions to Build Your Crowd”