I returned to my home/office yesterday evening after spending Wednesday-Sunday in Indianapolis at the Gen Con gaming convention. Overall, it was a productive, profitable, and enriching experience.

I realized as I started writing this blog post that it was turning out almost identical to last year’s article. Really, the only significant differences this year were (a) we had 2 new products to feature and (b) we had a conference room and a full team for daytime events (similar to 2015 and 2016).

Just to give you some broad-strokes context, the way Stonemaier Games approaches Gen Con is that we share a booth with Meeplesource in the main exhibit hall. Meeplesource runs the booth with a mix of their team and our volunteers. Meanwhile, other Stonemaier volunteers run demos in the Denver conference room of the Marriott. I’m in meetings in that same room throughout the day, and at night we host open game nights in the room and on the tables just outside the room.

So this year I thought I’d have some fun by rating different aspects of the Gen Con experience. We’ll see how this goes! In no particular order:

Meeplesource was flat-out amazing. They spent 2 full days setting up their 20×20 booth. They avoided storage costs by somehow packing 18 pallets worth of products into the booth, including 1000 copies of The Rise of Fenris, 570 copies of My Little Scythe, and nearly 1000 other units of Stonemaier products (that doesn’t even include promos and Meeplesource-specific products).

You might wonder why Stonemaier just doesn’t run its own booth. It’s certainly possible that we could, though there’s nothing about it that appeals to me (the logistics, the controlled chaos of the exhibit hall, etc), so I would have to hire someone else to do it. At that point I might as well keep working with Meeplesource, as they’re excellent ambassadors of our brand.

I only had one chance to briefly visit the exhibit hall, as every waking minute of my Gen Con week was scheduled. Here’s me and Meeplesource’s Cynthia on Thursday morning before the hall opened: 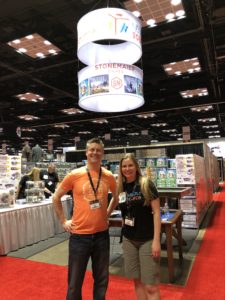 We had an incredible group of ambassadors helping out at the booth and in the conference room. They’re the heart and soul of Gen Con, and they made me feel like our convention presence is in good hands even if I’m not able to attend. I’m very fortunate to have such kind, generous, hardworking people to welcome others into the Stonemaier community. Plus, they tolerate wearing orange shirts for 4 days in a row. 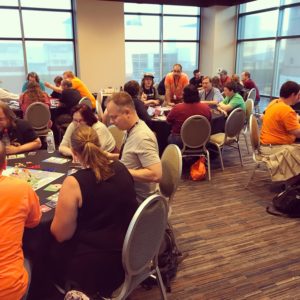 I am perfectly fine working with game designers who only do what the title suggests: design games. But it’s certainly a wonderful perk when those designers happen to be wonderful, outgoing people who want to interact with customers in the exhibit hall for 8 hour a day and 3 hours at night. That’s exactly what Hoby Chou (My Little Scythe) and Ryan Lopez (The Rise of Fenris) did. 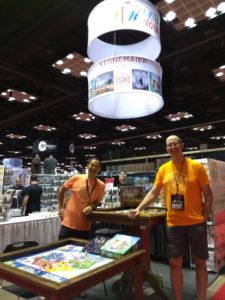 I want to make sure you know this is entry isn’t all 10/10s. Setmore is the web app we used for people who wanted to schedule meetings with me (Jamey) at Gen Con. It’s a great app, but it was one huge flaw: When someone makes an appointment, the default time zone Setmore applies to the appointment is that person’s current time zone, not the time zone in the location of the appointment (Indianapolis is EDT). I warned people about this when I sent them the Setmore link, but despite that, we still had 4 people show up either an hour early/late or worse.

I should note that I also made the mistake of not printing out the Setmore schedule (and forgetting that they have a mobile app), which meant I didn’t know who was there at the correct time when 2 different people showed up for a meeting at the same time. That’s on me.

So, of course it feels good to me when people to come out of their way to say hi at a convention or learn/play a game. I think what continues to impress me is how kind and genuine the vast majority of people are at Gen Con. I’m very grateful to be in the gaming community.

Also, as a designer, “A Night in Greengully” was one of my favorite events ever. People brought their completed Charterstone villages and played with other people who had finished the campaign (spoilers below if you zoom in). 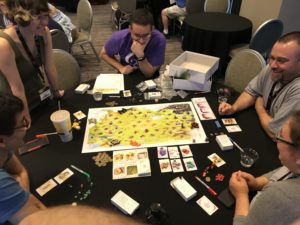 If I rated every year of game pitches at Gen Con, this would have the highest of all of those ratings. It was clear that everyone who pitched to us this year was intimately aware of our submission guidelines and requirements, which meant that we weren’t spending hours on games that we knew within seconds weren’t a good fit for us. While I think it’s unlikely we’ll publish any of the games we demoed at Gen Con this year, I’m impressed by the quality and innovation of each of them, and there are a few we’re on the fence about.

As a point of reference, Between Two Cities, the first game we published that was designed by other people, was a game we discovered at Gen Con a few years ago. Now it looks like this: 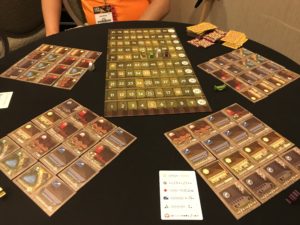 I’m lucky that Stonemaier has a number of fantastic partners ranging from localized publishers, distributors, Panda (manufacturer), digital game companies, accessory companies like Top Shelf Gamer, etc. Gen Con is a great place to get some face time with them and get their honest opinions about how we’re doing (and for me to express how they’re doing without the contextualized barrier of email).

I had a lot of great chats, including my first meeting with two long-time Spanish partners (Maldito and Gen X) and a blunt but super helpful meeting with the great folks at Universal Distribution in Canada. I think one that will stick in my memory is Arclight, our partner in Japan, given that I studied Japanese many years, including several stints abroad in Hiroshima and Kyoto. 16 years removed from college, I wasn’t comfortable to speak Japanese with Arclight, but my brain was immensely happy to understand a lot more than I thought it would (and their translator was excellent). 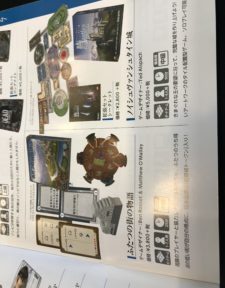 This was, admittedly and unfortunately, a mixed bag. I worked with and encountered some great people at Gen Con, including the infinitely patient and accommodating Megan and Derek.

But for every great events team employee (volunteer? I assume they’re compensated), there seemed to be someone eager to misuse or misunderstand their authority, like the person at GM HQ who literally baited my co-founder into an embarrassing moment, a person who would not let me leave a room into a public area (instead pointing me to an exit that led me to a private area I definitely wasn’t allowed in), and some old dude who–just like in 2016–did a really sneaky and unnecessary badge check late in the night in a private room we paid for. I know all of these people are just doing their jobs, but it was a struggle at times.

In addition, as organized and streamlined as the Will Call system is, why is the Will Call line an hour long for all of Wednesday and Thursday? And why are people’s names not printed on both sides of their name tag? Gen Con, if you want to know how to do that, talk to Geekway to the West.

A handful of my meetings were with media, and they were fun. The conference room is great for these chats, as it’s many decibels quieter than the exhibit hall. I got to film some footage for a Between Two Ferns style TV pilot that will be awesome if it’s picked up.

This wasn’t technically a media meeting, but it was awesome to meet Instagram personality @mackothemeeple…and she was dressed up as Anna from Scythe! 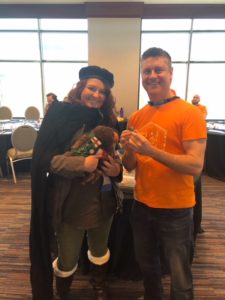 The vast majority of my time at our open game nights was spent mingling instead of playing games that it’s rather difficult for me to comment on all the new releases at Gen Con. I did get to play The Mind, which I’ll discuss on my YouTube channel tomorrow. I was also gifted The Rise of Queensdale and Western Legends, both of which look epic. A friend picked up Forbidden Sky, which I’m really curious about (I love Forbidden Desert). I’m fascinated by the manufacturing process behind KeyForge. Oh, and I came home to find Brass: Birmingham, Welcome To, and a Graphic Novel Adventure, all of which I’m looking forward to playing.

We stayed in the Westin. At Gen Con, unless you have a nice suite, hotel rooms are just for sleeping and hygiene. The Westin was fine for these functions.

We spent most of our time in the conference room we rented from the Marriott, and I would say that the minimal services we paid for (deliver food on time, remove it on time, refresh water/candy once a day, do a quick clean during off hours) were woefully subpar. I had to prompt them whenever we wanted anything. Granted, I know how difficult it can be to work in the service industry during a busy time, and the room itself is great–it’s full of natural light–but I can’t recommend the Marriott after that experience. 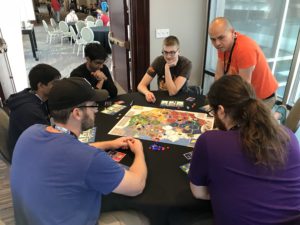 We ate a broad range of food at and en route to/from Gen Con:

Biddy and Walter stayed in St. Louis in my home/office while I was at Gen Con. A neighbor took care of them, but apparently they were not good boys. I walked in the door last night to a warzone: Huge tufts of cat hair were everywhere, my sheets were in various stages of washing/drying (Biddy pooped on the bed in retaliation twice), and Walter was meowing/crying to the tune of “Taps.”

At least Biddy was pretty cute before I left (he’s in new BoardGameTables.com bag): 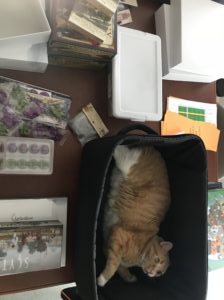 I’ve mentioned on this blog that whenever I’m out of the office for a day, I have to cram that day into another full work day when I return, which is exhausting. Even though I replied to e-mails and social media in spare moments at Gen Con, I returned to 397 emails and 114 notifications on BoardGameGeek, as well as a long to-do list from the 40+ meetings I had at the convention. I’m caught up on emails and social media, hence the decent rating for this category, and I’m hoping to return to regular responsibilities tomorrow.

Even though it feels like “everyone” is at Gen Con, 60,000 attendees is just a fraction out of the tens of millions of tabletop gamers worldwide. So this year we authorized distributors to sell up to 2 cartons of My Little Scythe two weeks before its release date if those retailers committed to featuring those games at prerelease “Gen Can’t” events.

I honestly don’t know all that much about how this went. I’m confident that some retailers followed through on their promise. I think it’s likely others just sold the game early. And I know that there are some retailers that didn’t receive the game in time (we made things a little too tight given that the games didn’t arrive at the GTG warehouse until mid-July), for which I’m very sorry.

Would we do it again? Yes, I’m open to it, though I think I’d only initiate the prerelease if the games are already in our warehouse and if there’s a full month before the prerelease date. 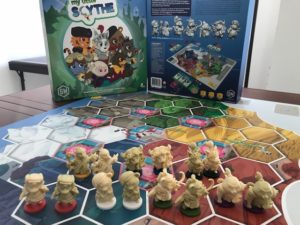 As I alluded to earlier, one of the biggest revelations this year was that our Gen Con volunteers and Meeplesource are so good that they make me largely irrelevant. There is value in me personally being at Gen Con, but I don’t think it’s necessary for me to do so every year. So we’re leaning towards not attending next year and simply helping Meeplesource provide a shared, big, well-staffed space in the exhibit hall. 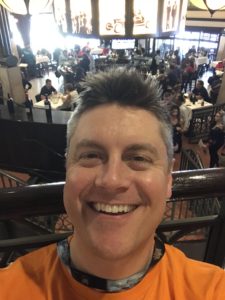 So many different topics today! I’d love to hear your thoughts, and I’m happy to answer questions. Also, if you attended Gen Con, is there anything you think publishers and creators should know?