It’s become a best practice for a board game Kickstarter campaign to include a gameplay video on the project page. This gives potential backers a way to experience the feel of the game before they pledge.

I’ve watched hundreds of gameplay videos–many of them very well made–but Who Goes There? by Certifiable Games has the best gameplay video I’ve ever seen. It was created by Mad Genius Inc.

You really need to watch the video to understand what makes it so good, as it’s a combination of many different factors:

Have you seen any other companies make gameplay highlights videos like this? (Thanks to Jason Brown for the tip about Who Goes There?) 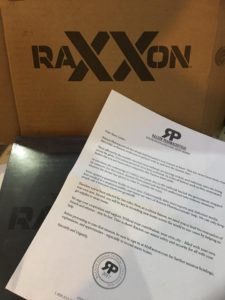 This isn’t a Kickstarter project, but it’s such a unique marketing tactic by Plaid Hat Games that I had to talk about it. There’s a detailed article about it here.

A few weeks ago, 50 people all over the world received a mysterious box from a fictitious company called Raxxon Pharmaceutical. The box contains a game–Raxxon–and instructions that talk about a virus outbreak. You’re told that the box contains materials needed to “lead the evacuation.”

Here’s the really intriguing part: Raxxon isn’t a game that’s in distribution. In fact, the only way to buy the game is for someone who already has it to “recruit” you. If you buy a copy of Raxxon, you’re allowed to invited 3 people, and they’re then allowed to buy the game and invite 3 more people, and so on.

I’m fascinated by this. It’s a bold move, to depend this heavily on invite-only marketing. But the behavioral psychology behind it is really clever–you feel special if you get an invite, and you feel powerful and influential when you have invites to give. It’s no wonder that the game has spread as quickly as the virus it represents: 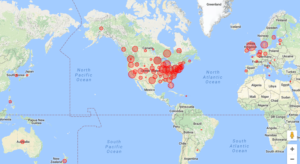 The main downside, as I learned from reading a post in a game industry Facebook group, is that it puts retailers in a very awkward position. If people go to a retailer asking for a game they’ve been hearing about and the retailer can’t get the game, they’re not going to be happy. Perhaps they’re forgiving of it, though, given that Plaid Hat has made other games that have sold very well for retailers.

Have you seen other companies (game companies or other industries) successfully use this type of viral, invite-only marketing?