First, my apologies for the test post you may have received in your e-mail this morning. I’ve talked to our web developer about it, and it won’t happen again.

Second, I heard from a reader that he isn’t receiving notifications after commenting and selecting “Subscribe to comments for this post.” If you comment on this post, please do me a favor and check that box. If you don’t receive an e-mail notification the next time someone comments, let me know, as that will indicate it’s a global issue. 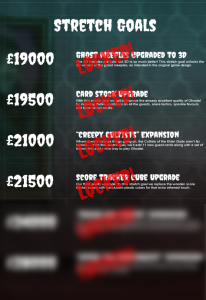 Thematic $1 Reward: If you’ve read my Kickstarter Lessons for a while, you already know about my love for thematic $1 rewards. Ghostel–a game about scaring away hotel guests–has a great implementation of this type of reward: “Everyone who backs at this level and above will be toasted a personal thank you via video…filmed at night in a haunted location…alone…in the dark…”

Blurry Stretch Goal Chart: I really like Ghostel’s stretch goal chart. Even without the explanation, it’s clear to me that (a) they’ve properly planned out their stretch goals, (b) we’re focusing on the next few goals for now, (c) there are exactly 2 more stretch goals waiting to be revealed. I’d like to use this method in the future.

Personal Investment: The stretch goal chart on the ADAPT project does something I’ve never seen before: It’s completely transparent about the personal investment John has committed to the game to keep the funding level as low as possible. Many projects do this–in fact, it’s part of the formula I talk about for calculating your funding goal–but few ever tell backers exactly how much that personal commitment is. John’s innovation is to connect that amount to specific stretch goals. It’s a big chart, so I’ll just highlight it up until the break-even point below: 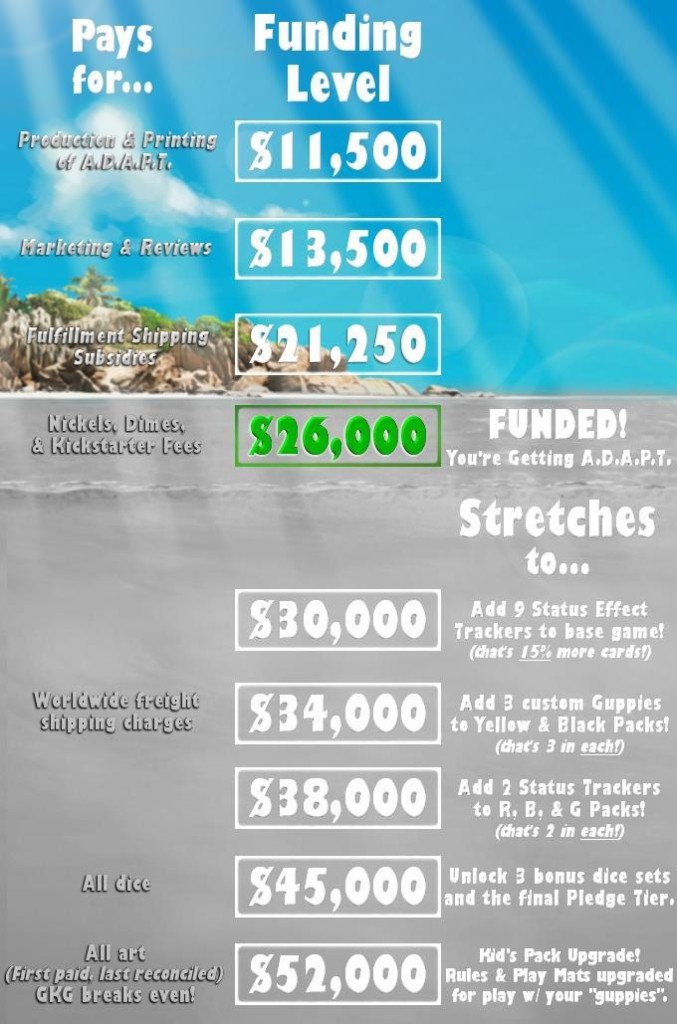 Using Visuals on a Non-Visual Project: In most project categories, the art and photos are an inherent part of the project page. I just talked about this the other day. But for literary projects, the project page could just be words. Other than the cover of the book, most books only contain words. This is a feature of books–it gives our imaginations the opportunity to fill in the visual gaps. However, on a Kickstarter page, most people need some sort of visual representation of the work to connect with it.

That’s where I think Richard at GAMUT was very clever to feature a number of illustrations that represent the work. They’re a little too far down the page (I’d put one at the top instead of the giant block quote), but I think most people will find them if they’re scrolling down. They’re quite evocative.

Escape Room in a Box

Refill Pack: I’ve been working on a legacy board game. “Legacy” means that as you play the game, you make permanent changes to the components (instead or resetting everything each time you play). This creates an incredible experience, but you can only do it once, unless you buy another copy (even though some of the components are redundant and unchanged). My plan for the Kickstarter was to offer a refill pack that would give backers two entire campaigns of the game for the price of one game.

So it was really neat to see today that Escape Room in the Box–another one-time gaming experience–offers a refill pack for their game. While this method won’t work for every legacy/one-time game, if it works, I think it creates a great value proposition to offer your early adopters.