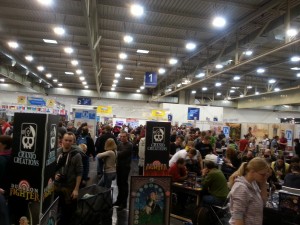 The number one question that European backers have asked me over the last year is: Are you going to Essen Spiel this year?

Essen Spiel (often referred to as “Essen” or “Spiel”) is a tremendously large gaming convention in Germany every October. GenCon, which I wrote about here after attending it for the first time in August, attracts about 50,000 people. Essen attracts more than 3 times as many people.

My answer to those backers so far has been, “No, but I hope to go next year!” Honestly, though, I’m daunted by the idea of going to Essen as a participant, much less a publisher and designer. So when my friend and fellow Kickstarter creator Emil Larsen, designer and publisher of Burning Suns (which recently raised over $100,000 on Kickstarter) told me he was going to Essen this year, I asked him if he would write a guest post upon his return. Emil has graciously obliged us with the following post and photos. 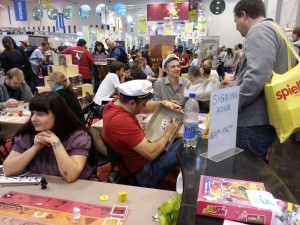 Thanks a lot Jamey, I’m happy to be talking about one of the greatest events in a year of board gaming :)

In short, Spiel is a 4 days fair of board-, card- and role-playing games taking place in Essen, Germany.

During these 4 days, almost 150,000 people visits the over 40,000 m^2 area of booths, play grounds, trading halls and gaming tables… and much more. But I’m not here to talk about Spiel numbers–I’m going to talk about Spiel from the perspective of a Kickstarter creator. What am I doing there? How do I approach a convention like Spiel and what did I get out of going there?

I hope it’ll be of inspiration for your own convention visits as a Kickstarter, because if you follow the trend, you’ll be there. I’ve never seen so many Kickstarter projects at a convention before, they came in all shapes and sizes: Failed, newly funded, 2 years delayed and some games that were still running on Kickstarter.

As a newly funded Kickstarter, I didn’t have anything physical to sell or much to promote. But I went to Spiel for several important reasons: 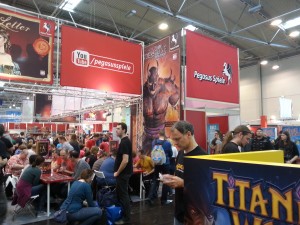 Now, as cliché as this might sound, as a newcomer to the industry, one of the key elements to success is building a strong network. So with my Kickstarter project already concluded, I didn’t go to Essen to find new customers, I went there with a goal of getting to know as many people as possible. This means talking to a LOT of people, and being open for conversations every minute you’re there.

Keep the following pointers in mind if you want to do the same thing. 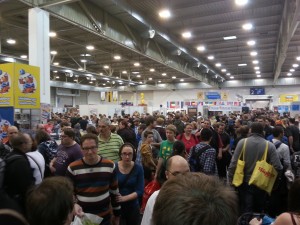 You can’t prepare for being a publisher or game creator with a booth, if you have no knowledge about how things work at the event. Both this time and last year I experienced booths with no people or attention at all, which I’ll be so bold to narrow down to “lack of preparation”. If you’ve been to a convention you’ll have a pretty good idea of why you did or didn’t enter a booth.

Well, though I really have a hard time talking in terms of competitors in the board game industry, since it’s a place with so many great people and room for so many cool ideas and themes. There’s really no way around it, you’ll be swimming in a red ocean of people trying to convince you to give them your money. I also went to Essen to look at the competition I’m up against, both within and outside of my theme/genre. 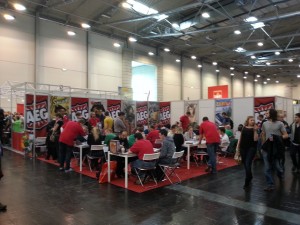 Essen is pretty famous for Sunday sales and it’s understandable. From Saturday to Sunday things go pretty bananas, and cardboard is everywhere! I also snug in to capture a few cheap copies of essential prototype parts.

I think this pretty much covers my experience with Spiel in Essen 2013, it was a great event. I had a lot of fun with it, and next year I’ll hopefully return with a booth for Burning Suns. :)

How was your experience in Essen?