In this series, I highlight some of the interesting choices made by current crowdfunders regarding their project’s reward levels, stretch goals, and overall campaign design (the projects themselves, not the content or product). This isn’t an endorsement or promotion.

I’ve watched a lot of great Kickstarter videos. Heck, I think Scythe had a great video, thanks to Josh McDowell. But I have to say that I think Vengeance has the best project video for a board game I’ve ever seen.

It’s a little graphic, but if you’ve seen the movie Kill Bill, you can handle it. Watch how the video mixes the narrative with rules and gameplay, all at the same time. It’s completely seamless. It also conveys how well the theme is integrated into the mechanisms. 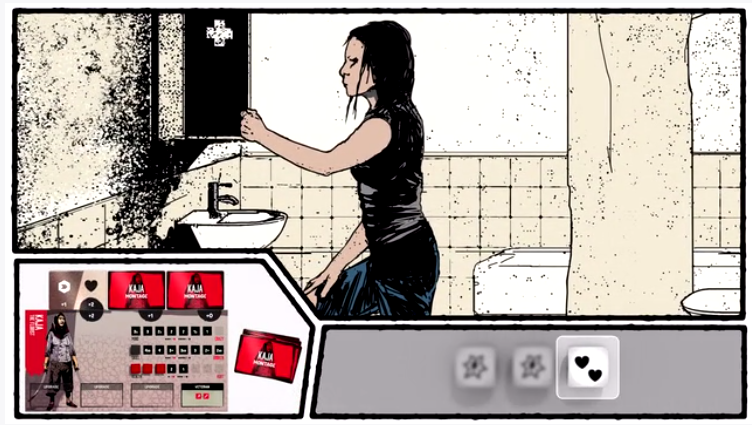 A few weeks into the Fidget Cube campaign–when it had raised about $3 million–I e-mail Adam at Kicktraq to see if he knew what had happened about a week into the project. That’s when the project went from earning tens of thousands to millions, seemingly overnight.

As it turned out, that’s when the Fidget Cube got picked up by two significant media outlets: The Awesomer and Digital Trends. But how did those outlets find out about it?

I’m not sure. But I do know that the Fidget Cube does something really clever on the project page to make it easy for media outlets to feature it: It includes a big button high up on the project page that provides all press materials in one place. Richard at Board Game Authority describes the utility of this feature at this point in his fantastic video dissection of the project.

I also really like the sharing button directly below the press kit button:

There are a few interesting things happening in the reward sidebar of Chimera Station. The first is that there are different rewards for English, Chinese, Brazilian (Portuguese), and German versions of the game. The descriptions are each in those specific languages, as TMG is partnering with international publishers to create multiple localized versions of the game in the first print run (which I don’t actually recommend, but TMG knows what they’re doing).

The other thing is the specific wording of the future availability of the special deluxe version of the game. I like that there’s absolute clarity right in the reward level about how many copies are being made and to whom they might be sold post-Kickstarter: 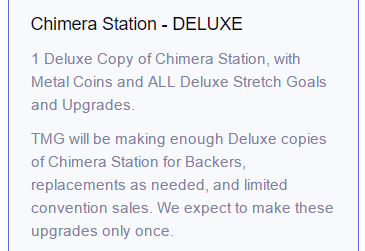 A few days ago on Facebook, a poll appeared in my feed via The Boardgame Group. From what I can tell, the designers of the upcoming game, Biohazard, were sharing a question in a number of different groups. Within reason, this is the type of “promotion” I really like, because instead of just blasting “Hey, like/support my thing!”, they’re engaging people by asking an interesting question.

It’s how they asked the question that really intrigued me. You can see it in the image below. They created an image of 3 different versions of their dice and edited in images of 3 of Facebook’s buttons. In this case, the buttons don’t retain their intended meaning; rather, it’s a polling device.

In fact, I’ll say that it’s a brilliant polling device. First, it’s seamlessly integrates with the graphic. Second, it’s super easy to click one of the buttons. Third, other than the image editing (which you’d have to do anyway for a visual poll), it’s actually easier to set up than an actual poll. Fourth, it’s not immediately apparent what other people have voted on, so there’s no majority bias. This is really, really clever.

Here’s one more Facebook technique. It’s not new–people have been using Facebook events for Kickstarter launches for quite some time–but it’s only recently that Facebook has allowed you to respond to an event by clicking “Interested” instead of “Going.” For some reason I found that much more compelling than “Going,” which felt like too strong of a commitment for something I’m just curious about.

Also, I really like the use of the Facebook event system because it allows for flexibility in changing the launch date without any confusion. Skyways changed their launch date a few days ago, and I got a notification about it. Now, as I’ve noted before, people hardly ever care if you move your launch date–so don’t launch if you’re not ready!–but for those who do care, now they can easily stay in the loop.

These projects represent a small sliver of unique crowdfunding innovations. Feel free to add your thoughts about these projects or others in the comments!