5 Recent Innovations in the Kickstarter World

I’ve seen nice timelines on project pages, but I don’t think I’ve ever seen such a detailed timeline after a campaign is complete as the one that Gino Brancazio created for his game, Ghostel. The timeline infographic on this page shows the date of every update, milestone, and benchmark starting from launch day and ending on their fulfillment deadline.

This is an insightful resource for any creator or backer who wants to see all of the steps and timeframes involved in running and completing a crowdfunding campaign, and I like that Gino shared it to coincide with the launch of Ghostel’s expansion campaign as a show of transparency and credibility.

I love when creators take the time to do a deep dive into the behind-the-scenes process of creating their Kickstarter page, particularly when it’s educational for other creators. The team behind the game Soheresone did this with a detailed article on Medium about how they created their polished project video with no experience and on a very limited budget. The article is definitely worth checking out if you’re looking for some innovative ways to film a project video.

This roleplaying game is doing something I’ve never seen before on a project. On one of their early project updates (and continuing through others), they encouraged backers to tell their character’s story as it relates to a village called Ellomyr in the Numenera world. Backers were invited to use the comments section on Kickstarter or social media to tell their story, and the creators of the game might share the story or even add it to the sourcebook.

Basically, they set aside a village to be occupied by backers. How cool is that? It engages backers in a really unique way, and the meta-level it adds to the game itself is neat too. 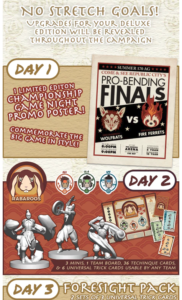 The Legend of Korra

IDW did something unique with their latest Kickstarter project: Instead of stretch goals as a source of engaging backers throughout the campaign, they decided in advance to include a ton of stuff in the deluxe version of the game, and they simply revealed deluxe elements every day.

I really like several aspects of this. The first is that they committed up front to making the best, most deluxe version of the game–they didn’t ask for backers to “earn” it. The second is that they created the feeling of the game getting better and better every day of the campaign without the arbitrary nature of stretch goal thresholds. The third is that they gave backers a reason to return to the project page every day to see all of the new stuff they’re getting.

Ever since I stopped using Kickstarter, I don’t have my own stock of games at fulfillment centers around the world, making it very expensive to ship games to international reviewers. So I recently tested out a collective called Board Game Exposure in the UK that seeks to address that issue for non-UK creators.

The basic idea is that you can send a single copy of a game to one address in the UK, and the reviewers in the collective will each play the game, review it, and ship it to another person in the collective to play and review. And so on until your game has been played and reviewed by up to 5 reviewers (this number may grow).

I tested this concept by sending one copy of each of our games to Board Game Exposure, and the system worked remarkably well. Over the next month and a half, I saw reviews of these games posted every couple of days, as there were 5 different reviewers playing and reviewing 4 different games, all for the shipping cost to me of one carton to the UK. It was absolutely worth the money, and I would definitely do it again, especially if I could consolidate a few different games into the shipment.

I’d love to see similar collectives spring up in other parts of the world. It benefits Kickstarter creators, publishers like me, and reviewers who are trying to build their audiences (though it’s important that you’ve already started to build your audience–read this to learn more).

What do you think about these innovations? Have you seen any other interesting innovations on Kickstarter lately? To read more articles like this, here’s the master list.

9 Comments on “5 Recent Innovations in the Kickstarter World”