5 Surprises from Our Demographic Survey

If you’re looking for the results of the 2018 survey, please click here.

Last week on the Stonemaier Games monthly e-newsletter, I shared a demographic survey with our 30k subscribers. The intent was to learn more about the people who follow Stonemaier Games beyond those who engage with us on social media. I focused on questions with actionable results.

I learned a lot from the survey, the results of which featured a few surprises. Today I’ll share that data with you along with my conclusions and questions.

I asked this question because I think it’s important to the long-term success of Stonemaier Games if our games are appealing to all genders. The same could be said for other types of diversity–hence why Charterstone features characters of different genders, races, and ages–but gender seemed the most actionable.

The survey asked if a person was male, female, or other (a write-in result). I have to admit that I was REALLY surprised by how few women filled out the survey compared to men. We had enough responses to make me think this is indicative of our overall subscribers. The weekly game night I host is almost 50/50 men/women, so even though I know that isn’t normal, I thought this data would be closer.

But the results are skewed enough that it indicates a significant imbalance between male and female Stonemaier Games fans. Why do you think that is, and what can we do about it? 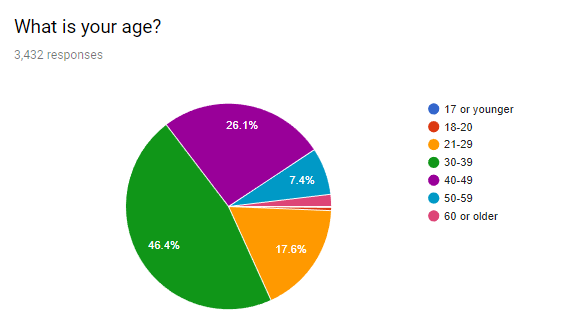 I asked this question because I thought it might illuminate our core audience and reveal some gaps. Sure enough, there’s a huge audience missing: those who are 20 or younger.

There was a time when we discussed an initiative to target college students. Perhaps we should have pursued that, or perhaps it would have just been a waste of time. I often recommend to Kickstarter creators that they focus on the backers they have instead of those they don’t have. The same applies here.

What do you think this data reveals? 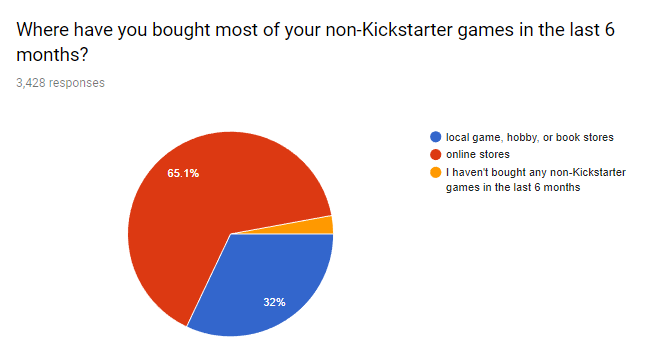 I asked this specific question because I’ve had lots of discussions over the last few months about local vs. online stores and how we can support both without isolating either.

I would say that these results were a pleasant surprise. I think the game industry is healthiest when both local and online stores are viable, as they serve different purposes for different types of people. Even though it’s skewed towards online stores, 32% for local stores is still a significant number of people. It indicates to me that I should continue to support local stores while respecting the online stores’ market share (and our relationships with them).

Were you surprised by this result? What does it mean to you? I’m curious to see how these results change over time. 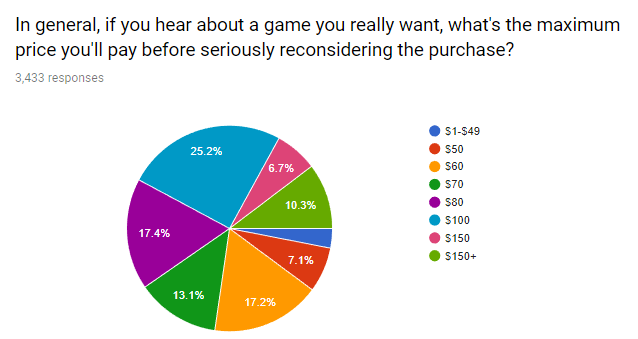 I asked this question because I’m fascinated by pricing economics, and I see different companies take different approaches with various degrees of success. You see a $10 game like Mint Delivery on Kickstarter raise over $100k, and on the opposite end of the spectrum you see Fantasy Flight say that “there is no maximum” price for Twilight Imperium 4th Edition.

This is also a question I ask to retailers and distributors: At what price point do they see a significant drop-off in sales?

This amount of flexibility for a must-have product is encouraging. To me, it means that we should continue to respect consumers’ wallets when we price games, because we’ll lose a significant chunk of people if we don’t. However, it also means that if we want to release a truly premium mass-market product, there’s a significant audience for it.

What did you learn from this data?

Finally, the last question of the survey was about whether or not people would fill out a survey if there wasn’t an incentive to do so (we offered a Token Trilogy to one lucky winner). I rarely give away our products for free (we don’t do or support giveaways or raffles) unless there’s a specific return on investment. In this case, the ROI is information–without the incentive, 950 fewer people would have responded to the survey.

I hope this data was helpful for you, and I look forward to hearing your insights and interpretations in the comments!

100 Comments on “5 Surprises from Our Demographic Survey”