In this series, I highlight some of the interesting choices made by recent crowdfunders regarding their project’s reward levels, stretch goals, and overall campaign design (the projects themselves, not the content or product). This isn’t an endorsement or promotion.

Cytosis: A Cell Biology Board Game 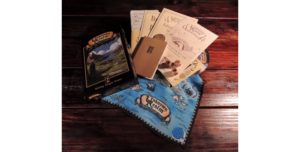 Unknown Realm: An 8-Bit RPG for PC and Commodore 64

I’d love to hear your thoughts in the comments on the projects mentioned in this post, as well as any other projects you’ve seen recently that have been thought-provoking.