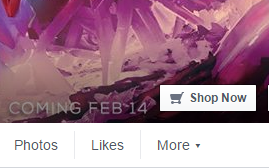 There’s a lot to be impressed with on the Entropy project page–if you want to learn how to feature card art on a project page, look no further than Entropy.

The element that intrigues me the most, though, isn’t on the project page. It’s on the company’s Facebook page, where they’ve activated a new FB feature that allows you to link directly to a website of your choice at the top of the page. I think this could be a huge asset for creators both during and after the campaign.

Allen Chang, one of the creators of Entropy, recently posted an update on his previous project that shares some really helpful statistics. I’d highly recommend checking it out. The comment below from Allen really resonates with me:

“Alistair and I didn’t just want to design and publish a game. Kickstarter is a unique platform that allows us to share our love and passion for games with a community of like-minded folks that are willing to give creators a chance. We wanted to leverage the platform for what it’s meant for and fully embrace the spirit of grassroots crowdfunding.” 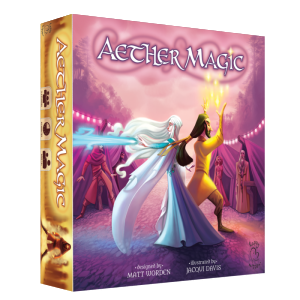 Aether Magic is a beautifully illustrated game from Happy Mitten Games, who have been more intentional than any other creator I’ve seen about building up a wealth of content leading into the campaign. They had a good first day, but they saw a big drop in pledges on day 2. They impressed me by responded to this decrease (which was more than the typical day 2 drop) by posting a vulnerable update to ask backers if there was something inherently wrong with the project. It takes a lot of guts to do this, especially so early in the project, but it shows that they truly value backer feedback and want to make the project (and product) as good as it can be. 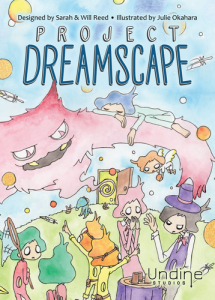 In a complete coincidence, just as I was about to write this paragraph, the creator of Project Dreamscape (Ben Haskett) sent me a message to thank me for my pledge. I really can’t emphasize enough the power of individual outreach to backers–it goes a long way.

What I was going to write about Project Dreamscape is that I like how Ben featured the designers on the project page. There have been plenty of tabletop game campaigns where the project creator is not the game designer, but I don’t think I’ve ever seen a project feature the designers better than this one. Ben tells the story of how he met the designers, describes the evolution of the game, features a photo of them, and lists links to the “designer diaries.” As a backer, I feel directly connected to the entire story of the game now. 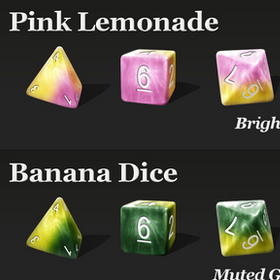 John Wrot, creator of The King’s Armory and crowdfunding innovator, is back with a campaign for beautiful dice. There’s a lot to like about the project, but my favorite part is that backers have the power to vote on new color combinations for the dice. I think that’s a cool way to involve backers in the creation of the product. 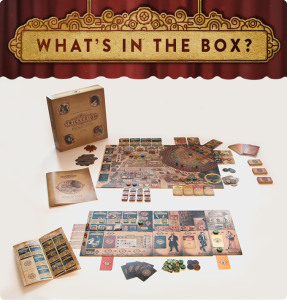 Trickerion, one of the hottest games on Kickstarter right now, got off to a fast start for many reasons: evocative art, positive reviews, tons of components at a great price, etc.

Note that early bird rewards are missing from that list…yet another reminder that there are much more powerful and welcoming ways to get early support on a project (even for first-time creators like the people behind Trickerion).

On Trickerion, if the project was successfully funded in the first week, every copy of the game would get 4 new roles (twice the number as the original). This provided a huge incentive for people to back now instead of later and to share the project with friends.

Luke at Across the Board Games says it better in this post than I will, but I’ll summarize here: Matthew Inman has done a fantastic job of building an audience through his web comic The Oatmeal, and that audience was there for him on launch day. And not as an act of charity–he offered that audience a physical product that would appeal to their sense of humor. If you build an audience over time and eventually offer them something on-brand through a crowdfunding campaign, there is a very good chance the audience will show their support for you.

7. Conan and Ghostbusters: leveraging an IP

Taking a well-known brand and turning it into a game (or other product) can have a big impact on a campaign. The Conan or Ghostbusters games could have been generic games about barbarians and ghost hunters, but the creators licensed the IPs instead. In doing so, they exponentially appealed to the crossover audiences (people who like Conan and/or people who like games), causing the projects to go big. Also, miniatures.

8. Tiny Epic Galaxies: charging a shipping fee to US backers

Michael Co made a bold move on his recently funded Tiny Epic Galaxies campaign–he charged a shipping fee to US backers. It’s only $2, but Michael didn’t wrap it into the cost of the game as many would have done.

I really admire this approach because I think US backers (including myself) have some trouble distinguishing the true value of the reward because shipping is included in the price. If a $50 MSRP game has a $49 reward price, it’s not very appealing to backers because it looks like it’s so close to the MSRP. But really there’s about $10 for shipping built into that price.

Granted, from the backer perspective, what matters to them is the amount of money they’re paying out of pocket. Thus it’s still important for creators to establish appealing price points (among all the other things they can do to make a project exciting). But I think it helps to show backers exactly where their money is going by separating shipping from the reward cost in some way–not necessarily the way Michael did it (I’m not as bold as him, though Michael did tell me that US backers were completely accepting of the shipping fee), but in some way.

Which of these innovative Kickstarter concepts resonates the most with you?