A Heroic Attempt: A Close Look at a Current Kickstarter

A few days ago, a creator reached out to me with an compelling message: Wesley Woodbury of FunDaMental Games sent me a list of 3 unique elements of his current Kickstarter campaign, Legends of Novus. I have an open invitation for creators to do this, but few follow through, so I thought I’d dig deeper into his project.

What I found was rather interesting. Legends of Novus has been live for 14 days, and its backers total is slowly increasing…but it hasn’t reached its funding goal. So in addition to sharing Wesley’s insights (along with my thoughts), I’m going to share some notes about why the project may not quite be on target to fund.

1 – Small Game Launch – Before attempting to launch a major boardgame, I created a small cardgame to gain a better understanding of how Kickstarter works, how community interactions work, developing manufacturing specs, etc. It was a short and small KS (Duel of the Dragons), and although this approach has been used by many, I still think it is relevant to share with new creators who attempt large games as a first launch. I logged a lot of my progress for my game creation through a blog, which I have shared with many (and have a link to on my websites).

[Jamey: While I think there are various factors to consider in selecting your first Kickstarter project, the “humble project” approach is one that has a proven track record for allowing a creator to learn the ropes and grow their audience without risking too much. I like that Wesley used this method, and I’m curious how many original backers are supporting Legends of Novus.]

2 – Pre-Game Delivery Offers – Within the pledges I have made available early offers that would be sent long before the actual game. One offer is an art/story book (would be delivered up to 4 months earlier than the game), another is the neoprene world map/game board (which could be used for other purposes, such as playing MTG on or using as a campaign map for DnD). This gives backers something sooner vs later, and can build excitement for the game over time.

[Jamey: I think this is an interesting strategy, though I don’t know if it has much of an impact on a project’s success. The main downside is that it creates more of a logistical hassle for the creator, especially if you’re shipping to hundreds or thousands of backers worldwide (I experienced this with my first Viticulture campaign, as I offered early shipping on wine glasses and custom engraved bottle openers.]

3 – Daily Update Video + Game Training – This goes against everything I have read or heard about for Kickstarter updates. It may even deter or cause some people to cancel their backing, but its hard to say how many. Each day I send a short email, accompanied by a 2-3 minute personal discussion, followed by a 4-8 minute video teaching and showing people more about Legends of Novus. Only so much can be explained in a short campaign, and most people would not waste their time watching an hour long play video, so this breaks it into smaller, digestable chunks. Although there may only be a 10% consumption rate of the video, I believe it raises the engagement of those backers, who may be more inclined to share the KS and want it to succeed.

[Jamey: It sounds like Wesley is aware of the potential downsides. I think this method is fine as long as backers have the option to watch a full playthrough video from Day 1 on the project page, whether it’s made by Wesley or a content creator.] 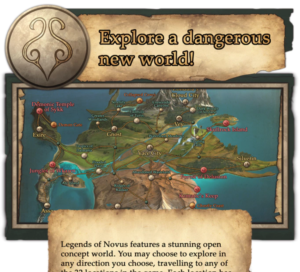 Despite the foresight and planning Wesley put into this project, it’s struggling to fund. I appreciate how open and vulnerable he is, though, as he even joined Richard Bliss recently for a frank discussion about the campaign. They invited people to share their thoughts on why the project is struggling, and I think several of the results are worth sharing with other creators (my notes follow each suggestion):

I really appreciate Wesley’s vulnerability and openness in sharing a peek behind the curtain at his project, and I hope you gained something of value by reading this. Feel free to check out Legends of Novus and share your thoughts!

If you gain value from the 100 articles Jamey publishes on his blog each year, please consider championing this content.

21 Comments on “A Heroic Attempt: A Close Look at a Current Kickstarter”