A Key to the Stars: A Guest Post by Tau Ceti Designer Mike Strickland

I recently noticed that longtime reader and commenter Mike Strickland had launched a project that he had been working on and carefully planning for a long time. I reached out to Mike to share his insights, and he proceeded to write this great guest post. Thanks Mike! 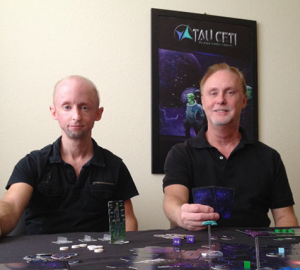 Hello! We are Stan and Mike Strickland, a father and son team of game designers and founders of Outer Limit Games. We reside in hot and sunny Estero, Florida where we enjoy spending time with our family (which also includes our 3 beloved Shelties).

My dad Stan, is a meteorologist and was a science teacher for 25 years, and designed and published his first board game in 1988. I’m a freelance web and graphic designer, and also an electronic music producer.  Together we have started several businesses, but we are most excited about our new found passion – TAU CETI.

Designing and publishing a sci-fi game is something we have both conceptualized, dreamed about, and have been planning for a long time, so we are really excited to be at this point.  We would like to share a few things we did while building up to our campaign, some mistakes we made, and what we learned during our first week on Kickstarter.

3 Important Things We Did Pre-Launch 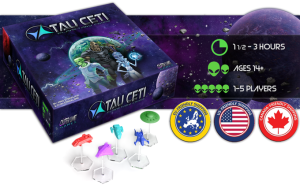 We Were Very Active on Social Media Specific to Our Project

When we first started designing our game, we knew it would be vital to get some feedback for other gamers, especially knowing we were new to the game design scene.  We knew Board Game Geek was the place to get that feedback, so we began posting bits about our game in some of the game design forums there, and the feedback we received from fellow gamers was extremely helpful, and kept us focused and on the right track at all times during the game design phase.

Once we started thinking more about Kickstarter, we began engaging on a regular basis on various tabletop gaming and Kickstarter advice Facebook groups.  We posted questions with regards mostly to our art, and information pertaining to Kickstarter in general.  Again, most of the feedback we received there was very informative and kept us going in the right direction. It felt good to get that reassurance as new project creators.

It’s also important to mention, that while we asked for feedback and advice from these communities, we equally returned the favor to others seeking advice. We’re all in this together, and we all want to succeed, so if your experience could potentially help someone else, why not share it?

We Did Our Research

We took a year to study projects that did well on Kickstarter, projects that didn’t, what art styles were most popular, etc.  This ultimately guided us in developing TAU CETI into a game that would appeal to the Kickstarter tabletop gaming market, because after all, we wanted our game to sell.

We Built Value into Our Project

We closely studied other Kickstarter projects that were successful, their level of art and what was included in their game for the price if was offered at, and compared it with what we were going to offer.  Does your price convey value?  Would you buy it if you were someone else?

Something we probably would have done differently is price our base game $60 instead of $59.  Reason being, we ended up deciding to offer a Special Edition of our game at the last minute (one of the best decisions we made), which would be priced at $79 as we wanted it to be the reward tier with the higher value.  However, this was after we had already sent out an e-newsletter informing our subscribers that we would offer the base game at $59, so we didn’t want to change it after the fact.

Our reasoning for this is, by having only the Special Edition priced with a “9”, it automatically creates a higher perceived value, thereby encouraging more people to back that reward level.  Nevertheless, we haven’t noticed the $59 game taking away from the significance of the $79 game.  In fact, we have almost 6 times as many backers going for the $79 game than the $59 game.  So ultimately we successfully built more value into our Special Edition, which was our intent.

Here is how we built value into our Special Edition: by offering an expansion which includes a special miniature not included in the base game (which is also not a Kickstarter Exclusive), plus 16 custom dice (which are Kickstarter exclusive), for only $20 extra.

I remember discussing exclusivity with Jamey in his blog “10 Better Reasons than KS exclusives to Back a KS project”, and the consensus was that KS exclusives should not be anything that affects the game play [Jamey: Technically I advocate using promos that can be made available for a price post-Kickstarter instead of exclusives].

If someone discovers your game after Kickstarter, and cannot get the full game experience because part of it was a Kickstarter exclusive, they are going to be disappointed.  So, the idea is to only offer things that don’t affect game play as exclusive. In our case, we offered custom dice with an alternate look. 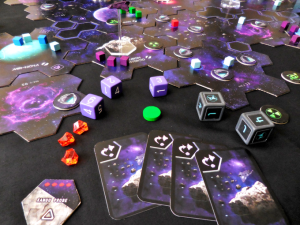 Perhaps We Should Have Started with a Smaller Project

We really wanted to make an impact by making an epic game right off the bat, and that’s probably fine if you already have a huge following.  Otherwise, we wouldn’t recommend going big if it’s your first project, as it’s only going to make reaching your funding goal that much more challenging.

We were already aware that launching in the summer is probably not the best time, as statistically summer months are a bit slower on Kickstarter.

We knew we were close enough to that point, but we hadn’t anticipated some of the other factors that came into play our first week, so in that respect, we could have been more prepared.

To our surprise, Kickstarter was highly saturated when we launched.  We hadn’t taken the time to observe the competitive environment around us, because we were so hyper focused on getting our own campaign ready.

Needless to say, we quickly found ourselves in a pool of well over 200 tabletop games, many of which were highly anticipated games from industry giants.  It’s not a position you want to be in as a first time publisher who nobody has hardly heard of.

While we tried to build up some hype for our game on Board Game Geek, and some other game blogs and relevant social media groups early on, we should have done even more to build our crowd given the scope of our project.

One thing we could have done was get our physical prototype more exposure, and in the hands of more people.  Sure, we play tested it a lot with local game groups, but we would have liked to have visited some game cons, and had even more reviews.

3 Things We Learned in Our First Week 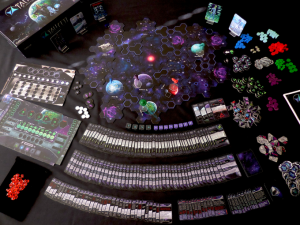 Weekends Can Be SLOW

Mid-week is statistically a good time to launch your project, so we launched on a Wednesday morning. Our first two days were great, but we weren’t prepared for the sudden drop in activity on Friday. Going into a weekend (especially a holiday weekend) after you’ve just come off of the first 48 hour high can be a bit overwhelming if you’re not expecting it.

We didn’t expect activity to decline so dramatically after our first 48 hours, so we didn’t have a plan in place on how to address it.  We should have anticipated that the mid-campaign slump could hit earlier than expected.

We found ourselves scrambling to quickly boost momentum, so we came up with a micro goal on our 6th day into the campaign.  Ideally, we should have already had some micro goals set up on launch day, so backers would have an immediate and obtainable goal to reach right from the start, thereby keeping the much needed momentum going.

Get as many friends and family to pledge $1 as you can, on day one.  This is something we learned from John Coveyou of Genius Games on his blog.  So, we were already aware of the importance of getting lots of individual backers to pledge $1 on day on.  It’s not much to ask of someone, so it’s easy, everyone can do it and it’s highly effective in getting momentum and exposure early on.

However, we should have better explained and emphasized the importance and urgency of why pledging $1 on the first day was so important.  While many of our friends and family did pledge on day 1, a good portion of people we know waited a few days later, and many still haven’t pledged, and that’s perfectly okay.

If we were clearer in explaining the significance of the first day to people we know (many of which are not familiar with Kickstarter to begin with), perhaps we could have gained a better foundation going into our second week.

Thanks Mike (and Stan) for sharing these thoughts about your project, Tau Ceti!

5 Comments on “A Key to the Stars: A Guest Post by Tau Ceti Designer Mike Strickland”