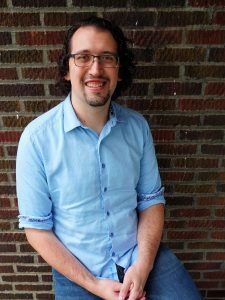 Alex Schmidt is the Director of Sales for Stonemaier Games, managing Stonemaier’s relationships with distributors, retailers, and localization partners.

Games have been part of Alex’s life since as long as he can remember. Growing up with nerdy parents, he began playing chess and D&D before he was five-years-old. That quickly spiraled into other games such as Civilization and SPI’s War of the Ring.

Since then, his love of gaming has continued to develop with the industry and he’s always ready to try something new. While he considers himself an omni-gamer and likes pretty much any kind of game, ultimately his greatest passion for games comes from the stories they tell and the memories built with friends while playing them.

After graduating from the University of Washington (in Seattle) with a BA in Drama, Alex moved to St. Louis which led to unexpected opportunities. He first met Jamey when attending Stonemaier’s Design Day in 2016 and started regularly attending Jamey’s weekly game night the following spring.

In 2017, Alex joined Greater than Games where he first worked in the warehouse and then became an account manager, handling logistics and relationships with other companies, including Stonemaier Games. In 2020, Jamey asked Alex to join Stonemaier to directly handle their B2B customer relationships.

Alex lives in St. Louis with his wife (Tiffany) and their two cats (Cassandra and Tallis). To relax, he enjoys playing board games, RPGS, and video games, as well as reading and watching all things sci-fi and fantasy. He also spends some of his free time designing games and running a youtube channel where he offers advice to RPG players.

You can follow him on his personal twitter, where he’ll talk about whatever he happens to currently be excited about. Alex’s professional email is alex@stonemaiergames.com.