An Open Letter to Distributors and Retailers from Stonemaier Games

Distributors and retailers, we need to talk.

First, though, let’s bring everyone else up to speed, because most of my readers aren’t distributors or retailers. Here’s a quick summary of how the system works in the board game world: A publisher (like Stonemaier) creates a game and pays a manufacturer (like Panda) to produce it. The manufacturer typically ships it to one or more warehouses. From there, the game is sold and shipped to (a) consumers and (b) distributors, who then sell and ship the games to retailers (who sell to consumers).

A company like Stonemaier Games relies heavily on distributors and retailers to sell our games. 90% of the units we’ve sold over the last few years have gone through the distribution system (English and localization). The percentage may be different for a brand-new product, but in the long run over various reprints, retailers sell the vast majority of our games to consumers.

Publishers support retailers in different ways. Here are some of the ways Stonemaier Games does this:

The overall issue is demand forecasting. Publishers don’t know the demand for a new game until they announce it, reviewers discuss it, and people play it. And most importantly, demand is uncertain until people can actually buy it. Until then, the demand is purely hypothetical.

Yet, by the time you know what the demand is for a new game, it’s too late! The first printing of the game has been made, and it’ll be 3-4 months before the reprint arrives. So if demand is higher than supply, retailers and distributors aren’t happy. If supply is higher than demand, the publisher isn’t happy–especially if supply is WAY higher than demand and you have thousands of games gathering dust in your warehouse. 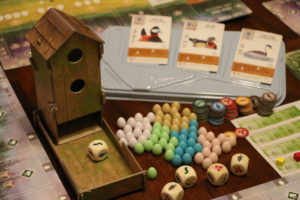 Let’s use a specific case in point: Wingspan.

Last summer, before we started manufacturing Wingspan, I reached out to a few distributors to ask how many copies they thought we should make of a bird-themed medium-weight Euro game. Even though these distributors had absolutely no incentive to go low–remember, all the risk is on us at this point–they all said that we should make 10,000 copies.

So we did. I printed 10,000 copies of Wingspan. But I was still a little worried, so just in case, I also made 5,000 sets of the non-printed components (the eggs, wooden tokens, plastic trays, etc). I figured if the game was a hit, having those components would speed up the reprint. And if the game was a flop, I hadn’t invested too much. As it turned out, when I saw the buzz around the game in early December, I immediately started the second print run.

The problem, as retailers learned this week, is the the demand for Wingspan is WAY higher than 10,000 units. I’ve been hearing from retailers that their distributors are only giving them 1 or 2 copies of the game even though they have 50 preorders.

Whose fault is this?

That’s the main reason I’m writing this post today. We’re all frustrated when demand is much higher than supply. And as a result, people look for someone to blame. But is that actually going to help anyone? I don’t think so.

I’d much rather focus on solutions, even though I don’t have a solution for this particular problem. None of us know what the demand for a game will be until the complete information about the finished product is available.

And no, I don’t think Kickstarter is the answer. Kickstarter is great at gauging direct-to-consumer early adopter demand, but it still doesn’t help predict future demand after consumers/reviewers have received and played the final product. (Update: Some people have mentioned the P500 system, which is very clever and may work for some publishers, but I don’t think it works for us. Here’s why.)

That said, I’m sorry. I truly wish that I could have done a better job at forecasting demand. I wish I could say I have a foolproof method for the future, but I don’t have the luxury of printing 30,000 copies of a new game. I simply don’t have the resources, and even if I had the resources, it wouldn’t be worth the risk.

Thanks for considering my thoughts today, and I hope we can move forward in a positive, constructive way.

Click here for a follow-up podcast on this topic with Who What Why.