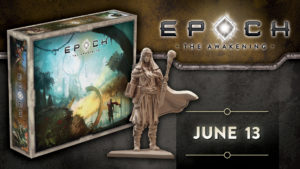 I’m pretty sure this is how I met Marc: He posted some insightful comments on this blog in the fall, and I was curious about the game he mentioned. So I checked out the Orange Nebula website and found a really beautiful home base for a game that instantly captured my imagination. I signed up for his e-newsletter on the spot, because I wanted to know more.

Marc’s game, Epoch: The Awakening, launched on Kickstarter this week. He kindly wrote a guest post about passion to share with my readers. I look forward to hearing what you think in the comments!

We all know someone who’s been victimized by an infomercial…coerced into pulling out their credit card late at night after a long day. it’s embarrassing to say the least, mainly because there’s shameful buyer’s remorse whenever the package arrives.

This isn’t one of those stories. This one is a success story…one I’m glad to share because I stumbled across something awesome, offered by a company who knows a few things about running a crowdfunding project.

It started with me scrounging around for birthday gifts online. As one of those so-called-creative-type-guys I spend way too much time lost in the inter-webs, clicking for clever things to bestow on my friends that they could never find elsewhere. You know…custom hand-made iPad cases. Or screen-printed posters with rockets and spacemen from the 50s with big blasters and bubble helmets. What have you. And, of course, I love me some Kickstarter, which is the perfect place to find inspiring new ideas, whether or not you back the projects. It’s not really shopping for me, it’s hunting.

When I’m wearing my hunter’s cap, it’s easy to filter out the noise and scan for things that interest me in the hopes that I’ll uncover a treasure. Recently, I discovered one. It was an Ultimate Ladle from a company called GIR (Get It Right).

They had me in the first 8 seconds. This is saying a lot because I’m kind of a discerning, pain-in-the-rear consumer and I’m rarely sold on anything quickly. I’m also a branding guy so I see through most of the advertising trickery. These guys just nailed it. Here’s why:

They won my heart first.

Right out of the gate, the first words spoken in the video were, “Product design is really fun, and one of our favorite things is…”, which immediately set my expectation that this was going to be lighthearted and enjoyable. The passion came before the pitch. Then they continued, “…making tools that everybody has been asking for”. Brilliant. Not only do they love what they do, but they make things that others are clamoring for. The video went on to fill in all of the thoughtful details that went into the design, and I was awe-struck as I beheld the wonder and glory that only this brand of kitchen tools could bring.

Like anyone, I used both sides of my brain to process what I was seeing, so my lightning-fast emotional response happened before my slower logical brain had time to rationalize. Emotional branding. I’m not a sucker, they’re just super-smart. Charismatic campaigns like this one tell the truth and show what’s happening beneath the surface. When they revealed these things, they gave people a glimpse of their heart. In a crowded marketplace, that voice of authenticity helped them stand out. It reinforced all of the reasons they’re trustworthy. They didn’t try too hard to be “epic”, they were just real. Genuine. And that kind of sincerity is something I can get behind. 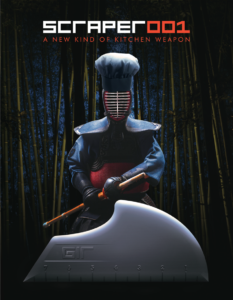 They offered something different.

All of this was a clever way to set the stage for what was next. Which was…a ladle. A ladle. I already had a ladle. I didn’t need a ladle. If I wanted a ladle, I can get a ladle at Target for 2 bucks. How many ladles does one need? Ahhh…but I didn’t have this ladle. It wasn’t merely better. It was uniquely valuable in the way it was engineered…take a look at the video at 1:17 and see for yourself.

The goal of brand-building is to set yourself apart from the competition, not stand them up next to you for comparison. If it weren’t for this, I would now feel sorry for other ladles. Chase Jarvis, Seattle area photographer and founder of Creative Live mentions a powerful perspective on being different instead of being better in this post:

“If you aim for ‘better’ that usually means you’re walking in the footsteps of someone else. There will often be someone better than you, someone making those footsteps you’re following… But if you target being different–thinking in new ways, creating new things–then you are blazing your own trail.” — Chase Jarvis

What makes the GIR ladle distinct — the enthusiasm and fire-filled “why” behind the project — is what captivated their audience and made 3,410 backers do something about it. In the end, showing how they were different led the conversation away from price, and brought it to the true, intangible values that only their brand can bring to the table.

They geeked out on their own stuff (aka Passion)

“We love it when you talk nerdy to us.” This is how they led into the technical specifications of the product. They presented simple, well-lit photography and created custom iconography for the various features of the products. They had all of the measurements and diagrams a curious mind could want. Then they slapped on a hefty lifetime warranty to seal the deal. Where’s the pledge button?! This is how crowdfunding should be.

Poor campaigns (we’ve all seen them) are filled with fluffy, corporate-speak that lacks substance. They’re rushed. They borrow content from other campaigns in an attempt to make promises they’ll likely never be able to deliver on. But this kind of passion is magical. It made their project come alive, allowing the audience to become spellbound just long enough to trust them. Who doesn’t want to be spellbound?

The bottom line:  what we say, how it looks, and how it makes people feel — they matter. These things have to intentionally reveal our heart, our distinctions, and our passion. If they do, we give our campaigns every opportunity to be the one thing we as crowdfunders desire most for them to be — sharable.

What’s a project you’ve backed due to the creator’s passion? How did they convey it?

Marc Neidlinger loves rockets, monsters, jelly beans, and his two giggling, twirling daughters. He’s a tabletop gamer, graphic designer, and pop culture geek. Having spent 20 years in the design industry, Marc is connected to a network of creative talent, including graphic designers, iconographers, illustrators, copywriters, and videographers, many of whom have contributed their talents to his tabletop board game, Epoch: The Awakening. He lives to craft inspiring stories that stir the hearts of those who watch them unfold.

11 Comments on “Authenticity, Passion, and a Squishy Red Ladle”