Backer Tip: How to Be Prepared for Fluctuating Currency Values 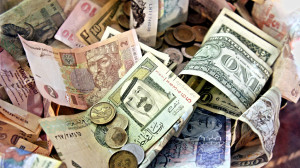 A few weeks ago, there was an interesting conversation on BoardGameGeek about exchange rates. It was posted by a future Scythe backer in Canada who bemoaned that the Canadian dollar is really weak right now, meaning that when their pledge is charged, the conversion from Canadian dollars to US dollars is going to make a big difference on their wallet.

I’ve heard this from backers around the world at different times for all of my projects, and I’ve started to wonder if there might be a solution for this. Do we need to leave ourselves to the whim of exchange rates? Could there be a better way?

I quickly learned through the BGG conversation that there was one person–Rob Crosby–who knows not just one, but several ways for backers around the world to safeguard themselves against fluctuating exchange rates. All of them require a little foresight, good timing, and some spare cash, but I think these are some really great ideas for backers to consider. Thanks Rob!

I’ll be talking about both Debit Cards and Credit Cards, so some points of reference as maybe some of the terminology is different depending on where you are in the world.  I can only use my experiences (from Australia) and I appreciate other folks in other countries may not be the same as mine, or call things different names, so let me clarify:

Credit Card – usually uses a branded provider (e.g. Visa or MasterCard) and loans you funds to pay for something now.  Many have a reward system (e.g. points or air miles etc) to encourage use, and often have an interest free period to repay the amount advanced (e.g. 30 or 55 days to pay back the “loan” after which interest accrues.

Debit Card – similar to a Credit Card, using a branded provider (e.g. Visa or MasterCard) but linked to a bank account and uses my own funds (i.e. savings/money in that linked bank account) instead of credit.

I will also be using the term “CC” and this encompasses both Debit Cards and Credit Cards generically.

OK, that out of the way, let me expand on what I’ve experienced in funding KS projects and for that matter, buying games from online game stores and private sellers around the world.

I can fund KS using my CC.  I actually have several linked, several Debit Cards as I prefer generally to use savings to buy a game, and one Credit Card if it works out better budget wise to buy now and pay later.

Whichever one I use, I am generally charged a Foreign Exchange fee (AUD to USD/EUR/GBP etc) that depends on the bank issuing the CC. It generally runs 3 – 5%.

Here are the various solutions I’m aware of:

One of the Debit Cards I referred to in my BGG post allows me to set up to 5 “wallets.” I can deposit/transfer cash to the main wallet, then transfer that to the other currencies when the exchange rate is good. Mine is issued by Virgin and actually piggybacks off my Virgin rewards card (think “frequent flyer card”), allowing me to earn points at various retailers/Virgin airlines etc.

One of the offerings from Virgin is this traveler’s card, which is basically a Visa Debit Card but with built in electronic wallets, so I can use it overseas or online in the relevant currency. It’s one of several I found on a quick search online, including this one and this one from the Australian post office.

The advantage of this sort of CC of course is that I can transfer funds between wallets as and when I need to or when the exchange rate is favourable.  There’s generally no fee (or it’s nominal).  The disadvantage is the exchange rate, whilst comparable to the FX fee changed by most banks, might potentially be slightly worse (depending of course on your bank).  I think my Virgin one charges 3% which sets it squarely in the very favourable range, but some might change more.

A second option is a Credit Card which offers free foreign exchange transactions.  There’s a couple here in Australia that don’t offer rewards but instead would allow me to buy online (or pay a KS pledge) in USD/EUR/GBP etc and not pay any fees for that transaction (thereby saving 3-5%). I’ve looked at getting on of these specifically for KS and for buying games from Europe and the USA, but haven’t yet got one as I am reluctant to have another CC. I personally prefer to use Debit Cards unless I have to as it allows me to budget better, but that’s just me.

Finally, PayPal itself allows me to transfer funds to wallets in different currencies. I noticed Mark’s post about a PayPal Credit Card on the BGG thread, which is necessary to pledge to a Kickstarter project (some creators allow for separate PayPal pledges during the project). PayPal Australia does not offer this and I think it’s because of our banking laws. Instead I am able to link a bank account to PayPal, so when paying funds can come out of those savings (similar in effect to a Debit Card).  I can of course also link any CC to it.

I have found PayPal convenient, but expensive (fees but more importantly the exchange rates).  For many folks though it’s their only option.  This can be an issue though since KS doesn’t take PayPal…. instead they either have to rely on the project creator accepting it separately (e.g. Stonemaier or Cephalofair) or they miss out.

Thanks again, Rob, for sharing your insights here. If readers have any questions or other creative ideas for avoiding nasty exchange rates, feel free to share in the comments!

Also, unrelated but interesting, fellow creator John Wrot is trying something interesting right now where backer build the project page with him before his latest project launches on Kickstarter. If that’s intriguing to you, check it out.

6 Comments on “Backer Tip: How to Be Prepared for Fluctuating Currency Values”