A few months ago I saw an interesting thread on a tabletop game Kickstarter Facebook group about a service called InDemand. One of the commenters, Vojkan Krstevski at Final Frontier Games, had experience using InDemand to collect pre-orders after both of his Kickstarter campaigns. He had some interesting data to share, so I invited him to write a guest post here to delve deeper into his experience. Thanks, Vojkan!

InDemand is an interesting new tool by Indiegogo. It serves as a hybrid between a regular crowdfunding page and a store front, and it’s typically used to collect pre-orders after a crowdfunding campaign on any platform.

We first used InDemand after our Cavern Tavern Kickstarter campaign: 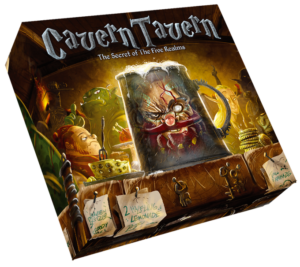 The campaign for Cavern Tavern, was pretty simple. We just had one version of the game, with no add-ons during the Kickstarter, and it was not that difficult for ourselves to sort out the pledges of each backer. That’s why we didn’t use a pledge manager, and we were pleased with the InDemand results.

Fast forward one year later to our Rise to Nobility campaign, which was much bigger. As this game was a sequel to Cavern Tavern, we offered both copies of the game, metal coins, custom dice and resources, 2 books based on the games…. You get the picture–it was a logistical nightmare without a pledge manager.

So, we decided to use a traditional pledge manager, redirect everyone over there, and also open up an InDemand page and see how it will go without doing anything to promote it. Just opened it up and forget about it. Here are the results:

As you can see from the data above, we managed to raise close to $5,000 from 64 backers. Almost all of this is from InDemand’s organic traffic (75% to be more precise).

We had a chat with Nate Murray, head of Gaming on IndieGogo, before our Rise to Nobility campaign and he said that they are working hard to promote InDemand projects and in fact they sent out an email blast to all of their backers (contributors) with a handful of tabletop projects. The result? $3,000 pledged on our page in one week.

The number of backers have slowed down since that email blast, but we still see a couple of backers on InDemand every week, even though every single social media post, every single KS update, and also the KS button, redirects to our pledge manager on CrowdOx.

What would the numbers be if we weren’t featured in that newsletter? My estimates would be around 70% less.

However, the fact remains that InDemand is bringing us customers that we weren’t able to reach. Or to be more precise, that we can’t reach. We pride ourselves in pre-campaign promotion of our Kickstarters, we start with heavy promotion of our games at least 5-6 months before the Kickstarter campaign, but there are still people that find out about our products on IndieGogo’s platform.

I’m aware that this is not a huge number, but also, it’s not something that needs to be underestimated. I remember how I “fought” for every single potential backer during promoting our first game, and seeing we have 60+ new customers brought by IndieGogo, without moving a finger from our side, is a big deal for us and the future of our company.

Key Points to Know About InDemand

Dan Letzring from Letiman Games sums up his experience on InDemand with the following: “I would say that my experience with IndieGoGo InDemand has been a positive one. It was really easy to set up and although I have only gotten a few new backers, I am happy to connect with new people regardless of the amount.”

These words are exactly how we feel about InDemand. If you are here for the long run, and you are just starting, you need to use every opportunity to introduce your company and products to new people. InDemand will help you do that, and it does not exclude other platforms from accepting pre-orders.

Do you have any recommendations for pre-order sites that can bring some amount of organic traffic?

9 Comments on “Casting a Wide Net Post-Kickstarter with InDemand”