This post is geared towards game designers/publishers and game reviewers.

For the first year or two of running my publishing company, I had no idea how promo items worked. I still don’t really know all that much, but I’ve learned a little, so I thought I’d share what I know with you.

There are lots of different meanings of “promo” items. In this case I’m specifically talking about components you create for reviewers.

For example, last year I was talking to Joel Eddy of Drive-Thru Review. He was preparing for a Kickstarter project for Season 5 of his YouTube channel, and one of us brought up the idea of a promo item for the campaign (I can’t remember who).

Up until that point, I had been really wary about this type of promo item, because (a) I felt weird creating something special for someone other than my Kickstarter backers (though Joel did back Tuscany) and (b) I had no idea how to make these promo items.

You see, board games are typically manufactured in minimum quantities of 1500. Sure, there are exceptions (card-only games can have 500 units), but that’s pretty rare. Joel didn’t need 1500 cards–his campaign ended up having 456 backers–and shipping a few boxes of cards from China would be quite expensive, not to mention the production costs of designing and illustrating the cards and laying out card sheets just for that one card.

Also, perhaps the most important thing is that the card stock of these promo cards needs to match the card stock in the game. This is harder to do than you might think. There are a number of different card stocks, thicknesses, textures, coatings, etc–they’re different for every manufacturer. It’s not like I could go to The Game Crafter for a short run of promo cards, as they wouldn’t fit into the game.

However, Joel came to me at a good time, well in advance of his campaign, which just happened to be before we started production on Tuscany. I contacted Panda to see if there was room on the Mama & Papa card sheet for a Papa Joel card (a second Papa Joel card, as my brother-in-law, Joel, is already in the game), and indeed there was. So I had our artist create a Joel Eddy card and we added it to the sheet without any other expense: 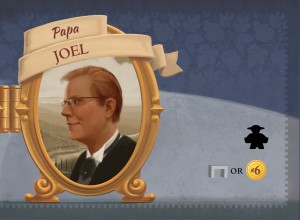 But wait, you say, what about my concern about creating something special that backers wouldn’t get? To ease my concern about this, I decided that the Papa Joel card would not be a gameplay change. Rather, I had Joel pick his favorite Papa Card, and we merely copied all elements of that card and put Joel’s face on it. So it was purely an aesthetic addition.

I took a similar approach when contributing to Rodney Smith’s Indiegogo campaign for Season 5 of Watch It Played (which is live until the end of September). I wanted to contribute a promo card that was a good fit for Rodney’s channel. Since he recently made a how-to-play video for Euphoria (for which we’re working on a new print run to coincide with the expansion release in 2016), I had artist Jacqui Davis create a moral dilemma card that is functionally the same as another moral dilemma in the game: 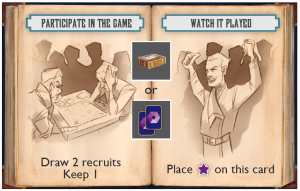 The one other promo card we made for a reviewer was for Forrest at Bower’s Board Game Corner. Forrest was our one of our featured reviewers for Between Two Cities, and he was preparing for a Kickstarter campaign for his YouTube channel.

It was a little too late to add the card to the Between Two Cities card sheet, and Forrest only needed 30 or so cards. So I turned to our friends at Print & Play Productions to see if they could print up just a few sheets of cards with a similar cardstock to the ivorycore Panda uses. We were in luck.

There aren’t any character cards in Between Two Cities, but we did have a fun set of seating randomizer cards. They’re not necessary to the game play, but it gives players a way to mix up their seating positions and perhaps have a laugh (or even learn something about each other) while doing so. I designed a card that would fit the personality of Bower’s Board Game Corner: 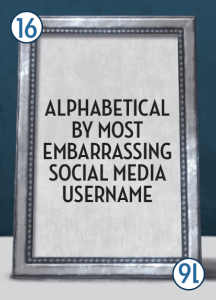 For you reviewers out there, there are two commonalities I want to point out about the three examples I gave:

As I mentioned, I’ve barely dipped my toes into the waters of promo components, so I’m sure other creators out there know more than I do. If you have experience with it or want to share your thoughts on these types of items, I’d love to hear your ideas in the comments.

Also, if you like replying to surveys about crowdfunding, a researcher recently contacted me with this link.