This weekend, Stonemaier Games hosted its fourth annual Design Day. On Saturday, various hosts in St. Louis (myself and a few others) held day-long game days at our homes. On Sunday, the Design Day itself featured 95 designers, playtesters, and gamers from St. Louis and around the country for 12 hours of playtesting and gaming.

The purpose of Design Day is to bring together designers and playtesters to give and receive feedback on game prototypes, expand their network within the gaming community, and learn from clever mechanisms in published games. If you’d like to know details about how the day is structured, you can read about previous Design Days here, here, and here. 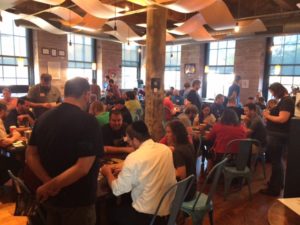 I thought about framing this entry as a Kickstarter Lesson. After all, the blog is about crowdfunding, so there are certainly some things to be learned from building community through events. I also thought about talking about events like this from a publisher perspective in terms of ROI (return on investment).

But the truth is, running an event isn’t for everyone. It takes a lot of time to organize and execute. It may not be fun for you. And I’m not so sure there is a direct ROI (or, at least, that’s not my motivation for hosting Design Day). 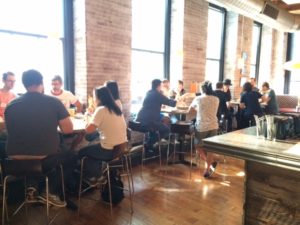 What Was Different This Year

Design 2017 was structurally similar to 2016, but there were a few key changes based on some new opportunities and feedback we got last year. 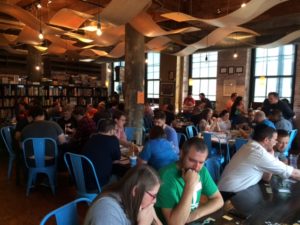 As playtesters tried out each prototype, they wrote down a 1-10 rating on a little card that would later become their ticket to the game giveaway. Design Day isn’t a competition, but the ratings are meant to help designers figure out how much work their games need.

These are the top-rated games (out of 33 total): 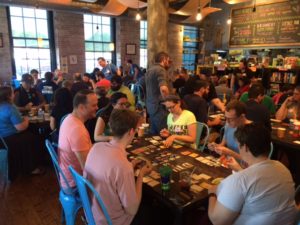 Have you found value in running or attending events related to your industry? If you want to attend Design Day next year, we’ll first give past attendees the chance to sign up, and we’ll announce any additional slots in our April e-newsletter.