This weekend, Stonemaier Games hosted its sixth annual Design Day. On Saturday, various hosts in St. Louis (myself and a few others) held day-long game days at our homes. On Sunday, the Design Day itself featured designers, playtesters, and gamers from St. Louis and around the country for 10+ hours of playtesting and gaming at Pieces Board Game Bar and Cafe.

The purpose of Design Day is to bring together designers and playtesters to give and receive feedback on game prototypes, expand their network within the gaming community, and learn from clever mechanisms in published games. If you’d like to know details about how the day is structured, you can read about previous Design Days here, here, here, here, and here. 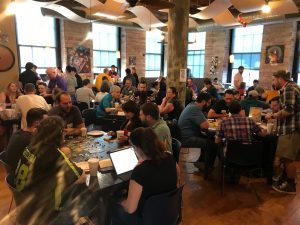 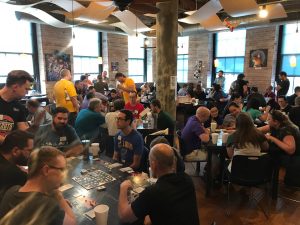 How Does Design Day Work?

We hit a sweet spot last year on a number of levels after taking a big leap forward, so we pretty much just replicated the same thing this year. I’ll share those core elements here: 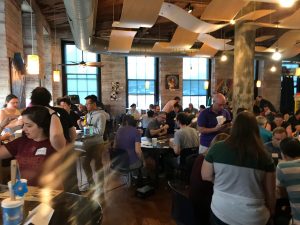 After playtesters tried out the 36 prototypes at Design Day), they wrote down a 1-10 rating on a little card. Design Day isn’t a competition; rather, the ratings are meant to help designers figure out how much work their games need (and perhaps they can offer those designers a boost of confidence or something quantifiable to show to a publisher or their Kickstarter backers).

Honey Buzz also finished with a great rating (8.89), but the designer and I decided in advance that, as a finished game, it wasn’t quite fair to include it among the prototypes (he was intending to bring an incomplete game per Design Day guidelines, but it fell through at the last minute). It’ll be on Kickstarter in a few weeks. 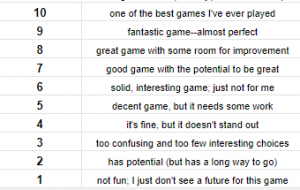 Have you found value in running or attending events related to your industry? If you want to attend Design Day next year, feel free to enter your e-mail on our “back in stock” notification, and we’ll announce any additional slots in our April e-newsletter.