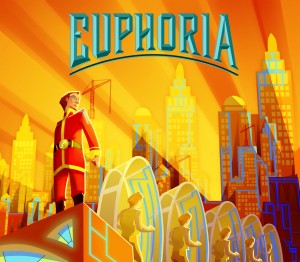 UPDATE: We appreciate all the votes, and the winner is clear. Euphoria: Build a Better Dystopia it is!

The tagline for our upcoming game, Euphoria, reads as follows: A dystopian cityscape awaits your leadership as you make strategic choices to construct buildings, strengthen allegiances, and expand your empire in this thematic game.

We’re currently trying to select the subtitle that will accompany the word “Euphoria” on the game box and the Kickstarter campaign, which will launch on May 15. Which subtitle works best for the game? Please vote below–your vote matters!