Fate Won’t Decide the Success of Your Kickstarter Relaunch–You Will: Insights from Jeff Cornelius

Two of the traits I admire in fellow Kickstarter creators is (a) generosity of information and (b) humility. Jeff Cornelius, creator of the Stones of Fate Kickstarter campaign, has both in spades.

Jeff originally launched Stones of Fate back in May ’13, and it did not successfully fund. But over the last 10 months, Jeff has spent his time not only improving the the campaign, but also sharing the process with others as he prepared to relaunch the project. Jeff has kindly agreed to share what he’s learned from running the relaunched project as he enters the final week of the campaign. Thanks Jeff!

What I’ve Learned From Running a Successful Relaunch Campaign

Stones of Fate (a light-strategy area control game) re-launched on Kickstarter on February 20. I have written extensively about what I learned after the initial Kickstarter failed to meet its goal. That can be found at Boardgamegeek and at The League of Gamemakers.

Many of these lessons I learned through really taking to heart what Jamey has to say here. You can imagine when Jamey offered me a guest post to talk about lessons I was learning during the re-launch, I jumped at the chance. Here are 3 things I have learned since the launch of Stones of Fate, 2 mistakes I made, and 2 things I have done right.

Lesson 1: A re-launch is a new project. You can’t rely on old marketing/followership

One of the big surprises with Stones of Fate has been that only about 38% of our original backers have come back to pledge to the new Stones of Fate.  I can attribute this to a number of things. Some people have just lost interest in Kickstarter. Also, Kickstarter is much bigger now and opportunities for people to back other games on a limited budget are plentiful.

Knowing this, I am very glad we spread the word to a whole new group of people before our campaign started. One thing we did was rely on old reviews from the first campaign. I wish we had gotten new, updated reviews from new reviewers as well as the same reviewers.

Our number of returning backers would have been even smaller if I had relied merely on backer updates to spread the word about the re-launch. However, when I noticed we weren’t getting a large return rate I began sending out messages directly to our previous backers letting them know about the re-launch, and about what we had changed, and how we had increased the value. I believe they appreciated this and I immediately saw a significant number of those backers pledge to the new campaign.

Lesson 3: Don’t be afraid to tell people you have failed once and are back with an updated project.

We decided early during our re-launch planning that we wanted to be upfront and honest about the fact that we didn’t meet our goal the first time. We also took that opportunity to share with potential backers how we had changed and how we had made the project better. People appreciate honesty. They don’t mind if your project didn’t meet its goal the first time, but they do want to know that you learned from that experience and have implemented changes.

The backers that have come back to our new project that were backers on the first one have expressed over and over their gratitude and thanks for the openness with which we ran the re-launch. New backers as well have mentioned that is one of the things that drew them to this project. 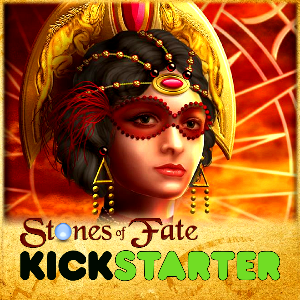 Mistake 1: Assuming previous marketing would carry over and work for this project.

I think we had a slow second and third day with this project because I failed to get the message of the re-launch out to reviewers and news sources. During the first campaign I had sent out press releases to all our reviewers and a lot of news sources and they posted on their blogs/websites/podcasts about our launch.

This time, I just sent an email to them informing them of the re-launch and assuming they would do the same kind of news blitz for us since they liked the game the first time. This was a mistake. I should have been more professional and asked them to post about the re-launch. In the future I will make sure this is done ahead of time and that I am prepared for launching and assuming nothing.

Mistake 2: Not having a high-res version of the print-and-play (PnP) ready to go

One of the things we were emphasizing leading up to the launch was our free PnP for everyone, not just backers but everyone could download it and play it. One of the early comments we got was that some of the text on the PnP was difficult to read. While I don’t believe this caused a major issue (we have had 360 downloads of the PnP) I do think it is more professional to deliver the best product possible.

We are currently working on a new PnP that will be high res and will be delivered to everyone (regardless of backer status) free. We hope to deliver that soon. Until then you can download our current PnP here and the current rule book here.

I feel like we were able to have a very successful first day due to our engagement with potential backers before launch. We were posting the preview Kickstarter page on numerous facebook groups and seeking feedback on the campaign as well as the game itself. We were open and transparent about what our plans were and then stuck to those plans on launch day.

The more you can engage your backers, the more successful you will be. We even ran a contest with All Us Geeks which gave people a chance to win a deluxe copy of the game but also offered a way for people to leave feedback on our campaign page as well as our Kickstarter video on youtube. All of this pre-campaign activity allowed us to bring in 160 backers and >$6,000 in the first day. This may not seem like a lot till you compare it to the 274 backers and ~$11,000 the first Stones of Fate raised in the entire campaign!

Success 2: Adding value throughout the campaign

One thing I am glad we did was add backer designed cards to the game through social media stretch goals. This has kept the backers engaged in the campaign and added value even for those backers that did not participate in designing cards. Everyone gets to benefit from having new cards and new abilities added to the game. So far we have added 2 backer designed cards. We are currently going through the second phase of backer designs and will be adding 2 more cards. Our first stretch goal will add 4 additional cards and more will be added after that. 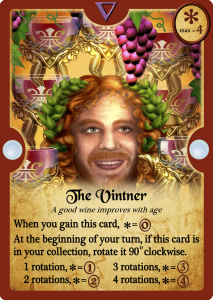 In the interest of adding value and because I am immensely thankful for all of Jamey’s excellent advice he has given while we prepared for the Stones of Fate re-launch, I would like to announce the addition of a new card to Stones of Fate.

All of our backers will now get The Vintner with their game!

This card, like a good wine, will improve with age. It will also give you an opportunity to gain additional points with the Opportunity Zone at the top. We hope you enjoy this addition to the game.

Thank You, Jamey, for giving me this opportunity to share what we have learned and to hopefully help out other project creators out there.

7 Comments on “Fate Won’t Decide the Success of Your Kickstarter Relaunch–You Will: Insights from Jeff Cornelius”