Fixing Mistakes Before You Make Them: Insights from the Meeple Source Kickstarter 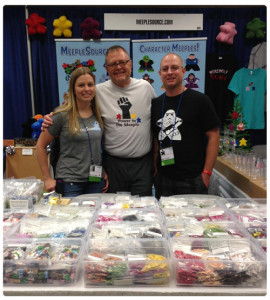 A few days ago I got a really nice e-mail from Cynthia at Meeple Source thanking me for the Kickstarter Lessons on this blog. Cynthia mentioned something that really stood out to me: She said that they discovered the KS Lessons just a few days before launching a Kicksarter campaign for character meeples, and after reading through all of them, they made some key changes to the campaign that–from their perspective–have made a big difference in propelling them to raise over $44,000 in just 1 week.

I asked Cynthia (and her partner, Chris), if they would mind sharing some of the mistakes they almost made so other Kickstarter creators could learn from them. Chris wrote a really nice, comprehensive reply to that query, and I’d like to share it with you below.

THE VIDEO.  I have a reputation of being a long-winded talker.  Your advise on the length and direction of good project videos was very helpful [Jamey: I recommend a 2-3 minute video].  We ended up using a really great production company that just happens to be run by a good friend, and that worked out perfectly.  Most of all, I think it was definitely the right decision to not include details like reward levels and stretch goals in the video, which we probably would have done otherwise.  Short, sweet, and to the point.

THE $1 PLEDGE LEVEL.  I had mixed feelings on this going into it all.  I was skeptical that anyone would want to pay anything for nothing. But your point that it allows a fence-sitter to stay connected to the project is so true.  We have had many backers come in at the $1 level, just to bump up to another pledge level after a couple of days.  It would have been a mistake to force them to a higher level, or nothing at all. [Jamey: I discuss the $1 reward level here, and guest blogger Morten mentions the importance of it in detail here.]

CONNECTING WITH BLOGGERS.  Podcasters, bloggers, and game reviewers were critical in getting the project off to a running start on Day 1.  [Jamey: There are a number of Kickstarter Lessons that address this, including here, here, and here.]

THANKING BACKERS INDIVIDUALLY. As we near one week from Kickstarter launch, we have nearly 800 backers, all of whom we have thanked personally for backing, and made the request to share our project with the ONE friend that would REALLY love what we are doing.  With only one exception (long story, ha!) the backers have appreciated this gesture, and many seem to be doing it (sharing).  The time investment is definitely worth the connection that we are making with each of our backers. [Jamey: I love the personal thank you, and I also like the focused request of asking each backer to share the project with 1 specific person instead of the generic “Share it with all your friends!” request. However, I would be wary of asking someone to do something immediately after they just made a pledge.]

MONEY BACK GUARANTEE.  We would have never thought of this for the Kickstarter, but we we essentially already do this with our regular customer on MeepleSource.com, with very few cases where it is even utilized.  I think that the peace of mind that it gives to backers who don’t already have a relationship with us, is way worth the very small risk of returns.

STRETCH GOALS.  We were about to make several mistakes with regard to stretch goals.  We were originally planning to set up most of our pledge levels to include a fixed number of character meeples (each in 8-piece sets, as that is the most popular configuration we sell).  Then we were going to have a few other, more expensive pledge levels, that included a specified number of meeples for EVERY character design that we released, including an unlimited number of stretch goal characters that get “unlocked” as stretch goals are met.

Thanks for sharing these insights, Chris and Cynthia! If you’re curious about how the final version of the Meeple Source Kickstarter campaign looks, you can check it out here.

5 Comments on “Fixing Mistakes Before You Make Them: Insights from the Meeple Source Kickstarter”