Fulfillrite: A Thorough (and Positive) Testimonial of a Shipping Service

If you’ve looked to my blog for various options for fulfilling a crowdfunding campaign, you’ve probably started with this page before making your way over to the Google Doc to compare prices and services. It’s there that you’ll see that I’ve personally used only some of the services on that document–I can’t vouch for the others. 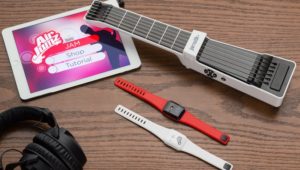 Matt currently has a project called AirJamz on Kickstarter. His previous project is the one I interviewed him about, as it’s the one he shipped via Fulfillrite. That project was called Jamstik, which attracted 2,991 backers and raised $813,803. My questions and Matt’s answers are below.

1.      In total, how many individual rewards did you need to fulfill? Among them, how many different SKUs were there?

We had almost 3,000 backers, and barring a few drop outs and about 50 non-physical rewards, that’s a good estimate of how many shipments we had to make. We had about 12 SKU’s as we had 3 color options, whether you wanted a case or not, and if you received a special wood-onlay or not. In the end we just shipped everyone a wood-onlay because it simplified our SKU’s down to 6.

2.      I see that about half of your backers were from the US, and the others were from around the world. On the Jamstik project page, it looks like you offered free worldwide shipping, but I might be mistaken there. In broad strokes, what were your shipping fees, and would you structure them differently if you could go back in time?

We actually did charge $50 for international shipments, $30 for Canada and $15 for US, with a few special considerations [Jamey: I swear I looked all over the project page and couldn’t find this! :) ]. I think our shipping fees were pretty fair, and we didn’t have too many issues with backers being turned off by the costs. As long as you can deliver your rewards on time and have done your research on actual costs (yes, go to shippers websites and enter a sample package, address and shipment type.) backers will feel like they get what they paid for.

3.      Did you work exclusively with Fulfillrite for reward fulfillment, or did other fulfillment centers provide their services as well? What made you choose Fulfillrite?

We worked exclusively with Fulfillrite, and it should be noted that we continue to use them for our direct sales fulfillment. My initial interest was piqued when I saw that they offered special rates for Kickstarter or Indiegogo projects. When comparing to other options and considering our own costs for shipment as well as employee time spent, I knew we had to outsource the operation. Fulfillrite also had integration for the e-commerce solution we were already set up with, so I knew the transition to direct sales would be smooth.

4.      What can you tell me about Fulfillrite’s rates? Did they work well for Jamstik’s budget?

The rates were very fair, especially for the crowdfunding campaign. The savings of working with a high volume shipper like them more than covers the cost of shipping material and the occasional pick & pack / marketing insert.

5.      How flexible was Fulfillrite? Were they able to handle orders of various sizes and composition?

They have been pretty flexible. At first, we made it easier for them by boxing up our own SKU’s at the factory to avoid pick & pack costs, but next time around I plan to save time and packaging by just shipping in bulk and having them put together any custom orders. We also shipped our own small items such as extra batteries and strings from the office, but have since moved to having them fulfill pretty much everything but special cases.

6.      Was Fulfillrite easy of use? Did you have to learn a complicated new system, or did they work with the spreadsheet you sent them? Was it easy for you to check on the status of individual orders, their tracking numbers, and inventory quantities?

They’ve got a pretty robust online system and we’ve found it very easy to work with. From adding a new SKU, to managing inventory numbers, it’s easy to understand for someone familiar with operations. For instance, If I need to send a backer an extra accessory I can look them up by previous shipment, create a new order with one click, add the item and pick shipping method and it’s on the way. Tracking info usually shows up as a clickable link the same afternoon if I’ve shipped it in the morning, and by the next day if it’s after 5 or an international order.

7.      Did Fulfillrite communicate well? Were they responsive, transparent, and proactive? Did they automatically send tracking confirmation e-mails to your backers?

Fulfillrite has been great about this from the start. They’ve been really nice to talk with and even made it a point to stop by our tradeshow booth at CES this past January to meet in person. Confirmation emails are included automatically and you can edit the text, but they aren’t heavily customizable.

8.      What can you tell me about Fulfillrite’s speed? How long did it take for them to process the freight shipment and send rewards to backers?

If you are a startup, let’s just say they are quicker than your team could possibly be if you had everyone involved in shipping, ha. They can pretty much turn around any freight shipment in 1-2 business days. The bottleneck was really on our end producing enough units.

9.      How was the quality of Fulfillrite’s packaging? How many rewards arrived damaged?

They use good quality packaging and are responsive to requests to make adjustments in any way. We’ve really only ever had one issue which was when they were out of the jamstik+ & case SKU, so we had them combine individual SKU’s which we had in stock. They taped 2 individual boxes together and we had a few reports of backers receiving only one box. They remedied this quickly by placing them in an outer box and we got through that situation pretty smoothly.

10.   What’s your opinion of Fulfillrite’s customer service? Did they solve any problems you didn’t anticipate? How did they respond when customers received the wrong items or had their packages sent to the wrong address?

We had an issue with international shipments where using a certain shipper proved really slow and it seemed like a group of about 70 jamstik+’s were just hanging out in a warehouse in Germany for a number of weeks. Backers were starting to get worried when they didn’t see any tracking updates. Fulfillrite helped us find out what was going on and organized the release of these products with some customs verifications.

We changed up a few things about our international shipments after this, including switching shipping providers, and it was as easy to do as changing a setting in their dashboard. Not to mention, we were able to provide second units to some of the backers who had been waiting too long by simply duplicating the order and having them ship back the 2nd unit when it arrived.

11.   After backer fulfillment was over, did you continue to use Fulfillrite to fulfill individual orders? Was it easy to submit those orders to them?

Yes, as mentioned we still use them for our direct online sales fulfillment, and it’s actually all automated through our e-commerce system.

12.   Would you work with Fulfillrite again? Why or why not?

Yes for sure, and we’re actually using them again for our current Kickstarter campaign. Even though we’ve been working with them at retail ever since our Kickstarter last year, they were willing to offer us the crowdfunding rate for our next project which was awesome of them!

Honestly I’d have them keep doing what they’re doing. Since they’ve now got a lot of crowdfunding products under their belts, I’d encourage them to keep new customers educated on the possibilities of fulfillment. For us, we knew pretty well what we wanted and they can provide it, but not everyone knows what to ask for and how to best organize the process.

If you are a creator who has used a fulfillment service I haven’t talked about or used, feel free to contact me for a similar interview. The more information we can provide to other creators, the more informed choices they can make.

17 Comments on “Fulfillrite: A Thorough (and Positive) Testimonial of a Shipping Service”