Funding Quests: A New Twist on the Stretch Goal System

When I launched the Scythe Kickstarter campaign 2.5 years ago, I had a few concerns about stretch goals:

The method I tried using was that every day I would reveal a new stretch goal, and threshold would be based on the funding level at the time I announced the goal. Backers didn’t respond well to this method, so on Day 3 I converted to a traditional stretch goal system.

I regularly revisit the topic of stretch goals on this blog–including a post a few months ago–but I’ve never been able to figure out a functional iteration of this “daily goal” system. Fortunately, I believe that another creator has cracked the code.

Gavan Brown of Roxley Games recently launched a Kickstarter campaign for Dice Throne Season 2. It uses a system he calls “funding quests,” and I think it addresses all of the concerns I mentioned above (and more).

The basic idea behind the funding quests is that Gavan reveals a new goal every day even if the previous quest is incomplete. This gives him an opportunity to spotlight each goal while always giving backers a sense of progression (the status bar under each incomplete goal helps with the progression). He also hints at the focus of upcoming quests. 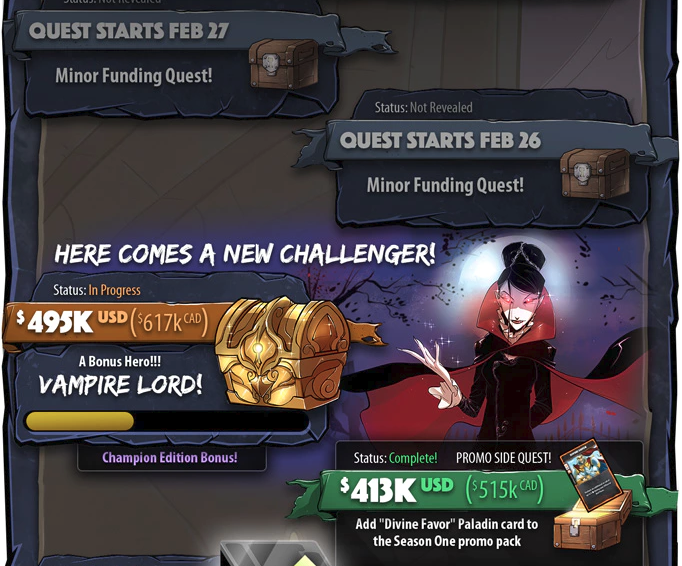 This alone doesn’t solve the Day 1 problem. I talked to Gavan, and he indicated a preference for revealing new quests every few hours that day (instead of 1 per day for the rest of the campaign). Gavan also said that he likes to balance the goals between major and minor quests, even if the funding thresholds are out of order. That allows him to have consistent reveals while teaching backers that some elements cost a lot more to add than others: 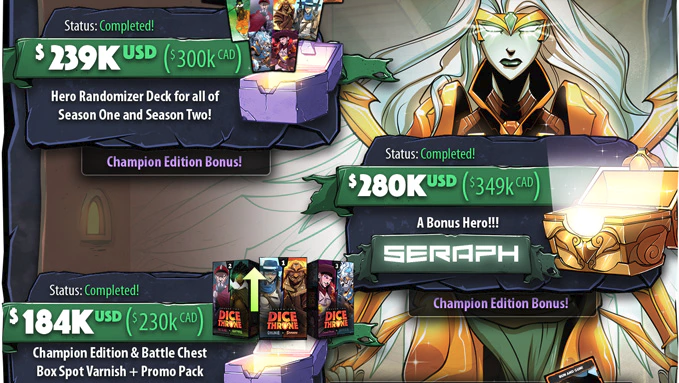 Here’s how Gavan determines the quests and thresholds:

It’s hard to pinpoint if this method has led to the campaign’s success, as there are many factors in play, but it would appear from the daily funding average ($24k/day on the “middle” days 3-13) and the daily comments average (182/day on the middle days) that funding quests are sustaining the excitement and engagement during a time when many campaigns flounder.

Overall, I love this concept, and I actually think it meshes well with the Root Method I discussed a few months ago.

What do you think about the concept of “funding quests”? Have you seen any other projects do something like this?

16 Comments on “Funding Quests: A New Twist on the Stretch Goal System”