One of the perks about becoming a game designer is that you get to meet other game designers. I haven’t actually met the creators of Story Realms, another game that’s on Kickstarter right now, but we’ve corresponded a bit during our overlapping Kickstarter campaigns, and we decided to do dual entries about our games. You’ll find my interview here, and I hope you enjoy their interview below. 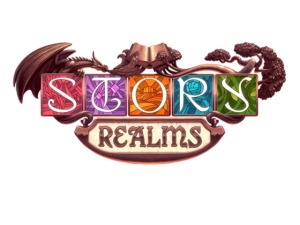 1. Tell us about your game.

Our game is called Story Realms. It’s a cooperative storytelling game adventure game that plays in about an hour. One player takes on the role of Storyteller and runs the adventure. The other players play as a heroic version of themselves magically transported to a storybook world and destined to save the day. Each new adventure is a unique experience with a new story to tell and new challenges for the player to overcome. The players will face a giant in the Thunderdrum Forest, fix the observatory in the steamworks city of Venture, save the Rainbow Prism from an army of the Dark, search for a way through the labyrinthine Quizzleplex. The adventures have anchor points that keep the story moving along, but the players have a lot of freedom about how the story unfolds in each scene. The game is story focused, but still uses dice rolls and simple game mechanics to help determine the outcome of the player’s choices.

2. What was the inspiration for the game? Why did you choose to make this game?

The game got its start over a year ago at a superhero party for Angie’s daughter Katie. A superhero game that was supposed to be the fun main event turned out to be pretty frustrating and we started talking about what kind of game we wished existed to play with our families. From there, the idea just started to grow. We knew we wanted something that let people work together to become heroes. We wanted it share our love of stories and encourage people less familiar with storytelling games to give this kind of game a try. We wanted people to be able to jump in with little effort and leave with a great experience and a wonderful story to tell. It was also important to us that it be fun for the whole family. We didn’t want to make a game that a parent played to humor their kids. We wanted a game that would be exciting for adults and that kids could play too. It was a big challenge to strike that balance, but it was a challenge we were excited to take on.

3.  What about the game will really appeal to people? What kind of audience are you trying to reach?

With Story Realms, we are trying to make a game that’s fun for the whole family. We’ve playtested it with hardcore gamers, casual gamers, family members and children as young as 5 years old. Everyone has a fun time. My suspicion is that this game will initially appeal to people who already like storytelling and adventure games. Our hope is that it will help people introduce their friends, their family, and their children to these types of games. While the game was designed with fun, first a foremost, it was also designed with a little subversive education in mind. The world draws heavily from folklore, fairytales, and beloved classic literature. We are also writing a curriculum based on US national standards and hope to encourage some educators out there to give Story Realms a try for as a unit for their classes.

4. Is this your first game? Tell us about your design studio and your experience as a game designer.

We’ve been working together to design various games for nearly 10 years now. However, prior to Story Realms, this has remained as sort of a hobby. Story Realms is the first game we’ve felt strongly enough about to try and put out to the public and get published. For a lot of years, the design team was actually Julian, Angie and Angie’s husband Randy. We worked on ideas for expansion products for 3rd Edition D&D. We worked on strategy and resource management games. We spent a year working really hard on a space themed game that we never got quite a clear vision or solid mechanics for. Looking back, in each instance, we were really caught up in the theme and story of the game. With the space game, we spent about as much time writing up lore and history for the world of this board game as we did working on the mechanics and it was never really supposed to be a storytelling game. With Story Realms, I think we finally got clear that what we’ve been reaching for all these years is a game that delivers the play time and easy access of board games, but the engaging and imaginative experience of traditional storytelling games and RPGs. So while we’ve only been working on Story Realms for a little over a year, in some ways, we feel like it’s what we’ve been working towards with every one of our previous attempts at game design.

5. It seems like your Kickstarter project is going really well. Now that you’ve made your funding goal, what are some of the stretch goals you are hoping to make? What would you like to do if you over fund by a lot?

We are very excited about how the project is going. We’ve hit our funding and have unlocked several of our stretch goals. The more support we can gather, the more fantastic we can make the game. Basically, our hope with overfunding is to just be able to provide more of everything. We want more artifacts and powers for the players, more Lore Cards and Storyteller tools for telling your own story and more pre-made adventures to play through. At higher levels we plan on providing an entire deck of cards that gives more information about the landmarks of the world and some cool new types of powers. At our highest currently planned level, we’d like to turn all of the books into hardback. Mostly what this extra money goes towards is increasing our art budget. Story Realms is an incredibly art heavy game. Everything in the game has art. Every power, every artifact, every major character, every scene of the adventures, everything. We’ve been very blessed to work with a phenomenal team of artists, but art takes time and that time has expenses. To add all of the cool extra stories, tools, and fun cards into the box that we really want to put in there, we need to raise a lot more to cover the art and additional design time. The exciting thing also is that some of our backer levels grant the backer the ability to collaborate with us to put their own designs and ideas into the game. At present, we haven’t had anyone pledge at those levels, but we’re still very hopeful. We would love the chance to work with an excited fan to help bring their creative ideas to life as a piece of the Story Realms game.

Congrats to Story Realms on their success! If you’d like to see my answers to the same questions, click here.