There are some updates to the first edition of Viticulture that will become standard in the second edition. These updates can be seen along with an overall summary of the game on this one-page printout created by supporter Nersi Nikakhtar. The most current version of the game is the Essential Edition–it is bigger and better in every way than the second edition, for the same price.

It may be placed on an already full action to perform that action. For example, if you are playing a 2-player game and the other player chooses to give a tour with regular worker to gain 2 lira. If you really needed to give a tour, you may then place the grande worker on that action (on the art for that action, not an action space) to gain 2 lira as well. Multiple players may place their grande workers in this way. Otherwise you may place your grande worker on any action as you would place a regular worker there. 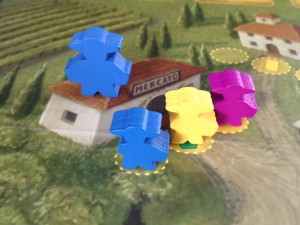 Viticulture is a very tight game–that was our intention when we designed it. It adds plenty of tension to the game. The problem is, there are times when that tension crosses the line into frustration when a player was really counting on getting a certain action but they couldn’t get it due to something out of their control (like turn order). The result is that selecting one of the first slots on the wake-up track becomes much less of a choice and more of a necessity.

Also, the end of the game can be quite anticlimactic. Once the wine order and winter visitor action spaces are full, there are no other ways to get points (beyond lira for the tiebreaker), which makes for a deflating end to the game, especially if you’re one step away from getting another point or filling an order.

The addition of the grande worker and its new ability fixes all of those problems. The game is still very tight, but you have that one out if you really need it. And the final year of a game has many more meaningful actions.

What Should I Do If I Don’t Have Grande Worker Tokens?

You have a few options:

The “crush grapes” action will henceforth be knows as “make wine.” Specifically: Make up to 2 wine tokens. If you choose the middle action space bonus, you may make an additional wine token.

There are no restrictions to the type of wine you can make. You are only limited by your grapes and your cellar. Thus if you want to make one red wine and one champagne, if you have 1 white grape, 3 red grapes, a medium cellar, and a large cellar, you can make those 2 wine tokens.

What About Visitors Like the Crusher or Crush Expert?

These visitors are now a little less powerful than before, but that’s probably a good thing. They are still quite potent, especially if you need to make a lot of wine at once or if you can combo them with another winter visitor card.

We are changing three of the visitors cards that we determined (after much consideration), to be imbalanced to the point of unfun. This might be the toughest decision we made, because the cards aren’t all meant to be equally useful to all players at any time–that’s why they’re cards instead of face-up choices in the game. But these three stood out a little too much, so here are their revised versions (also available for download here):

We are also making minor edits to the following cards:

Also, the tour guides no longer count towards the tasting room (they give you money instead of saying “give a tour to gain X,” which was confusing for some players).

Replacements for these cards will be provided in the Tuscany expansion pack to those who have the original version of Viticulture, and only the revised versions will appear in the second edition of Viticulture.

This is a very minor change. Instead of the starting player being the oldest player or the player with the fewest points in the previous game, the starting player will be randomized at the beginning of the game by blindly selecting one rooster. The player of that rooster’s color will be the first to select his/her wake-up time.

In the original Viticulture, there was a rule that said you could not choose an action space just to block someone–rather, you must be able to use the space to its full capacity (including the bonus if applicable). However, this rule is pretty clunky to explain, so we feel it’s better left to the players themselves to decide if that’s the type of players they want to be. Thus players can now place workers anywhere within the current season (within the action space limits for the number of players in the game) to use the action even if they can’t or don’t want to use the bonus. You must use the action–it’s only the bonus that is optional.

What We Aren’t Changing

We’ve heard some feedback about end-game points, but with the changes to the grande worker and crushing grapes/making wine, if you have tons of excess money (beyond the amount for a tiebreaker) or excess wine, you’re not playing the game as optimally as you should. It’s important for us to make changes that work thematically, and there will be thematic ways to convert lira and excess wine to victory points in the expansion pack. We don’t think those changes are needed for the core game, though.