How Gloomhaven and Xia Encourage Modding and Fan-Generated Content

I’m not sure exactly what prompted this thought, but it struck me earlier this week, and I’ve been thinking about it ever since. While I’ve always been flattered to see fan-generated content for my games, I’ve put it more in the “that’s cool” category than “this is important for my business.”

But I’m starting to realize it fits into both categories. Fan mods extend the life of a game by keeping it a hot topic of conversation on forums and by helping it return to the table (or the computer) long after the release date.

Fans have created some pretty neat stuff for my games–including elements of a number of expansions I’ve published (Tuscany, Moor Visitors, The Wind Gambit, and The Rise of Fenris)–as well as some variants, downloadable modules, and all third-party accessories. But I feel like I’ve barely touched the tip of the iceberg in this realm.

So I turned to two creators who have excelled at enabling fan content: Isaac Childres (Gloomhaven) and Cody Miller (Xia). They came to mind instantly when I started brainstorming this article. I also reached out to Nersi Nikakhtar, who creates the quick-reference guides for my games, as he knows a lot about modding for tabletop and video games. Huge thanks to Isaac, Cody, and Nersi for replying quickly and in such depth!

Isaac: From the beginning of the design process, it was important to me to develop a system that would be easy to create content for. Partially that was to make it easier on myself, but it was also to encourage other players to do so as well. Gloomhaven has great mechanics, but I don’t claim to be the best storyteller in the world. Nothing would make me happier than seeing a fan take the system and create new and beautiful content that I would have never dreamed of.

I wanted to make that process as easy as possible for my fans. For that reason, I provided guidelines for creating balanced scenarios during the initial Kickstarter campaign, and even ran a competition to see who could come up with the coolest scenarios, the winners of which were included in the game. Once the game was released, I also provided all the files necessary to create any new content that players could think of, including templates for new characters, monsters, items, etc.

Cody: One of the core pillars of design in Xia was this idea of sandbox style gameplay – this idea that you could have many different “toys” in the sandbox, allowing for unforeseen situations and for unique narratives to be told each time you play. One thing that acted as the catalyst in playtesting was that playtesters wouldn’t just comment on the content in front of them – they would consistently add-on their own ideas “What if you had…” “It would be so cool if…” And even now when I introduce people to the game, it seems to naturally spur their creativity. With that in mind, I really just wanted to try and give a place for those creative ideas.

To that end I gathered up all the digital files I used to create Xia, and released them as a sort of toolset for fans to create their own mods (to steal a video game term). This toolset includes 3d models (so fans can 3d print the miniatures) card and tile templates – complete with GUI elements. This allows fans to create printable files that are as close to the originals as possible. However for some elements, specifically the large “sector” tiles–it was next to impossible for fans to re-create them exactly. For those tiles I’ve partnered with BGG to release “Dev Kits” which are basically a set of blank tiles that are designed specifically for fans to print/paste their own creations onto.

I also try to be active in the modding community on BGG (I had originally setup a forum on my own website for this purpose, but that turned out to be a bad idea, BGG is a much better home for this sort of thing in my experience). So I comment and follow and try to encourage designers on BGG! 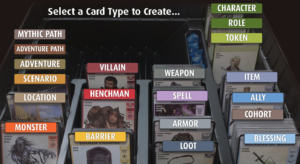 Nersi: Nersi mentioned how some games are built for the specific purpose of enabling fan content, like Minecraft. Map-driven games like Steam, Power Grid, and Ticket to Ride are great for fan implementations, as they can create their own map. There are also card-driven games like Netrunner and Magic: The Gathering.

Jamey: The challenge with cards (Nersi’s example) is it’s very difficult to match the exact cardstock for those games, so you can’t shuffle the cards together. Paizo has found a solution for their game, Pathfinder Adventure Card Game, by ensuring that DriveThruCards not only has a template for their cards, but also the exact same cardstock as in the core game.

I like that Cody mentioned the benefits of letting the modding community thrive on BoardGameGeek instead of on a separate website. While I’ve seen some companies have a thriving community separate from BGG (like the forums at Greater Than Games), BGG is such a great hub for those conversations.

From my limited experience, I’ve also seen the importance of encouraging fans to post their ideas and creations publicly. I’ve received 2 e-mails just in the last 2 days from Scythe and Viticulture fans who have some fun ideas, but those ideas can only thrive if they’re seen by the community.

Have you drawn any lines/boundaries, either actively (specifically telling fans what they can and cannot do) or passively (not providing certain types of digital files)?

Isaac: Nothing is off-limits, which I’m comfortable with partially because the game is so large, it would be virtually impossible to take the files and pirate the game in a way that would be cheaper than just buying from me. If I made a game that was, say, 10 cards, I might be a little more hesitant to provide all the files necessary to reconstruct it.

The one line I do draw is that anything created using the files should be provided freely to the community. In some cases, however, where someone has made a physical product that can’t be provided for free but is still a great contribution to the community, like, for instance, the removable stickers, I’ve been very open to creating a licensing contract with them so they can sell the product.

Cody: Yes, I’ve tried to be very intentional with how the content is released. The most important thing for me has been using the Creative Commons licensing this allows me to do two things: first to provide a clarity of relationship for fans with the content–they can create and distribute as much as they like, as long as they don’t sell it, and second it gives some legal protection in case someone were to breach the license agreement.

Jamey: I’ve been a little more restrictive with my boundaries. I offer some art and icons on the art gallery pages for each game on our website, but that’s pretty much it. I think perhaps I’ve been a little too protective of those graphical elements, as I know how much we spent to make them! I like that both Isaac and Cody are very clear about fan-created content being made available to the community for free.

How have the results impacted the success of your games?

Isaac: The impact this openness has had so far mainly resulted in a lot of great phone apps to help players keep track of some of the more fiddly parts of the game. These apps weren’t something that I foresaw, but I think they are great and make the game more accessible to new players. There has also been a lot of interesting fan-created content, including the scenario Jamey designed himself, but I think that over the years, we will see a lot more new and interesting content coming out of the fan community and I am excited about that as well. More content keeps the game from getting stale, which is always a good thing.

Cody: It’s really hard to quantify statistically but the modding community has been active on BGG and kept the forums alive with posts, which I think really has made Xia have a very long tail. In our recent Kickstarter for a reprinting of Xia, many backers were excited at the wealth of extra content the community has created, which has definitely had a positive impact on Xia’s success!

Jamey: So far I think the main quantifiable impact has been in regards to the fan content that we’ve ended up officially publishing in the form of expansions. One of these (the map in Tuscany) came from a contest; Moor Visitors came from the brilliant mind of Uwe Rosenberg, and both The Wind Gambit and The Rise of Fenris came from me seeing Scythe fans post the rules and early playtest results of expansion ideas on Facebook and BoardGameGeek. I’ve reached a point in Scythe in particular where I don’t plan on publishing more content, so fan mods are where the game will (or won’t) thrive into the future.

Were you inspired by any other games by designers who encouraged fan creation?

Isaac: Descent 1st Edition, which has a huge fan community making truly amazing content way outside the scope of the actual game, seemed really cool to me.

Cody: Yes of course! Coming into the design of Xia, most of my inspiration and background is in PC gaming. I love the modding communities around PC games like Skyrim, Half-Life, Warcraft III, etc. I remember spending hours online searching through fan-created content, adding it to my game and trying out wacky, off-the-wall ideas that the publishers would never allow in a “polished’ release. I think the modding space is such a great place to have fun, flex your creative muscles, and do what games do best: allow us to play.

Nersi: Nersi mentioned some other great examples: TIME Stories, Robinson Crusoe, Shadows of Brimstone, and Mansions of Madness are all scenario-based, just like Gloomhaven, which makes them ripe for fan-created scenarios. He also listed games where the universe is so vast and rich–like Mass Effect and Star Wars–that there’s plenty of room to create more stuff (characters, ships, planets, etc).

It’s been incredibly insightful for me to hear from these great minds–thank you, Isaac, Cody, and Nersi! I’d love to hear your thoughts as well. Have you ever created or used a fan mod? What have you seen that works or doesn’t work?