How to Design and Publish an “Evergreen” Board Game

The evergreen board game is the grail of every designer and publisher. It’s a game that is so well received–not just in terms of ratings, but in terms of actual sales–that it gets reprinted time after time, year after year.

Spoiler alert: I haven’t figured out the magical formula for an evergreen game yet. It’s remotely possible that Viticulture (17,500 copies in print), Euphoria (20,000 copies in print), Tuscany (10,000 in print), and Between Two Cities (15,000 copies) might continue to sell on a regular basis–I certainly hope so. (Those numbers are current as of November 2015).

But the truth is that most board games don’t get to put the “over 3 million copies sold!” words on the front of the box like Ticket to Ride. In fact, many games struggle to sell through even a minimum print run of 1500 units.

So there is no magical formula, but we do have some data to consider. I recently saw a post on the Black Diamond Games blog (a popular brick-and-mortar retailer in California) about their top-selling games, and I decided to use that as the foundation for an evergreen metric.

The factors I plugged into the metric were:

To appear on the list, a game had to be present on at least two of those lists.

Obviously this metric is far from perfect. It heavily skews towards US gamers, and it excludes mass-market bestselling games like Monopoly and Sorry. It also doesn’t include Magic: The Gathering or games that I know have sold very well in the last few years like Zombicide and Boss Monster (they simply weren’t on those lists). I’d love to add more data to this metric, but I found it difficult to find actual sales ranks and numbers. Feel free to mention other resources in the comments.

That said, the evergreen board game metric can be found here. I’ve also pasted a screenshot below (there’s more data on the metric, like BGG rank, year published, cost, etc). 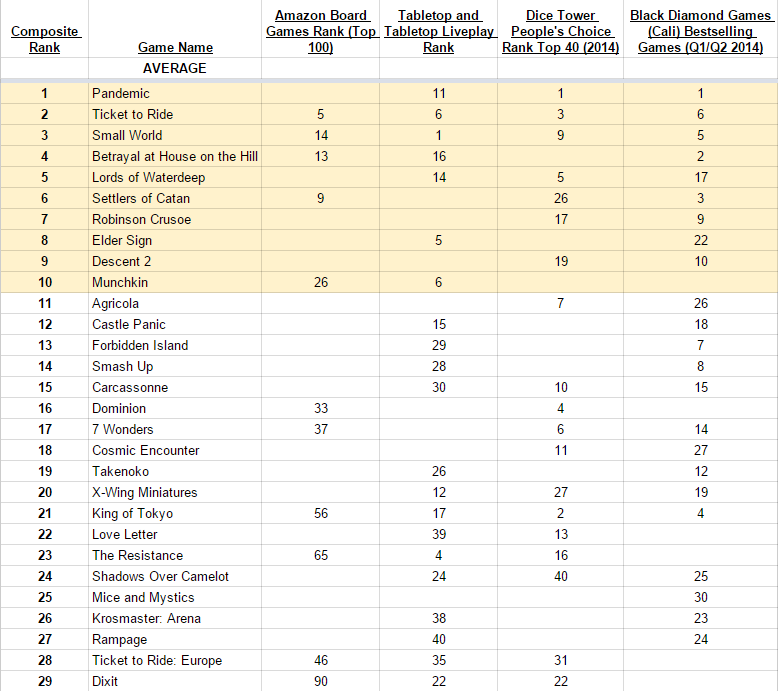 One of the most important takeaways from this data is that there isn’t a particularly tight correlation between BGG rank and evergreen status. Granted, an average of 161 out of over 10,000 games on the BGG database is still quite high, and there’s no reason you would want to design or publish a game that doesn’t rank high on the list. But it does mean that designing a game in the hopes of getting a top-20 BGG rating is a different goal than designing an evergreen game. In fact, there are only three top-20 BGG games on this list (Agricola, Robinson Crusoe, and 7 Wonders). Most of the top 20 are complex, lengthy, expensive games–attributes that don’t align with most evergreen games.

This doesn’t tell us much other than that the “cult of the new” doesn’t necessarily translate into long-term sales. This makes sense; this is an evergreen metric, not a measurement of the current hottest games. I think the takeaway here is that reaching evergreen status takes time, persistence, and good marketing. The games on this list have maintained their popularity because people continue to play them on a regular basis, something you as a publisher can impact by releasing expansions, promotions, and other ways to engage a growing fanbase.

It’s really important to note here that there isn’t a single 2-player-only game on this list. Nor is there a 3-player max game here. Evergreen games seem to be those that engage a number of people, ideally in the 4-6 range.

The maximum game length (according to BGG) clocks in at just under an hour. Granted, there were a few longer games on the list, but we’re talking averages here. I think the optimal range here is pretty broad, perhaps between 30 and 90 minutes (including setup).

This cost isn’t the MSRP–it’s the listed price on BGG or Miniature Market. Thus the average MSRP is around $45. This correlates with the data from our retailer survey last month–the sweet spot for games appears to be in the $30-$50 range for MSRP.

One piece of data hidden within the chart are all of the expansions associated with those games. Of course, a successful core game begs for an expansion, but I think the presence of expansions can help to reinforce the sales of a game to turn it into an evergreen game. (credit to Alex for pointing this out in the comments)

I think there’s a lot more that can be done with this data, so if you know of any other resources, please let me know. I’m also curious to hear your conclusions from the data–perhaps there are patterns you notice that I’m not seeing.