How to Generate $450k in Post-Kickstarter Retail Sales: An Interview with the Creators of Boss Monster

Almost exactly a year ago, a Kickstarter campaign with a funding goal of $12,000 ended up raising $215,056 from 4,689 backers. The game was Boss Monster, created and published by Chris and Johnny O’Neal, founders of Brotherwise Games.

Although I backed the campaign (partly out of curiosity to learn from what they were doing right and partly because it was so affordable–$20 for a game!), I didn’t really pay attention to it until two things happened a few weeks apart:

It was really after that second item that I decided to reach out to Chris and Johnny to see if they would share their insights with other Kickstarter creators. I’m grateful that they’ve taken the time to answer my questions below. It’s actually great timing to post the interview this week because I just wrote about post-Kickstarter sale strategies on Sunday. 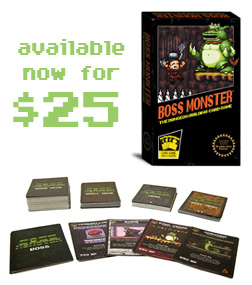 Even with the Kickstarter success of Boss Monster, we still felt a fair bit of nervousness about whether the game would be a hit in retail stores. We were therefore understandably conservative in our ordering and only had 3,000 units in our first print run that weren’t already committed to Kickstarter backers. This was both a blessing and a curse. On the downside, we sold out of units very quickly, and were left with a lot of fans who wanted access to the game but couldn’t get it. On the upside, we sold out of units very quickly, and that created even more buzz about the game. Since then we’ve gone back to print twice.

2.      For that first batch of games, what was your distribution strategy? How did you balance that with direct sales?

Our plan was always focused on succeeding in hobby stores first, treating sales on our website as a secondary bonus. We initially held back a few hundred units for direct sales, but when it became obvious how quickly the game was selling we halted sales on our online store and sent those units to our distributors. We’ve got a long-standing love of comic and game stores, and we felt like our first commitment needed to be to those brick-and-mortar stores.

There’s a cost to focusing on retail sales, since we make three times the profit on a direct sale. But every time we’re tempted to maximize our short-term gain, we decide to focus on long-term success instead. Independent game stores are the lifeblood of the hobby games industry, and we think their active involvement is crucial to making Boss Monster a game that will still be enjoyed a decade from now.

3.      Did you use conventions as a way to sell games and engage your audience? If so, what are a few key things you learned that could benefit other project creators?

Both of us have families and full-time day jobs, so our ability to get to get to conventions is (sadly) limited. We did put it in an appearance at Strategicon, here in L.A., in February of 2013.  We hadn’t registered as vendors, just grabbed a table and started hosting demo games. We also walked around a lot foisting sample cards on bemused gamers. It was fun, but probably not a huge part of our later retail success.

We’ve had better luck encouraging Boss Monster fans to demo the game at their local conventions, a practice we always try to reward by sending them some swag like T-shirts. We have seen bumps in our direct sales immediately after one of the fan-led events, so we know they’ve paid off for us.

And now that Boss Monster is pretty firmly established, we will be at Gen Con in 2014! That’s a big step for us, and if it goes well we will try to make appearances at some other shows.

4.      What factored into your decision to launch a second print run of Boss Monster, and how did you decide the number of games to print?

Before games even started to hit shelves, we were hearing feedback from players who received their Kickstarter copies and were loving the game. We knew that we’d been too conservative with the first run, and immediately authorized another 5,000 units — the highest of several numbers we were considering at the time. In retrospect, we were still being conservative, but we were operating without a lot of hard data. We’d seen examples of sales numbers like 10,000 and 15,000 touted as impressive for a hobby game, so we were convinced that sales could fall off a cliff at any time.

We’ll see where we can grow from here. Our third print run was 10,000 units, and the majority of those units were committed before the delivery arrived. We’re adding a fourth US distributor, and starting to send some units to folks in other countries who have been patiently waiting for us to have enough stock to share. 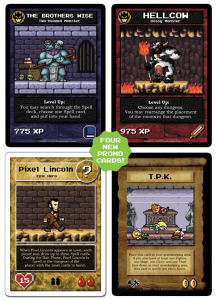 We take this super-seriously, and it pains us every time that someone comes to us asking if there’s a way to obtain the exclusives. It’s very easy to put ourselves in the shoes of people who missed the Kickstarter and want to get their hands on those cards, so it’s hard to say no. The fact is that when we came up with the idea for Kickstarter-exclusive cards, we never knew how big our post-Kickstarter community would become. We only say no (turning down tempting bribes on an almost daily basis) because we made a very public promise during the campaign to keep those cards truly exclusive. That’s a promise we have to keep.

Now that we’re a little older and wiser, you can bet we’ll be careful about exclusive cards in the future. The established best practice (which emerged or at least became apparent to us after our campaign ended) is to offer game content that’s aesthetically interesting but not mechanically unique. Alternate art cards, optional game accessories, and deluxe editions are a nice way to go. For example, we’ve designed a couple of cards for the Worldbuilders charity that have unique flavor but vanilla mechanics. We also think time-based exclusives are a good approach, such as giving players access to a mini-expansion months before it’s released to the wider public.

Making a game work at retail starts before you even launch your Kickstarter. Selling a product in a local game store means selling through distributors, which means you will be earning less than half of the sticker price on every sale. So if you have a game like Boss Monster that sells at $25, you’d better have a game that you can sell profitably for around $10. That means understanding your costs for production, shipping, warehousing, and delivery to the distributors — all before you decide what price you set on Kickstarter. If you’re not set up to give a retailer a 50% margin (at a competitive SRP), store owners don’t have a reason to support your game.

Another challenge is that distributors and retailers remain suspicious of Kickstarter projects that might look great on paper but then fumble after launch. Even after the success of our campaign, our initial orders from each distributor were 200-300 units. Only when they saw those units sell out within days did they come back for more. Retailers fear that big Kickstarter campaigns are shifting dollars, not creating new fans, and it’s up to all of us to convince them otherwise. 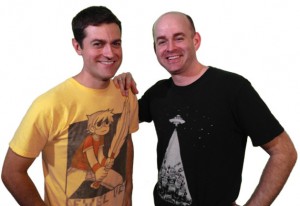 You also have to be willing to sell your game, which can be harder work than making the game. For many indie games, the zenith of your press coverage is going to be during your Kickstarter; you’ve got to try and capitalize on that. We first contacted Alliance, ACD and Southern Hobby when buzz was at its peak, and our outreach continued once the game was printed and on the way.

Even now, with Boss Monster’s success, we keep our distributors appraised of our marketing and advertising efforts so they know we’re doing everything we can to keep the game moving. We even reach out to individual retailers in an effort to make sure the distributors are hearing about Boss Monster from every angle.

7.      Last, in all this talk about retail games, I don’t want to lose sight of those who made our companies possible in the first place: our Kickstarter backers. What have you done to continue to appreciate and engage your original backers as your company continues to grow?

The Boss Monster player community has now more than doubled, but Kickstarter backers are still some of the most involved. Many have become playtesters, and have provided crucial feedback for our first expansion, Tools of Hero-Kind. We’ve now shifted our regular communication to our Facebook page, reserving backer update e-mails for only the biggest news. Based on a recent poll, we know a lot of our Facebook fans are original backers, and we love seeing familiar names there. We’ll continue to stay in contact with them, and when our second Kickstarter goes live, our backers will be the first to know!

If you have any questions or comments about this interview, I’d love to hear them below.

10 Comments on “How to Generate $450k in Post-Kickstarter Retail Sales: An Interview with the Creators of Boss Monster”