How to Make It About Them: The Viticulture Charity Auction

Sometimes you don’t realize you have a personal philosophy until it shows up at your front door wearing nothing but a trench coat.

But the minute I pressed that launch button, something changed. It had probably been changing for a while, but it didn’t fully hit me until I launched.

It was then that I realized that I was far more interested in making something for other people than for myself. I didn’t want Viticulture to be about me anymore–I wanted it to be about the people who discovered it through Kickstarter and became a part of the foundation of the game. It was about the bloggers and reviewers who took a chance on a complete unknown to offer their feedback, advice, and reviews. It was about being good and fair and responsive to people. It was about creating something that would bring people together for memorable, joyful, creative moments.

My personal philosophy, I realized, was to make it about them.

I’ve had complete clarity since I had that realization. It has been the source and the guiding compass of every decision I’ve made for Stonemaier Games–not just for our Kickstarter campaigns and our games, but this very blog that you’re reading. This isn’t blog isn’t about me. It’s about helping other Kickstarter creators and hopefully making Kickstarter a better place for backers. 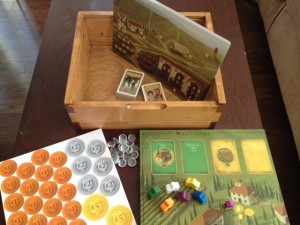 So it was with this philosophy in mind that I launched a charity auction for a limited edition wooden-box version of Viticulture this past weekend. You probably got a notification about it–if not, you should sign up for our monthly e-newsletter so you get notified in the future.

The basic gist of the auction (which you can find here) is that there are 13 wooden-box copies of Viticulture up for auction on Board Game Geek. They all contain the original game, the updated rules, and grande workers. Also, the winner of each game will receive their choice of a special perk, including items like Euphoria supreme, the Arboriculture expansion to Viticulture, and an early prototype of one of the expansion elements of Tuscany.

Each of the games is attributed to one of our favorite bloggers (it’s not a comprehensive list of bloggers, but we only had 13 games to work with), and each of the bloggers chose a charity. Half of the proceeds from each game will go to that charity, and the blogger whose game garners the highest winning bid will have the entire amount go to the charity. Currently bids are between $130 and $300 depending on the blogger.

There are three groups of people that we made the auction about:

It’s a rare win-win-win scenario, and I’ve been amazed by the outpouring of support in the first two days of the auction. We didn’t ask anything of the bloggers, but many of them have decided on their own to add to the charity pool or sweeten the pot with items of their own. It’s also a fun little competition between the bloggers.

Even if you’re not interested in Viticulture, I would recommend that you take a look at the auction to see how it works. Feel free to press the green thumb button next to your favorite blogger (if you have one), as the blogger with the most thumbs will get an advance copy of our next game for an early review. And maybe you’ll discover a new blogger or charity along the way.

My overall point is: I never would have thought of this if I didn’t have a guiding philosophy. Do you have a philosophy that guides you, that focuses you? I’d love to hear it if you don’t mind sharing in the comments.

6 Comments on “How to Make It About Them: The Viticulture Charity Auction”