I’m No Longer the Only Full-Time Employee at Stonemaier Games!

After running Stonemaier Games as my full-time job for the last 6 years, I will soon be joined by our first-ever full-time hire.

A few months ago, I realized a few things:

All of these factors accumulated to help me see that hiring someone amazing could make a positive impact on Stonemaier Games, myself, and the people around the world we seek to reach.

I’m a big believer in hiring people who have already made a positive impact on your organization (see article here). That’s how I hired Morten. So that narrowed the field quite a bit. Also, I knew that I needed someone in St. Louis, as certain aspects of the job are inherently tied to our warehouse and me being here. I couldn’t find anyone among our general job applicants who fit that description.

A few candidates quickly rose to the top of my list. Both were friends, which can be tricky, but I really needed someone that I can trust with full access to accounts and data. It was very difficult to choose between them, though I wasn’t alone in the process, and in the end we made a decision. (If there’s another company looking for a Director of Communications, though, feel free to contact me at jamey@stonemaiergames.com–I have a fantastic recommendation.)

Actually, before finalizing the decision–in the midst of it, really, though I was starting to lean towards one person–I went to New Zealand. While I was there, I asked that applicant if they could respond to emails and keep an eye on social media. Basically, I had an opportunity to test the waters before diving in, and the person responded to the challenge by making my life significantly easier. I think that’s an underrated quality, something you can’t really see unless you test those waters: Does the applicant make your professional life easier/better? 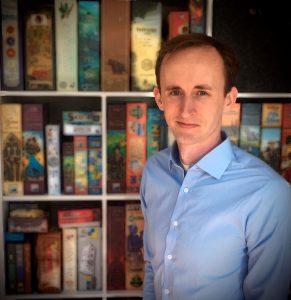 That person, Stonemaier Games’ new full-time Director of Communications, is Joe Aubrey. Here’s how Joe describes himself on his new staff page:

Joe Aubrey is the Director of Communications for Stonemaier. He handles a large portion of customer interactions, including US parts replacement and organizing parts replacement helpers around the world. If you ever want to ask Stonemaier a question, but don’t want to bother Jamey, send him an email! Additionally, Joe will be in the background of many different Stonemaier projects, providing leadership and support every step of the way.

Joe is an avid rock climber and loves spending time outdoors and traveling. Throughout his other hobbies, board games have been a steady presence. From watching his father play war games, to teenage memories of playing Dune, to relaxing evenings of Viticulture with his partner, board games have been a source of joy for Joe and he looks forward to facilitating that experience for others around the world.

I’m excited for Joe to officially join Stonemaier Games in January, and I’m sure many of you will see him on our social media and email accounts. I’ll still be as involved as ever, though–I love that I get to interact with you every day in so many different ways. Joe will simply accentuate and elevate our communication. Joe isn’t going to use any accounts that use my name or face, so if you get a response from Jamey, it really is Jamey.

I’d like to hear your thoughts on this process, and if you have any questions for me (or Joe), feel free to post them in the comments below.

31 Comments on “I’m No Longer the Only Full-Time Employee at Stonemaier Games!”