Inclusion, Diversity, and Representation in Board Games and Beyond (guest post by Elizabeth Hargrave) 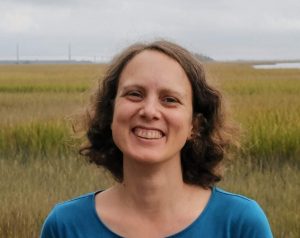 Wingspan designer Elizabeth Hargrave, with whom I’ve had the pleasure of working and learning from over the last 4 years, recently posted an incredibly insightful series of connected thoughts on Twitter. Today Elizabeth joins us to share a long-form version of those thoughts here on the Stonemaier Games blog. Thank you for compiling the following, Elizabeth!

A little while ago, board game designer Eric Lang tweeted a pretty straightforward statement about inequality. I noticed a pattern in the comments. Every time one of us says, in some way:

“IT IS HARD to be a woman/person of color (POC)/LGBT+ person in board games,”

there are people who chime in and say, in some way:

“THAT CAN’T BE TRUE! I have never seen a gamer/publisher actually be sexist/racist/homophobic.”

Let’s break this down.

First, just because you didn’t see it doesn’t mean it didn’t happen. When your friends tell you the ridiculous things that happen to them, you’re not like, “THAT CAN’T BE TRUE! I literally don’t believe you that one of your neighbors came over and swam naked in your pool.” You’re just amazed along with them, right?

So, believe other gamers when they say that overt, intentional acts of sexism, racism, and homophobia DO happen in gaming. Things that are so obviously bad you might find the courage to call them out if you witnessed them. Not everyone has seen something like this. If you ask around, though, you might hear some doozies.

For some people, this kind of really ugly statement/act is where their definition of sexism/racism/homophobia stops.

But friends, the truly egregious stuff isn’t even what I’m thinking of when I say IT IS HARD.

Likewise, I pretty frequently point out the overwhelming white male majority in board game design. This chart sums it up well: among the top 200 games on BGG as of 2018, 94% of the designers were white men. 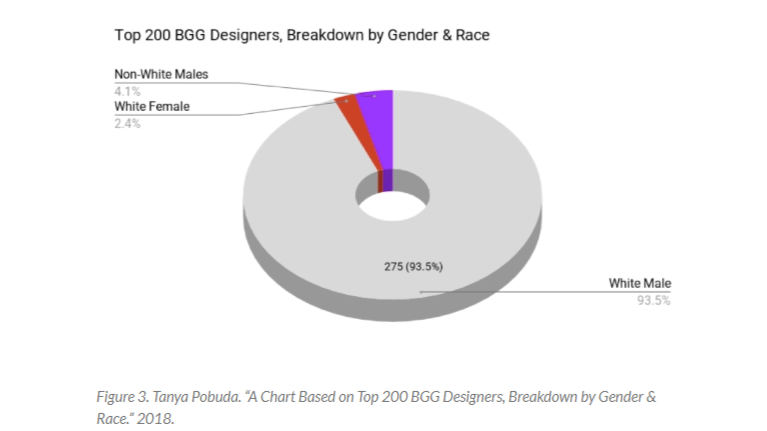 When I share this chart, there’s always someone who thinks I am saying “Publishers are turning down women and POC out of outright discrimination.”

Do some publishers do this? Maybe.

But, just as I don’t think there are horribly ugly, racist things being said every week at most game nights, I don’t think outright discrimination by publishers is the best explanation for the extreme lopsidedness of this chart.

So what do I mean when I say IT IS HARD?

What is the mental image that comes to mind if I ask you to think of a “typical boardgamer”?

The board game hobby is diversifying, but it’s got a long way to go. If you’ve been to a lot of public gaming events that are NOT mostly straight, cis white guys with lots of money to burn, you’re an outlier. I mean, look at this picture of Gen Con. 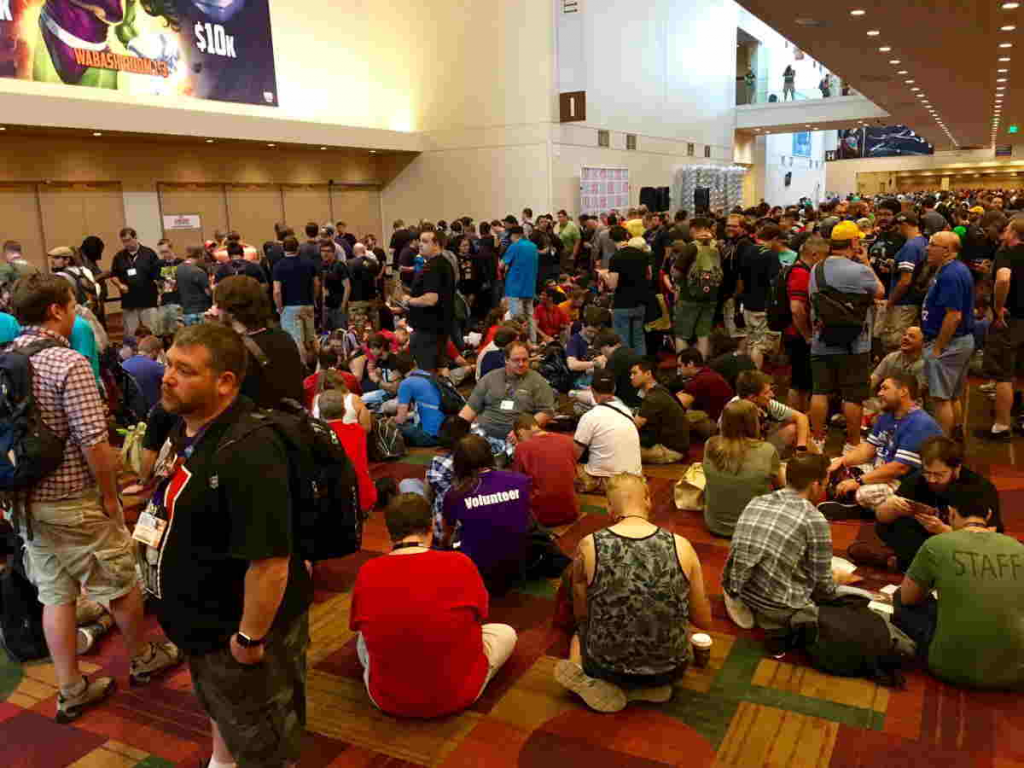 What happens when someone walks into a board game event and they don’t fit people’s image of a “typical boardgamer”?

It becomes clear that people assume we don’t belong.

None of that may be intentionally mean, but it all has an impact.

In these “cluelessly unwelcoming” spaces, some of us are unable to escape the feeling that there is a chance that “egregiously unacceptable” just hasn’t come out yet. For me, in most other situations, it’s really weird when there are NO women. So my brain wonders what’s coming. Did something happen here that made all the women leave and never come back?

Every time that I have written about this feeling, people have said, “Can’t you just push through? People mean well!”

Usually we can, and anyone you have met who is a gamer from a marginalized group absolutely HAS pushed through it. But it can be exhausting.

Just like a game group that isn’t explicitly mean but falls far short of welcoming, board games themselves can create the same feelings.

In the top 100 games on BGG as of 2018, when you count up all the figures in the cover art,  46% were clearly white males, 20% were animals or aliens, then everybody else makes up the last third. 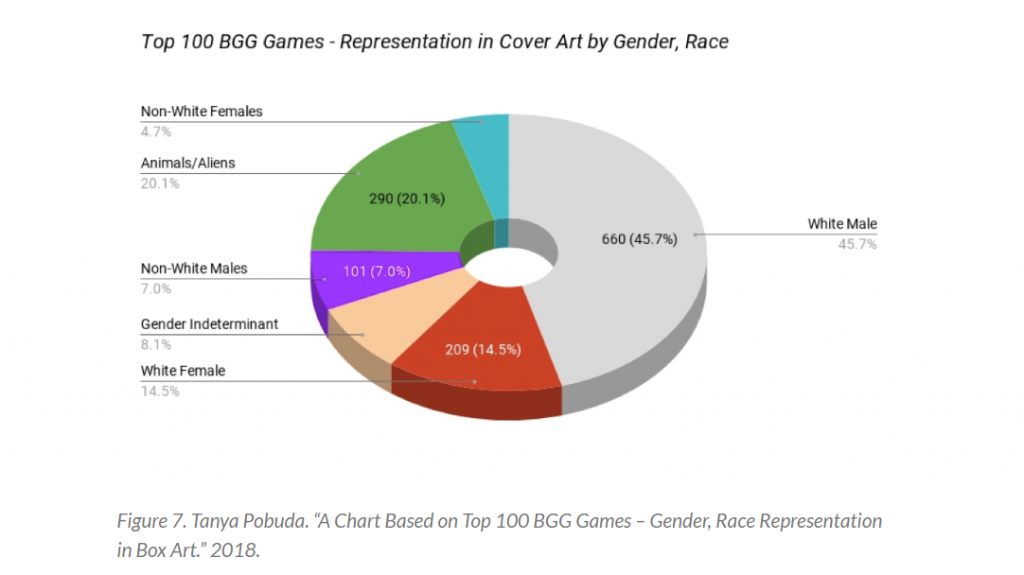 But the covers are just a representation of what’s inside:

For a lot of us, this lack of representation becomes another thing that says, “oh! we didn’t expect you to be here.” Each game’s shortfalls might be tiny and understandable, but it adds up to a big, exhausting, pattern.

And so we push through.

For many marginalized groups, role models do exist in board games. Not a ton, but maybe more than we think. Which is why I make lists on my website: I got tired of people saying I was one of the only female game designers, and ended up finding over 200. A few weeks ago, I made a similar list of black people in the boardgames industry.

No one who can name designers or reviewers or publishers would struggle to come up with the name of a white guy in those categories. Most board game media is full of them.

I originally made that first list of women designers to have something to direct podcasters and other media folks to, when they wanted to improve their coverage of women. But what I also realized is that it actually meant a lot to me to just see that many women in board games collected in one place. I unexpectedly choked up in an interview when I was talking about it the other day.

For every commenter on posts like this who says, “I don’t see the gender/race of board game designers,” I’ve probably heard from 10 women or parents who want to tell me how important Wingspan is to them, just for the names on the front of the box.

Something less talked about is how the rest of life intrudes to make becoming a gamer or a game designer easier for some people than others: White men, on average, have more leisure time, wealth, and income than other demographic groups, at least in the US. Gaming and game design are both expensive, time-consuming hobbies, and on average, the demographic groups that are already marginalized in this hobby are also more likely to be facing time and financial barriers.

Every day, the average US woman spends over an hour more than men on household chores and caregiving, and 40 min less on leisure activities. I know so many guys who leave mom with the kids while they go to game night. It makes me so frustrated, but it is very much in keeping with this pattern. 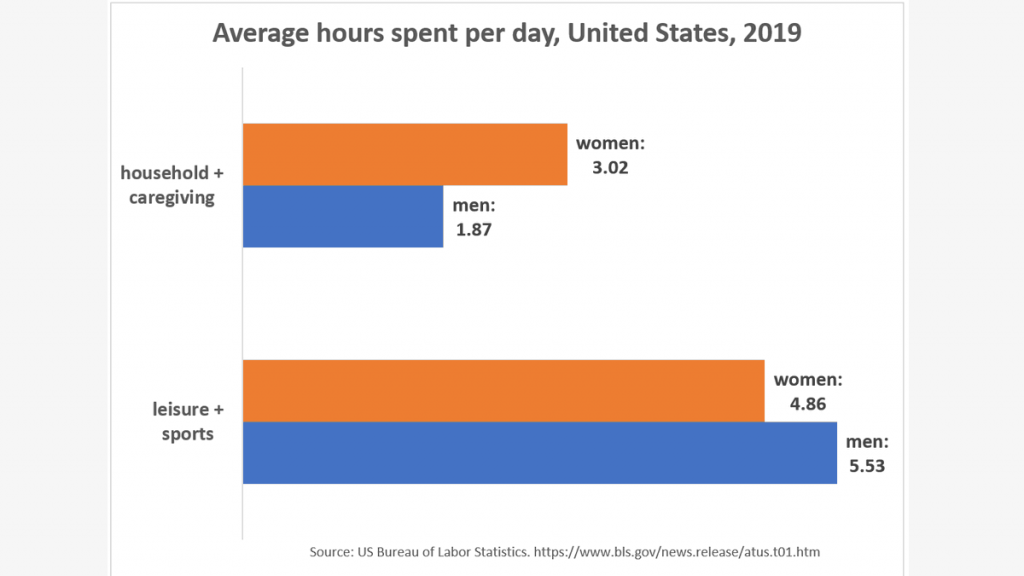 On average, white households have vastly higher incomes ($71K) than Black ($42K) and Hispanic families ($51K) and 8-10x more overall wealth. And in every racial group, women earn less than men. Those differences add up to a lot of games. Or, in designer terms, a lot trips to cons to pitch your games to publishers.

For sure, some white male gamers are poor, and some don’t dump their kids on their partners to game. It’s hard for them to get to conventions, too. But that doesn’t make the statistics go away.

And I believe those 3 things are inextricably linked.

I’ve read through this several times now, and every time I pick up something new. What’s your key takeaway from reading this?

If you gain value from the 100 articles Jamey publishes on this blog each year, please consider championing this content!

140 Comments on “Inclusion, Diversity, and Representation in Board Games and Beyond (guest post by Elizabeth Hargrave)”