Interview with the Most Prolific Game Backer on Kickstarter

During my Kickstarter campaign for Viticulture, I was able to individually thank each backer for their pledge within a few hours of receiving the pledge. I would click on their backer profile, read about where they were from and other projects they had backed, and then I’d write them a thank you message based on the information I learned about them.

I encountered a few backers who had pledged to quite a few projects, but one stood out because he had backed so many more projects than anyone else I encountered. At the time, Miles Matton had backed around 300 projects. That was a year ago (September ’12).

I interview lots of project creators on this blog, but it recently occurred to me that it might be helpful for other project creators to know what a backer thinks about Kickstarter. And not just any backer, but someone who has backed hundreds and hundreds of project. Miles came to mind instantly, and when I reached out to him, he graciously accepted my offer to interview him.

I’ve really been looking forward to posting this, and I hope you enjoy Miles’ insights. Also, just in case this occurs to anyone, do not use this as an excuse to spam Miles with requests to back your project. Miles is doing us project creators a favor by responding to these questions, so let’s show him the same respect in return.

1. The first project you ever backed was White Elephant: The Card game back in July of 2011. How did you discover Kickstarter?

I’m not entirely certain, but I think I first found out about it from the game review site dicehateme.com or maybe from the Alien Frontiers game. (More on that in question 3)

2. As of September ’13, you have backed 695 projects on Kickstarter. What makes you keep coming back for more? Do you think you’ll someday reach a maximum?

I keep finding out about more interesting projects, a lot of time from updates of the projects I backed before, or the new projects of people & companies I backed before. I don’t think I’ll ever hit a point that I don’t _want_ to back more, but you never know what may happen (work troubles, new expenses & such could always make it hard for me to back as much as I’d like; actually, a bit of that has already happened, a few months ago I moved closer to where I work but it’s much higher rent at my new place so I’ve been cutting back on what/how much I support).

3. A lot of the projects you’ve backed are games. Have you been able to play all of the games you backed? Of those that you’ve played, what are your 3 favorite Kickstarted games?

No, unfortunately my “eyes are larger than my stomach” when it comes to games. I’ve played less than half of the ones that I’ve gotten so far. 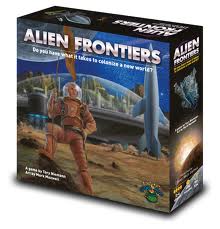 My favorite game is probably the one that got me going on board games in general, but I did not back it on kickstarter at first. I bought Alien Frontiers after it had been kickstarted & made available to the public (I think from amazon) and it had a sticker on it about “dicehateme.com game of the year” so I checked out that site and found out that the game had been made possible because of this kickstarter site (or it could have been from something I’d read about the game before that, when I was check it out, not entirely certain) and that backers there had gotten special cards for the game (luckily I’m not too bad of a completionist, didn’t have to go out & track down those “missing” cards for the game).

Anyhow, the other two of my most favorite are probably Sentinels of the Multiverse and Flash Point Fire Rescue, both ones that I’d actually missed the initial kickstarter for but have backed the expansions they’ve come out with at a level where I’d get the base game. And all three are ones I’ve played at my work’s company game nights (at least once each I believe), although I really like trying out new games so they haven’t been played too many times.

4. You’ve also backed projects in nearly every Kickstarter category. Do you look at Kickstarter every day for interesting projects, or do you have other ways of discovering non-game projects?

I sometimes like looking through the “Ending Soon” category (a couple of times I actually looked through as far as it goes, 7-8 days of projects I think it was) and that has lead to backing some things that I’d never go searching out for (the one music project that I’ve backed–Space Folk Album–comes to mind, and was quite likely one I found looking at that list).

But far more often I find out about a project by it being mentioned in another project’s update, which is likely to be for something of a similar project, but it’s not always (like the Maelorum / Darkraven Fantasy Soundscapes cross-promotion).

5. Given the number of projects you’ve followed, in your opinion what are the top things that every Kickstarter creator should do?

6. What are some of the things a Kickstarter creator can do to NOT get your pledge or get you to cancel?

For video games (which is a quite a few of those in my “Games” category) it would be to not have support for my OS (I use a linux distro called Gentoo, but if they have any sort of linux support I should be able to get a game to run on it). For board games, I only back if I think there’s something special about the game, whether that’s in the mechanics, theme, or components, there has to be some twist I haven’t seen done quite that way before.

7. Looking back over the last 2 years on Kickstarter, what are a few of the projects you enjoyed the most and why?

8. I don’t see many games on your list from big publishers using Kickstarter as a pre-order system. Is that accurate? If so, what is it about those projects that doesn’t compel you to back them?

I don’t have anything against those sorts of projects, just haven’t seen any that I wanted what they were offering.

9. Do you have anything else you’d like to say to creators or backers?

For backers: don’t back as many projects as I have, not unless you don’t mind skimming most of the updates or have a lot of free time (right now I’m over 9 days & 200 updates behind on mine).

Thanks so much for your time and insights, Miles!