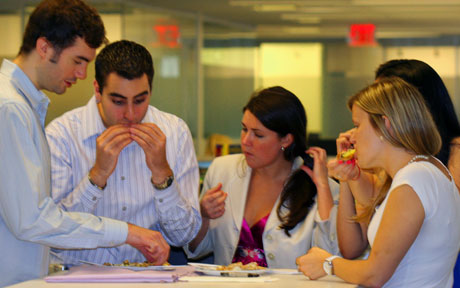 No matter what kind of Kickstarter project you have, there is a way to deliver a digital sample to potential backers. If you’re writing a book, post a sample chapter. If you’re making a board game, post a print-and-play (PnP) version of the game on Dropbox or Box.com. If you’re making a movie, post a sample scene or the script. I’ll explain why this is so important by addressing the two most common fears for posting a taste test for backers:

What if someone steals my idea?  I think this is something that all of us idea generators have feared at some point. And you’re more than idea generator if you’re on Kickstarter–you’re a creator. So you’ve spent all this time creating something, and if you put it out there for the world to download, why would they pay you for it when they can just print it out?

This is mostly a concern when you’re sharing the digital entirety of your project opposed to a sample chapter. The answer is this: It’s really expensive to print out one version of anything. Let’s take Viticulture, for example. When I got the final files from my graphic designer, I took it down to the local copier and had them make a copy for me to demo until I got the advance copies of the game. Total cost: $60. The retail cost of the game is $60, and trust me, it’s way nicer than the Kinkos version.

If that’s not enough to convince you, be assured by this: If you’re worried about someone infringing upon your intellectual property, the best thing you can possibly do is post it publicly. That way if you ever have to prove that you created it first, you have the post date to corroborate your claim.

What if people don’t like it?  This is a distinct possibility. Some people aren’t going to like your work. However, they are MUCH more likely to feel good about your project if you give them the chance to invest their time in it. If you share a sample of your work with potential backers and ask for feedback, you’re engaging them in your work. They’re becoming part of your project. Again, some may not like what they see, but now they have the opportunity to give you a few pointers. Even if you disagree with their feedback (which is fine–as a creator, you need to know when to implement feedback and when to decline it), connecting with them through their feedback could easily change them from ambivalent, potential backer to invested, enthusiastic backer.

What if it’s so unpolished that I’ll look bad? This was a big concern of mine during the Viticulture campaign. None of the art for the cards was finished, and the rules for the game were in Microsoft Word. First, as I noted in the lesson about art and design, the key is not having ALL of the art and design done when you launch your Kickstarter project. Rather, the key is to have a few finished pieces so you can demonstrate what the final project will look like.

The same applies to the sample you share. A small portion of it should look good. But Microsoft Word rules are fine. A sample chapter with a few typos is fine too. Backers know that you’re trying to raise money to create a final, polished project–they’d much rather see that you have a version of the rules written than none at all. Also, as with the previous point, their feedback about the unpolished sample might lead you in a direction that will save you some time in the long run.

Open Sample vs. Pay to View

For Viticulture, I offered a PnP version of the game to people who asked for it, as I wanted to know exactly who was testing the game so I could follow up with them for feedback. That seemed to go over well, and there was no backlash that it wasn’t publicly posted (rather, I posted that I would be happy to share the PnP upon request). That’s one method.

Another is to simply post a link to the sample file on your project page.

The last is a method I saw implemented by Guts of Glory: pay to view. For that project, a $5 pledge got you the print-and-play version of the game. This was a good idea, but as far as I’m aware, you couldn’t gain access to the PnP until the end of the project, which defeats the purpose of everything I’ve described above.

I think the better way to do it–and perhaps the best of all of these options–is to include the PnP with every pledge, effective as soon as the backer makes their pledge. You could explicitly mention it on the $1 pledge level, and have a note about it on the project page for the other pledge levels so their descriptions don’t get too lengthy. By making people pay something for the PnP, you know exactly who is sampling your work (so you can follow up for feedback) and you’ve gotten your foot in the door–you know exactly who you should follow up with later on to see if they’d like to increase their pledge to get the full version of the project.

What has been your experience with sampling Kickstarter projects? Have you seen any particularly clever (or off-putting) ways this has been done?

For more on this topic, watch this short video blog about PnPs.

Up Next: Kickstarter Lesson #11: Stretch Goals