If you’ve heard the phrase “minimum viable product” (MVP) or the term “pivot” over the last few years, they’re probably an indirect reference to a book called The Lean Startup by Eric Ries. The basic concept of the book is that if you want to start a business or launch a product, don’t spend years perfecting it before you introduce it to the public. Instead, create the cheapest, most basic form of it and share it with the world to see how people use it before “pivoting” (adjusting your strategy).

Now, I want to be clear that you should not take the MVP approach on Kickstarter. Don’t put an untested concept on Kickstarter. Your product and your project page should be as refined as possible before launching.

However, I think the MVP concept can teach us all about the things we want to start or make, yet we can’t seem to bring ourselves to actually get beyond the conceptualization stage and share it with other people. It could be starting a blog or a podcast, playtesting a prototype game, recording a song or video…the list goes on.

Lots of things (fear, rejection, laziness) hold us back from actually starting something, and we have to get over that. But the point I want to make today is that by sharing your product with the world in some form and allowing people to interact with it will significantly improve the product in the long run, which will hopefully set you up for a successful Kickstarter campaign. 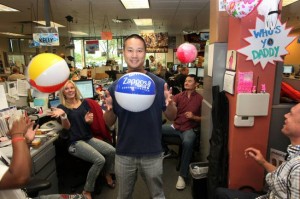 Here’s my favorite MVP story to serve as inspiration for you (I learned this by reading Delivering Happiness by Tony Hsieh: Have you heard of Zappos, the huge online shoe store? It was acquired by Amazon a few years ago for $1.2 billion, but they still continue to operate independently.

Given their size and success, you might thing that Zappos started with a boom–a beautiful, well-stocked, streamlined website, warehouses full of shoes, and a customer service department bustling with cheery employees.

In reality, Zappos was originally called shoesite.com. A guy named Nick Swinmurn had this “crazy” idea that shoes could be sold online, so he patched together a very basic website. But he needed shoes to sell, and he had no money.

Nick happened to live near a small shoe store. One day he went to the store and took photos of a bunch of shoes to post on his website. Whenever someone bought a pair of shoes, Nick would run over to the store, buy the shoes, and ship them to the person.

Now that’s what I call minimum viable product! By spending next to nothing and having no inventory, Nick was able to learn a ton about how people responded to the idea of buying shoes online. He was able to evolve the concept over time, and he soon attracted the attention of Tony Hsieh, who helped take the site to the next level.

So the next time you’re struggling to get an idea off the ground, think about how Zappos started. Let go of whatever is holding you back and create an MVP. Maybe it’ll fail miserably, but at least you’ll know right away that it isn’t going to work instead of imagining how it might work for weeks or months. What will your MVP be?