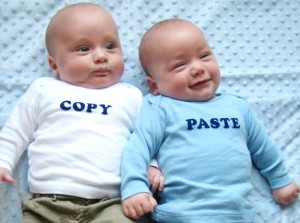 When you run a Kickstarter project, particularly one with active, curious, and engaging backers (which is awesome!), you’ll find yourself saying some of the same things over and over in the comments and over e-mail.

When you copy and paste, you’re eliminating the opportunity to connect with the backer. Instead of viewing that backer as an individual and opening a genuine line of communication with them, you’re treating them as an inconvenience.

It’s the equivalent of having a stranger ask you a question, and instead of replying, you play a pre-recorded message for them and then walk away. You wouldn’t treat someone like that in real life, so why would you do that on Kickstarter?

I briefly touched upon this topic in a Kickstarter Lesson about comments a few months ago. I had noticed a disturbing trend in a number of Kickstarter project forums where people were copying and pasting the same message over and over to “welcome” new backers. Perhaps they had good intentions, but is there anything less welcoming than a generic, stock message? We can do better than that, both as creators and as enthusiastic backers.

I’m writing this Kickstarter Lesson not to be preachy, but rather because in the midst of the influx of all Kickstarter advice you hear, sometimes it’s helpful to have a few simple rules to remember. It’s definitely helpful for me.

In fact, the simple act of almost pasting serves as a trigger to remind me that what I’m about to do isn’t cool. It isn’t the way I want to connect with the backer or potential backer who just took time out of their day to comment on their project or write to me.

Only YOU can prevent copying and pasting. Good luck!

Note: This rule doesn’t apply if you’re quoting someone. Then you probably should copy and paste their exact words so as to not misrepresent them.