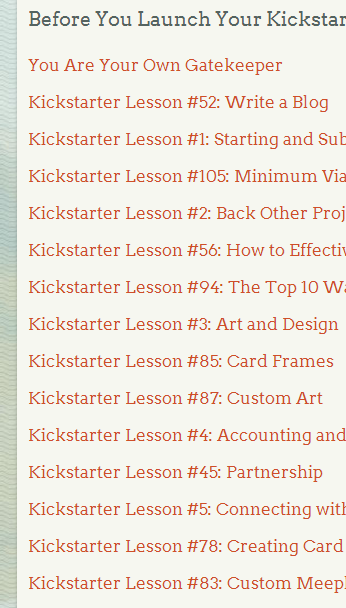 Spoiler alert: There is no shortcut to Kickstarter success.

There are outliers, sure. Creators who get lucky despite not putting in much work or effort. But don’t count on being lucky–your dream is too important for that.

In fact, most of the projects that appear to be outliers are those where the project creator put in a ton of work before, during, and after the project. They put themselves in the position to get lucky–they formed relationships, they built a fanbase, they risked their own money to get great art and design, and they spent a lot of time during the project engaging backers and building a community.

So why am I writing an entry about shortcuts? Well, the other day I got some feedback from a friend (and soon-to-be project creator) about the massive wall of Kickstarter Lessons on this website. His point made me pause and think about the content I’ve been creating. Here’s what he said:

I think you’ve now hit a point with your information that it is overwhelming and daunting. Links to long articles linking articles works for some, but for others – like me – it is just too much.

He continues with a proposed solution:

Rather than writing MORE and linking MORE. I think you should invest time into a clear starting point for each of your prime ideas (How to do a Kickstarter for example) and then spend the time / effort to create a lightweight / visual presentation to this material. Something welcome, positive, and supportive to engage and dig into your content.

My mission with these Kickstarter Lessons is to be a wealth of detailed information about how to run a Kickstarter campaign in any category. I agree that it’s a lot of information—that’s kind of the point. I want it to be daunting, because all too often people look at Kickstarter and think, “Oh, that’s really easy. I’ll just throw anything up there and make $100k.” I want them to realize at a single glance when they arrive at the Kickstarter Lessons page that this is going to take a lot of work. I think shortcuts are misleading–they convey the wrong message when it comes to Kickstarter.

However, people digest information in different ways. Diagrams are helpful, albeit much more time-consuming for me to make than text. Videos are good too (although whenever I’ve made a video, it takes hours to make and I can’t edit it later, and most people say they prefer the written content). And I do have the Funding the Dream podcasts that complement many of the blog posts.

So I’m a bit torn here. I think it’s good that I’ve created an exhaustive list of Kickstarter Lessons that walk a new project creator through every step of the process. That’s the kind of resource I wish I had when I was creating my first project.

But at the same time, I really like the idea of creating something welcoming, positive, and supportive that encourages people to read more. I think there’s value to that, and it might get a new creator’s foot in the door instead of ignoring them altogether. I just don’t want a new creator to only use the summary material instead of digging deeper. Like I said, there are no shortcuts to Kickstarter success.

I’d love to hear what you think about this concept and if/how I could execute it. I’ve already seen the value of lists on the blog–entries like the The 10 Reasons I’ll Back a Kickstarter Project and The One-Week Checklist seemed to go over really well. I also really enjoyed the post earlier this week in which I mentioned some ideas for Kickstarter campaigns and gauged your response via polls and comments. Would you like to see more posts like those?

Also, keep in mind that while this blog helped to get me a book deal, it is not a source of revenue for me. Spending 45 minutes three times a week writing an entry and a few hours a week replying to comments is one thing, but spending several hours per entry to create videos and diagrams is quite another. I have a publishing company to run! :)

There is no shortcut to Kickstarter success, but I believe that any creator with a compelling story and project can be successful. I’d like this blog to help a creator evolve from the “shortcut” mindset to a confident understanding of the intricacies of running a KS campaign.

48 Comments on “Kickstarter Lesson #110: The Shortcut to Kickstarter Success”