One of the clever additions Kickstarter has added to their platform over the years is the mandatory “Risks and Challenges” section at the bottom of the project page. This is the only predetermined portion of the project page–you must have it, and you can’t change the title.

The purpose is to ensure that creators actually think through the Risks and Challenges before launching their project. Also, it gives backers an official place to gauge a creator’s competence.

However, Kickstarter doesn’t monitor the content in the Risks and Challenges section, so it’s up to  you to decide what to put there. My favorite line I’ve see on any project was on a music project I backed, Alanna Boudreau’s Full Length Album. I think this was the first time when I’ve literally been charmed by text in this section of a project:

The other risk has to do with the potential of my being attacked by wild hogs, thus rendering me petrified and mortified. They freely roam the hills in this area of central NY. As far as I know, nobody has lately been attacked by said wild hogs; but it could happen.

However, we can’t live our lives quivering with fear as we ponder the war-path of demented wild hogs, or the likelihood that they will strike with vengeance. Totally impractical. 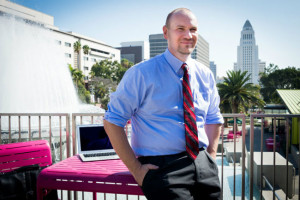 Recently, Jamey pointed out a technique that one Kickstarter creator was using to get the terms of backing the project onto their project page: putting a contract in the “Risks and Challenges” section. However, I’m not really sure what the point of it is, since I doubt that such a contract could be legally binding.

New York-based MAGE Company launched a crowdfunding campaign for The Orcfather, a fantasy-themed mafia-style card game, which funded on October 1. The page, as is the norm, contains a video and information about the game. However, in the Kickstarter-mandated “Risks and Challenges” section, MAGE Company eschewed the usual casual discussion of general projects risks. Instead, they included what appears to be a “Terms of Backing” of sorts.

The terms of the “contract” do a few interesting things, such as:

That most certainly sounds like they are trying to create a contract with the backer, doesn’t it?

But is it legally binding?

I’ve written before about two ways to make your Terms of Service fail (this post goes over basic contract law, as well). This situation is a bit different, though. For the legal background on agreements of this type, let’s check out the holding in now-Supreme Court justice Sotomayor’s 2002 Specht v. Netscape Communications Corp. opinion.

Netscape was attempting to enforce an arbitration provision in their Terms of Service for downloading their SmartDownload software. However, the court’s examination of the placement of these Terms and whether or not the contract with the user was valid revealed a large flaw in Netscape’s agreement.

Basically, the link to the Terms of Service was below the visible screen on the download page, requiring the user to scroll down to see it. There was no “clickwrap” agreement; meaning that the user was not required to click through the agreement, check a box or make some other affirmative move before downloading the software. This affirmative action on the part of the user is generally enough to create a binding contract. Simply putting the link on the page, however, particularly when it is below the visible screen that a user would normally see upon arriving at the page, is usually not enough to create that contract.

So, what does this have to do with The Orcfather?

Let’s look at The Orcfather’s Kickstarter project page. At 100% size in my browser, when I arrive at the page I only see the project video and some info on current funds raised. Also, I can click the “Back This Project” button, as well, without even scrolling down. This is almost an exact recreation of the Netscape situation.

So, to me, it’s pretty obvious that no binding contract is formed, no matter what the last line of the “Risks and Challenges” section says. I’m not their attorney and I have no connection to the project, but I just don’t see the point in crafting it like a contract. When I posted this opinion on Jamey Stegmaier’s blog comments, he replied that “As for the Risks and Challenges disclaimer, I view it more as a social contract than an legal contract. It’s a formal way for the creator to say, ‘Here’s what you can expect from me, and here’s what I expect from you.’”

Naturally, I don’t agree. If they wanted to do that, they could have simply put it in the normal format that others use. If they didn’t want to create a contract with the backer, then why bother saying “BY PLACING A PLEDGE ON THIS CAMPAIGN, YOU ACKNOWLEDGE THAT YOU HAVE READ, UNDERSTAND AND ACCEPT THE RISKS & CHALLENGES STATED IN THIS SECTION.”? Much of this is dealt with in the Kickstarter Terms of Service, anyway, which DO adhere to the principles of creating a binding contract.

Why am I not allowing anyone to have any fun here?

Well, I am an attorney, after all.

Plus, I think that it is wrong to add this kind of unenforceable thing to your Kickstarter project page, for two reasons. First is that it creates the impression that a contract has been formed, even when it hasn’t. It adds to the possibility of litigation and the need to argue over one more thing, which isn’t necessary. Second is that it promulgates the impression that this IS proper and that it IS enforceable to those who don’t know any better. It’s just bad practice.

What is the takeaway for a Kickstarter project creator? Well, for one thing, it would be instructive to learn the law on how to create a binding contract in cyberspace. This is important whether you are selling goods or operating a website that has a Terms of Service. There is a positive thing here, which is that the various risks inherent in the project are well laid out, both from the creator’s end and the backer’s. The potential delays, incorrect shipping addresses and other issues brought up in the section are a good way to get that information out and set expectations. It’s just not a contract, and I feel that the ineffective language to that effect does the section a disservice.

So what should you write in the Risks and Challenges section?

Disclosing risks is the normal (and legally required) practice when you are soliciting investment. While Kickstarter is a very different setup, more akin to a donation or patronage without the expectation of profit, it is still very important to clear the air and be upfront about the very real risks in giving seed money to a project.

Generally, one of the big risks in an investment is the possibility that it might not bear fruit – the investor could lose all of their money. This is also a big potential risk with Kickstarter projects. Just because there is not profit potential, the fact remains that a Kickstarter project may not work out and the money may be spent in vain. We’ve already seen this happen (though I believe the FUD surrounding Kickstarter project failures is highly exaggerated) multiple times. So this, I believe, is the biggest risk that should be outlined. Of course, this doesn’t take away the obligation to deliver, but it can certainly prepare the backers for that possibility.

Going hand-in-hand with the possibility of total failure is the very real and common risk of delay. For some reason, many commentators are unable to understand that the delivery date listed on the project is simply an estimate: the creative process of creating a product or game is very fluid and can easily lead to delays. Couple that with the fact that we’re dealing with human beings, most often creative types who have not run businesses before, and you see how it is important to be upfront about the potential for delay.

Another big risk that the Orcfather project page highlights is from the other end: the risk posed by a backer who has changed addresses or incorrectly inputs the address. Through no fault of the creator, a copy of the product may be shipped to the wrong place. Requiring an extra payment for reshipping, I think, is not a bad thing. After all, it is the backer’s fault if they do not keep the creator informed of address changes. Often, a backer forgets about a project that they have backed, particularly when that project is delayed.

There are plenty of other risks that a project can face. I’d love to see some more ideas in the comments below.

As a side note, I’m not a big fan of having a company create a project page for another. As far as I’m concerned, the backer-creator contract is created between the one making the page and the person backing it. The provision in the Risks and Challenges section here is, in my opinion, ineffective as to shifting any liability to the other company. I’m not sure what the advantage is of having someone else put up your project – if you’re following what Jamey says here on the blog, you’ve been backing other projects and using social media to get the word out, so it being your first project shouldn’t have that big of an impact!

If you’d like to see a concrete example of a pretty solid Risks and Challenges section (keeping in mind that it will vary quite a bit between projects and creators), you can check out the one I wrote for my most recent project here.

If you’re a backer, what kinds of things do you look for in the Risks and Challenges section (if you look at it at all)? If you’re a creator, is there any important information you include that we didn’t mention above?