In the last 2 weeks of my Kickstarter campaign for Between Two Cities, a few people have asked the same question: “Why isn’t there a reward level that includes your other games? Other projects do that.”

It is true that other projects sell existing inventory as part of campaigns to create something new. But should they?

There are lots of crowdfunding websites, but let’s focus on one of the three tenets listed in Kickstarter’s rules: Projects must create something to share with others.

Does that mean Kickstarter prohibits selling existing inventory? No. But it does speak to the spirit of Kickstarter–it’s a platform for creating new things, not selling stuff you already have in stock. Kickstarter has said very specifically that it’s not a store.

When I create a Kickstarter project, one of my primary goals is to make everything as clear as possible to reduce any confusion. When you add existing inventory to a project–especially for an old product that isn’t directly related to the new product–you increase the potential for confusion. 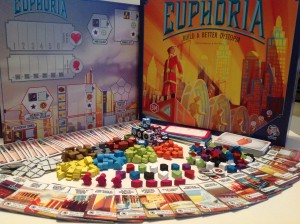 For example, on my Euphoria project, I decided to add reward levels for Viticulture. But a lot of people had no idea what Viticulture was. Is it related to Euphoria? Is Euphoria a better game if you have Viticulture? To me the answer was clear–they’re completely separate games–but that may not be clear to someone who doesn’t know our product line.

Also, adding an unrelated product distracts from the core element of the project. When I sought funding for Euphoria, it should have been my sole focus–every element of the rewards, the project page, project updates, and conversations in the comments should have been about Euphoria. But sometimes it took second stage to Viticulture. As I wrote in Euphoria’s project postmortem, I considered that to be a big mistake.

You also have to consider the impact that selling inventory through Kickstarter has on the overall funding goal. Your funding goal and stretch goals are based on manufacturing and shipping the new thing you’re trying create, right?

So if some of the funds you’re raising have nothing to do with manufacturing and shipping the new thing, they dilute the funding goal. It may look like you’ve raised $50,000 for your gelato machine, but really $10,000 of that is for the infrared ice cream scooper you already have in stock. So it’s tough to calculate how your economies of scale are being improved, which impacts stretch goals.

Selling currently inventory as part of reward levels can also cause some logistical issues. From a backer perspective, they’re happy to have you consolidate the ice cream scooper with the gelato machine–that means they only have to pay shipping fees once for both of them.

But you have 500 scoopers in your US warehouse, and the gelato machine won’t be manufactured for another 6-8 months. So what do you do? Do you earmark the scoopers you sell through Kickstarter, committing to let them sit in your warehouse for the next 6-8 months? If you do, then every gelato machine that comes with a scooper must be shipped to your US warehouse (instead of directly to fulfillment centers in Canada, Europe, Asia, Australia, etc), driving up shipping costs and customs fees for all of those backers.

Alternatively, you can not consolidate shipping fees and send out the products separately, but then you have a whole array of shipping costs that are likely very different that the shipping fees for the gelato machine. Plus, say you have 300 scoopers in the US, 100 in Canada, and 100 in Europe–you’d have to create three separate pledge levels with limited quantities for each of them, completely diluting your reward sidebar.

It Has a Negative Impact on Retail and Distribution

When we recently announced that we were working on a Euphoria expansion to go on Kickstarter in 2016, several people asked me if it would include an option to get Euphoria (even though Euphoria’s second printing is being released this week). I got the same question about the Treasure Chest even though it’s in stock around the world right now.

These are not unreasonable people. The problem is that they’ve been conditioned by some Kickstarter creators to expect the best deal on games–on existing inventory–on unrelated future Kickstarter campaigns. So instead of buying the thing that’s currently in stock at their local game stores, they’re waiting for the company’s next Kickstarter campaign.

I don’t think it’s a problem for companies to offer special deals on existing inventory. You have to sell stuff to stay in business. But do you really think retailers and distributors are going to continue to work with you if you’re undercutting them by selling your existing inventory at deep discounts during every Kickstarter campaign you run?

As you can probably tell, I don’t advocate selling existing inventory as part of Kickstarter rewards or add-ons. It’s not in the spirit of Kickstarter, it creates confusion and detracts from your core focus, it dilutes the funding goal and stretch goals, and it creates a number of logistical issues.

However, this doesn’t mean you can’t have a section at the bottom of your project page about your other products with links to places backers can buy them. Not only does this give people a way to buy your in-stock products without diluting the funding goal, but it also helps to inform them about the type of company you’re running.

I’d love to hear your thoughts about this in the comments.