Recently I’ve noticed a possible emerging crowdfund trend that intrigues me. I’ve only seen it on mega projects, but I see no reason why these method couldn’t be used by any creator.

The method in question is the use of achievement systems in addition to (or in place of) stretch goals. The two projects I’ve seen this on are Exploding Kittens and Con Man (thanks to Chris from TROBO for alerting me to the latter).

The way these achievements work is the creator presents a series of goals–many of them related to social media–and when a few of them have been met, the creator gives all backers something cool.

It’s very similar to the typical stretch goal system, but the part about “when a few of them have been met” makes a big difference for projects that have fewer stretch goals (i.e., the product they launched with is already really nice). It gives backers the sense of progress by taking away the feeling of big gaps in funding between each goal.

It also allows for creators to offer lots of fun little things for backers to do. For example, on the Exploding Kittens campaign, one of the achievements was to post 25 selfies with goats. Selfies with goats does nothing to help with the economies of scale of making a card game–it wouldn’t work as a stretch goal that improves the product. But it’s fun, and the motivation of getting backers closer to a new item was enough to get them to do it.

Before I write more about this, here are some big screenshots of what the Exploding Kittens and Con Man achievement charts look like: 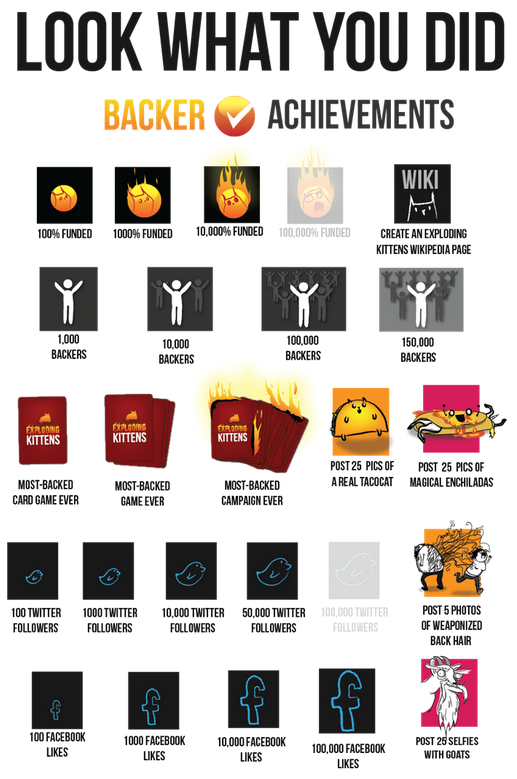 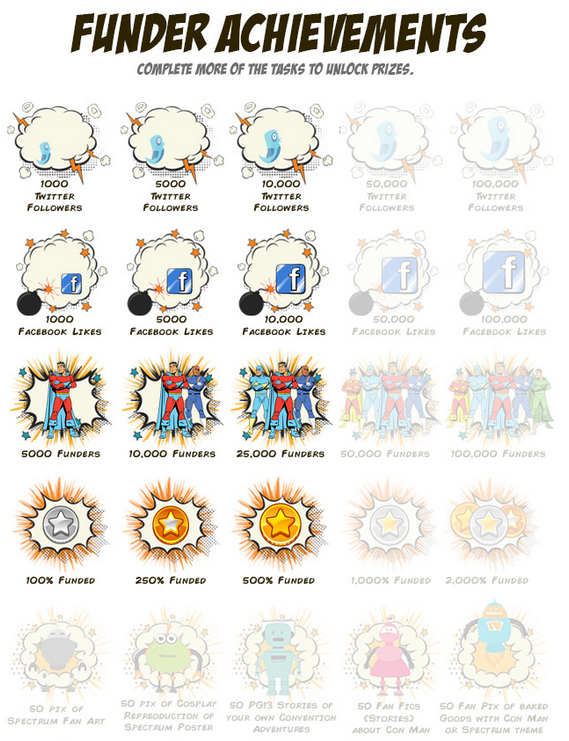 Here’s a summary of some types of achievements used (including some new ones) that are applicable to non-mega projects:

Even as I’m writing this, I’m like, Why aren’t I using this system for my new treasure chest project? It fits the description of a project that could benefit achievements: It doesn’t have many stretch goals, and the stretch goals it has are spread out (every $25k). They’re also not particularly exciting–they just offer more resource tokens. An achievement system might inject some life into them.

Should You Use Achievements, Stretch Goals, or Both?

It’s hard to give a definitive answer at this point, as this concept is still quite new. My early hunch is that you should choose an achievement system OR a stretch goal system, not both. Focus is good.

What do you think about achievements? Should I try it out on my upcoming treasure chest project?