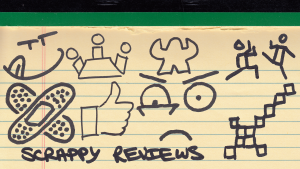 A few years ago I watched a YouTube video about the health dangers of sitting down for hours at a time. The video had a lasting impact on me, and I attribute it largely to the way the information was presented.

The format was a “whiteboard video,” a dynamic approach to sharing a large amount of data in a short amount of space. As the narrator talks, the concepts they describe are illustrated in real-time on the screen. The visuals are good for both short-term attention spans and long-term memory.

I never really considered this type of video for Kickstarter until JR Honeycutt called my attention to a similar video on the Millenium Blades project page. The video (on YouTube here) explained a complex game in simple terms.

I instantly knew I wanted one for Scythe.

So I reached out to Klaus Kneale (klauskneale AT gmail DOT com) to see if he would make a “Scrappy Preview” video for me too. He kindly agreed, and a few months later I sent him a prototype.

This is actually one of my favorite aspects of the Scrappy Preview video: I don’t have to write the script. I love to write, but Klaus is particularly good at condensing a lot of information into a short, visual video. He plays the game writes the script, and sends it to you for review before he moves on to the illustrations.

For the same reasons I like the video at the beginning of this post, I really like Klaus’s illustrations. They have this friendly, accessible feel to them.

Yes, I have a project video for Scythe, a full gameplay video, a few review videos too. But I think the Scrappy Preview is a great way for backers to understand the game in only a few minutes. It’s a paid service (contact Klaus for his rates), but I think it’s well worth the expense.

I’m a big fan, and I think this style of video could work for a project in any category. Feel free to watch the Scythe Scrappy Preview video below to see what I’m talking about.