One of my favorite things about crowfunding is gauging demand before production begins.

Before Kickstarter, manufacturers had to make educated guesses about how many units to make in the first print run of a product. If you make too few, you lose the opportunity to maximize sales while the product is hot. If you make too many, you’ve overspent on a product you can’t sell. Or, worst-case scenario, hardly anyone wants your product at all.

With crowdfunding, not only can you figure out if enough people want the product to justify a minimum print run, you can also gauge demand for the size of the initial print run with pinpoint accuracy. You can also use that information to figure out how many retail copies of the product you want to make (there is no set formula for determining that amount).

That isn’t to say I use crowdfunding to gauge demand for every print run, though. I prefer to use crowdfunding to create things that don’t already exist, as I see that as the best time to build community around the product, improve it with feedback and stretch goals, generate excitement for it, and raise funds.

So this leads to some interesting situations after the first print run when I need a way to decide if there’s enough demand to justify another print run for some of the more niche products associated with the original Kickstarter. Just recently I started using a solution that I wanted to share with you.

For example, as part of the Kickstarter campaign for Tuscany, we made custom metal lira coins. We included them in a version of Tuscany called Tuscany Prima, and we let people add them to their pledge. After the campaign, we sold them directly and through Meeplesource.

A month or so ago, we sold out of the metal coins. People started e-mailing me asking when we would make more coins. My answer: “I don’t know if we’ll make more.”

It was an honest answer, though I wasn’t satisfied with it. I wasn’t really learning anything other than that it seemed like a few people wanted metal coins. And it didn’t feel like good customer service.

So I finally decided to make a change. I created the Future Printing Request Form. It’s broken down into two sections: Products we’ve made in the past but are out of print or hard to get (just because we have Euphoria in stock in the US doesn’t mean stores in, say, Finland, are carrying it) and products we could make for the first time in the future.

The form has been a HUGE help so far. While it only represents a tiny sliver of the board game market, at least it gives me some idea if the e-mails I get are indicative of greater demand for a specific product. Also, I try not to forget that it’s only a survey–people tend to be very forthcoming with their opinions up until the point that they actually have to spend money.

I’ve been pleasantly surprised by category of products that could exist in the future. If someone has a clever idea for one of our games, I can now add it to the list to see if other people want the same thing. I did that the other day when someone suggested we make dual-layered recessed vineyard mats for Viticulture.

Perhaps most importantly, it puts the power in the hand of the consumer. No longer do they have to wait helplessly for me to decide if we should make more coins. Whether they e-mail me or see on our website that the coins are sold out (see below), they have something they can do right now that will make a difference. Just click on the form and tell us what you want. 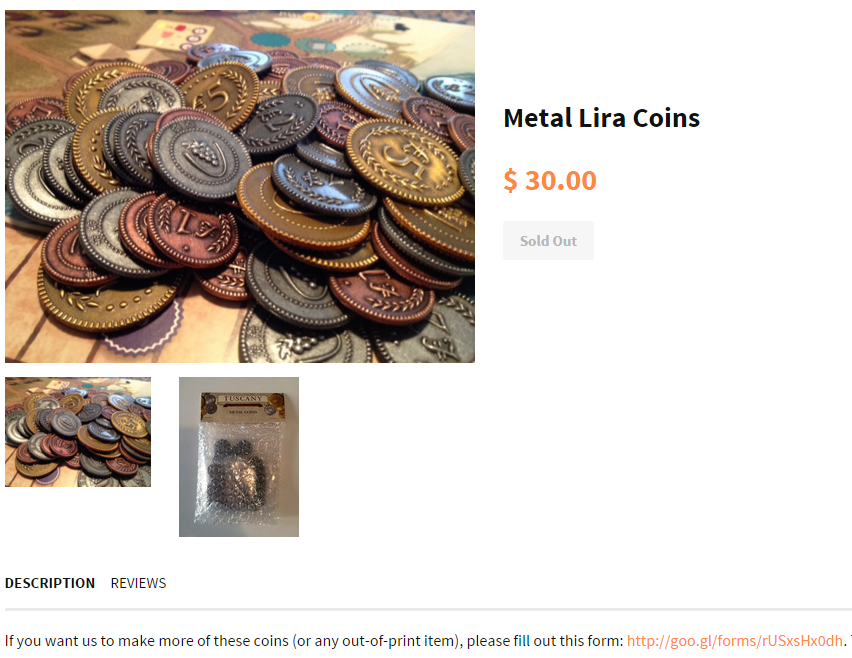 What do you think about this concept? I’m sure other companies have used something similar in the past, but I couldn’t think of any examples for this entry.