One of the formative moments for Stonemaier Games happened a little under 3 years ago when two companies reached out to me with similar offers: They wanted to make foreign-language versions of our games (one in Asia, the other in Europe).

Today I’m going to talk about the various benefits and options creators have for both localization and worldwide accessibility on the product level. I’ll discuss this through the lens of a board game company, but many of these ideas apply to any product.

The Benefits of Worldwide Accessibility

When I started Stonemaier Games, I had the naive misconception that the only people who were going to care about our games were English speakers. I figured, if you don’t speak English, why would you want to play a game that relies on the English language?

As it turns out, the desire to play a game has nothing to do with the language of the game. The language is just an obstacle between some people and what they want. By offering your game in multiple languages–we’ll discuss the options for that in a moment–you significantly increase your potential audience.

Also, I’d relate it to when you travel abroad and attempt to use a few words and phrases in the native language. The effort to connect is appreciated. 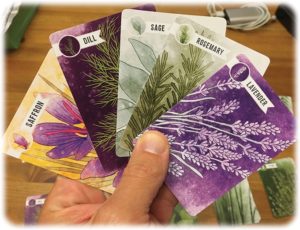 One method used frequently in board games is to make components language-independent (or “language neutral”). Many games use symbols and icons instead of words. Or, when words are used (see cards from Herbaceous on the right), they’re labels, not descriptors.

The challenge, though, is that by removing language, you can sometimes sacrifice gameplay or significantly increase the complexity of understanding and remembering how to play the game (or use the product). Imagine if Magic the Gathering tried to convey everything with icons instead of words–it would be a mess.

Also, as I’ve learned by talking to localization partners, they actually prefer games to be language dependent, as it ensures that people in their region will buy their version of the game.

So choose what’s right for your game, and maybe consider a hybrid system like Deus, which has cards that feature both iconological and textual descriptions.

Regardless of language independence, players usually have to read the rules of the game to understand how to play it. So it can be incredibly helpful to have volunteers who are willing to translate the instructions.

We started doing this with Euphoria. Some backers reached out to me and offered to translate the rules. As I started to see the value of it, I put out a call to other backers and ambassadors to see if they would be willing to translate it as well (you could do this on BoardGameGeek or Facebook too). At this point it’s something we seek to do before a campaign if possible; if not, definitely before the game is released.

Here are a few things I’ve learned about volunteer-driven translation:

We make all translated rules available for download on our website. Also, if a game has a lot of language-dependent cards, we’ve started creating one-sheet translatable guides for them (see examples here). 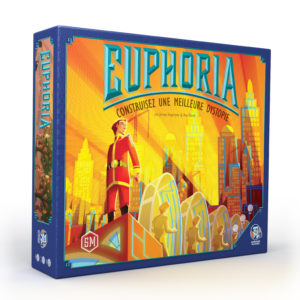 This is the big moment: You’ve published a product in English (or you had a successful crowdfunding campaign), and a company reaches out to you about publishing a localized version of the product. Or maybe you reach out to them, and they’re interested. What are your options?

Co-Production: This is the method that Stonemaier Games has used the most often. It means that you and your partner(s) are going to share a print run with the same manufacturer, which is helpful for economies of scale for all of the language-independent components. The partner handles the translation, ensures that the information on the box meets their local guidelines, and pays you for the production, and you coordinate production.

This can be a good arrangement for both parties, but it also means that you’re intrinsically linked to each other. If you’re slow to get the final version of the rules to the partner, they have to wait for you. If the partner is slow to complete their translation, you have to wait for them. Set clear boundaries and don’t let it impact your production schedule if you’ve already committed to certain deadlines. At Stonemaier Games, we’ve learned to only make the first print run in English–it’s the second print run that can be in other languages too.

Make sure to have a very clear contract with your localization partners, particularly regarding payment and freight shipping. With a few exceptions, we typically require 50% of the payment when the manufacturing starts (if it’s not paid, we move ahead without that partner–they’ll have to wait for the next print run) and the second 50% right before the games leave the factory. The more trust we have in the partner, the more flexible we can be.

In terms of royalties, my preferred way to do it is offer partners a set price that includes the manufacturing cost and our royalty (a few dollars). Alternatively, the royalty can be based on sales.

Licensing: This is a more hands-off method. Instead of co-producing a product, you simply license the rights for another company to make that product as they wish (with as much oversight as you put into the contract). Your royalty is usually a set amount per game, either paid up front or based on sales. I’ve only done a few deals like this, as it feels a little odd to give so much creative control of my brand to someone else.

In-house production involves you hiring translators to translate the product. That’s the easy part. The hard part–and the reason few companies choose this option–is that you have to find a way to sell thousands of copies of a game in a language you don’t speak to a region that you may know very little about in terms of distribution. That’s why a co-producer can be so helpful.

The best thing I can say about this is if you have a really good relationship with international distributors, you can simply ask them if they think they could sell 1000+ copies of your product in their language in a few months. Without some gauge of demand, it’s a pretty big risk.

A hybrid solution is to include rules for more than one language in the box. The unfortunate aspect of this is that it amounts to an immense waste of paper, as the vast majority of people only need 1 set of rules. Also, few product boxes have room for descriptive text in more than one language.

That should cover many of the options available to creators as they try to increase the worldwide accessibility of their product. If I missed something or could have been more specific about something, feel free to ask me in the comments.