Kickstarter Lesson #207: What Should You Do If Someone Won’t Pay? 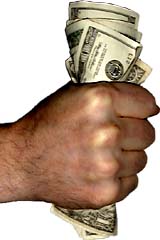 This is a somewhat sensitive subject, and I’ve debated whether or not I should write about it. The reason I’ve decided to proceed is the reason I’ve written many of these articles: If you can learn from my mistakes, you don’t have to make them yourself.

I need to start with a big disclaimer: I’m going to tell a story in this post, but I’m specifically not naming names or pointing fingers. This is a private matter between Stonemaier Games and another company (we’ll call them Company X), and I’m going to have to obfuscate and simplify some details to keep their identity anonymous. I hope you’ll respect that privacy in the comments.

Why does this subject apply to crowdfunders? After all, one of the great things about crowdfunding is that you’re paid up front through whichever platform you’re using (Kickstarter, Indiegogo, etc.)

Yet, as any creator can attest to, it doesn’t always work that way. Sometimes you have opportunities to sell large quantities of a product or even share a print run with another company. Those payments aren’t always made up front.

Or perhaps you’re a little bit like Stonemaier Games: You’ve used Kickstarter, but you’ve also become a company outside of crowdfunding. You have orders with distributors, retailers, international partners, manufacturers, etc. Or perhaps you’re a different type of entrepreneur. Freelancers have to deal with this all the time, unfortunately. That’s why I prioritize paying them.

The point is, if this doesn’t apply to you today, it will probably apply to you someday. Bookmark this article for that day.

Company X is, at least in part, a distributor. That means they buy games from us through our broker and then sell them to retailers.

About a year ago, we noticed that Company X hadn’t paid for anything in a while. You would think this would have been more apparent, but sometimes we work with companies in such a way that the balance on our account can swing from red to black depending on what we’re doing. They provide us some services, and we provide them some services, so instead of issuing a constant stream of invoices back and forth, we just keep a balance.

The reason we noticed was that the end of the year was approaching, and the balance had grown to a sizable amount. So I asked Company X to pay off the amount.

They responded to say that it would be really helpful for them to wait until early January to pay. They had a list of reasons, but overall, they just asked for a little more time.

Of course that should have been a red flag. But they hadn’t ever not paid an invoice before, and they were a key partner for us, so I gave them some extra time.

Then January came around, and they still had some reasons to wait a little longer. Then February.

By this point, it was starting to get pretty annoying. But I wasn’t concerned that they’d never pay, and we had something coming up that would result in us owing them a lot of money, so we kept pushing it back.

Here’s where the the tricky part comes in, the reason that this topic is even still on my mind: In mid-February, Company X ordered some of our games from our distribution broker. I wasn’t involved in the transaction, and I hadn’t communicated to my broker that this company owed us quite a bit of money.

The transaction went through, and our broker shipped a bunch of games to this company. Distributors typically don’t pay until they receive the games, so no money was exchanged. Super obvious spoiler alert: It’s now 9 months later, and they still haven’t paid for those games. (They did, however, resolve most of their other balance with us.)

The lessons are clear:

Basically, don’t do anything I did.

How Do You Get Your Money?

Well, here’s the tough part: If someone is adamant about not paying you, it’s going to be really hard to resolve the problem without going to court. Litigation will likely cost you way more than the amount you’re owed.

Despite this being the title of this article, I don’t have a good solution for you. I’ve talked to Company X face to face, on the phone, and over a series of increasingly firm e-mails. I’ve talked to our lawyer. I’ve e-mailed a branch of the government that I can’t remember, as they never replied. It doesn’t help that Company X isn’t based in the US.

So at a certain point, I just had to ask myself: Is it worth continuing to let $23,000 weigh on me and Stonemaier Games? Or should I move on?

For the most part, I decided to move on. I hope that Company X someday decides to do the right thing and pay their bill. That is my hope.

Two Other Things You Can Prevent This Issue

My experience with company X has made me restructure the way I work with many partners, particularly when we’re talking about sums of $10k+. The structure is all about risk mitigation.

For example, we have a number of international partners who buy into print runs of our games. We might be making 6,000 copies of English Scythe, and they’ll join the print run for 1,000 copies of, say, German Scythe. Right before we start the print run, the company must pay us 50% of their costs. If they don’t, we cut them from the print run. Then, right before the games ship out of China to the company, they must pay us the second 50%. If they don’t, we’ll pay back the original 50%, take ownership of the games, and sell them to someone else.

These can be construed as harsh measures, and they require the other companies to trust us and our manufacturer. Some companies aren’t comfortable with this, and that’s okay. Part of this type of risk mitigation means that we may miss out on some contracts. To me, that’s better than putting ourselves in the same position as we did with Company X.

The other thing you can do–something we haven’t tried–is to use an escrow account. Basically, if you issue an invoice to a company for $20,000 and they’re hesitant to pay it while you still have the inventory, they can put that money in escrow. The bank will hold those funds until the company has received the inventory. If anyone has done this, I’d love to hear about this in the comments.

Like I said at the beginning, writing about this topic is not something I relish. I’m not trying to air dirty laundry, as they say. Rather, I really hope my mistakes can help you avoid situations like this, whether it’s for $100 or $100,000.

If you’ve been through something similar and have any suggestions or insights I haven’t covered, I’d love to hear about it in the comments.

Addendum: If you are a game publisher looking for partners in Europe and you want to avoid Company X, feel free to contact me privately at contact@stonemaiergames.com.

16 Comments on “Kickstarter Lesson #207: What Should You Do If Someone Won’t Pay?”