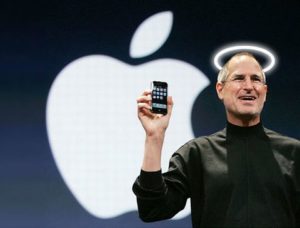 I recently learned the term “the halo effect,” and I think it has some interesting applications to crowdfunding and entrepreneurship.

Specifically, I’m talking about the halo effect as it applies to branding: It’s when a positive experience or familiarity with one product/service makes you more likely to try a different product/service from the same company.

Apple is the classic example of this. How many of you bought an iPod and then later bought an iPad, an iPhone, and/or a MacBook? They’re all tech products, but they’re completely separate. But if you had a good experience with the iPod and you became familiar with the interface, perhaps it encouraged you to try out other Apple products later.

A lesser-known example is Studio Neat, one of the earliest big success stories on Kickstarter. They made a simple iPhone stand called the Glif. Then they made a touch-screen stylus. Then a bracket app. Then a kit for making ice for cocktails. Completely different products, all with the same elegant design and streamlined Kickstarter campaigns.

I really like the idea of lowering the barrier to entry for any customer, including existing customers. It’s not about promotion–I know that not everyone who likes Viticulture will also enjoy Scythe or our realistic resources. But if I’m doing my job, hopefully they’ll feel just as comfortable with one of our products as the others.

Some key examples in the board game world are Red Raven Games and Garphill Games. Both of those companies offer familiar iconography, rulebooks, and themes spread across completely different games. If you’ve played one of their games, it’s going to be easy to pick up another one.

I’d like to say that Stonemaier has dabbled in this concept, but the closest we’ve come is on Kickstarter. We’ve offered very different games and products on Kickstarter, but we’ve tried to maintain common elements on the project page like the money-back guarantee, streamlined international shipping, and reward configuration.

The one danger I’ve seen in attempting to create the halo effect is when it doesn’t carry over from one product line to another. Sometimes this is necessary–my Kickstarter campaign for the Treasure Chest was very different than my previous campaign (Tuscany), particularly in the stretch goals, reward structure, and comments. Both were very successful, but I think some people were hoping that their experience with one would be the same as before.

Have you seen the halo effect of branding in action, either as a consumer or a creator?