Up until recently, I didn’t believe in magic bullets and shortcuts for Kickstarter success. The vast majority of successful projects are successful because the creator put in a lot of hard work and made a lot of smart decisions.

But a few weeks ago, I read a comment on a Facebook group about Kickstarter that I had to take seriously. Here’s a snippet, and when you see the full comment later in this article, you’ll know why it’s such a big deal:

A tastemaker is a person, organization, or platform that reaches and influences millions of people, usually on a daily basis. These are the Pewdiepies, the Patrick Rothfusses, the Lady Ga Gas of the world. A single mention of your project by a tastemaker can have a huge impact on its success.

I went back and looked at the stats from my Kickstarter campaigns to jog my memory, and it appears that Stonemaier has never had a tastemaker impact one of our projects in a significant way. The closest examples were Shut Up & Sit Down ($12,013 in pledges) and Kotaku ($6,623) for the Scythe campaign.

I mention that because identifying and leveraging a tastemaker (or just getting lucky) isn’t necessarily a magic bullet, nor does your campaign need one to be successful. But it doesn’t hurt to spend a small percentage of your time nurturing relationships with a few tastemakers. Worst-case scenario, you get to interact with some interesting people.

But don’t take it from me. Take it from the CEO of one of the most successful Kickstarter-driven companies ever, Chern Ann Ng of CMON: 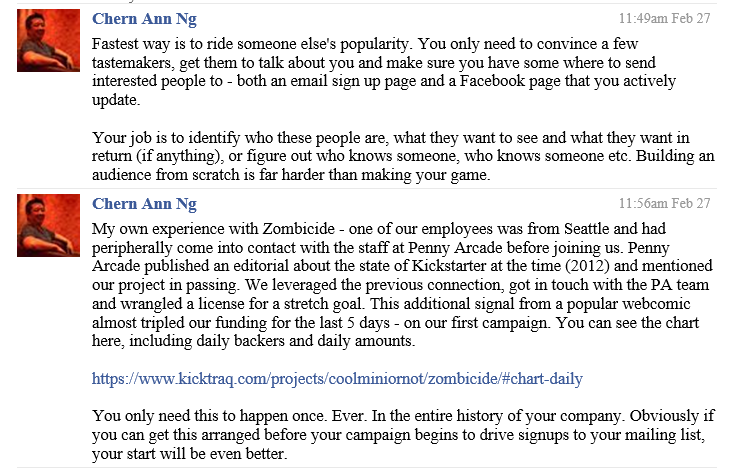 Chern Ann shares a lot of great points in this post, but let’s start with the big one:

“You only need this to happen once. Ever. In the entire history of your company.”

I think this is 100% correct. If just once a true tastemaker mentions your project, whether it’s before, during, or even after your campaign (if you’re still accepting pre-orders), the backers it provides for you can become a strong foundation of a permanent fanbase. You might have gotten there eventually anyway, but a tastemaker can significantly accelerate the process.

Catching the eye of a tastemaker doesn’t need to be a passive process–you don’t have to sit back and hope you get lucky. But it also shouldn’t be a pushy, self-promotional process. Chern Ann offers a happy medium:

In other words, months before you launch your project, target a few tastemakers who you admire/follow or who are a good fit for your project. Learn about what they like and dislike. Interact with them in public (and, when appropriate, in private, but keep in mind that tastemakers get a lot of messages). Then, at the right moment, mention your project in a clear but non-aggressive way to see if there’s a way they might be compelled to talk about it on their platform.

But there’s a catch, particularly before and after the Kickstarter campaign: If you have no way of capturing all of those referrals to sustain communication with them, you might end up being a one-hit wonder:

“Make sure you have somewhere to send interested people to–both an email signup and a Facebook page that you actively update.”

This is why it’s so important to have a home base where people can discover you and stay in touch. I recommend an e-newsletter, a Facebook page, and some sort of ongoing content (podcast, blog, etc).

Again, finding a tastemaker is far from the only path to Kickstarter success. There are many more reliable ways to build a crowd and attract interest in your project. But there’s no doubt in my mind that a tastemaker can have a significant impact on your project and your company.

Have you ever been influenced by a tastemaker? Or maybe you’ve seen a crowdfunding project’s funding goal skyrocket after a tastemaker mentioned it on their platform? I’d love to hear your story in the comments.