Kickstarter Lesson #249: The Frequently Asked Questions to Answer in Your FAQ

A long, long time ago in the days of 2013, I wrote a blog post recommending that creators prepare their FAQ before launching their project. But…I didn’t actually offer any specific questions that backers frequently ask.

Flash-forward to the present. I heard from JR Honeycutt that in preparation for the launch of Fireball Island on Kickstarter, he was examining the FAQs of various projects. I invited him to write a guest post on the subject. Thanks JR! 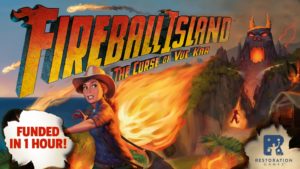 Hey friends, I’m JR Honeycutt, Tinker-In-Chief at Restoration Games. I’m a part of the team for the Fireball Island: The Curse of Vul-Kar campaign (currently live on Kickstarter), and have been involved in quite a few other Kickstarter campaigns, like Feudum: The Queen’s Army (Odd Bird Games), Tesla vs. Edison: Powering Up (Artana), and Millennium Blades (Level 99 Games).

I’ve found it useful to imagine campaigns from the perspective of my backers–people with very little emotional attachment to me or my product. For instance, despite considerable nostalgia for Fireball Island, we worked hard to use our KS page to showcase the game for what it is now, outside of the context of the original game. What if they’d never played it as a kid, or never heard of it at all?

Campaign pages are a storefront, where people walk in off the (digital) street and see what I have for sale. What questions will they ask me? How will I gain their trust, both in myself and the product I’m creating?

To that end, here are 4 questions I’ve seen backers ask consistently over the years, accompanied by examples of how I and my collaborators have addressed them:

In my experience, it’s because my collaborators and I need support to make the best possible game. Big games like Millennium Blades (campaign run by Brad Talton of Level 99 Games) and Fireball Island: The Curse of Vul-Kar have a lot of room for additional content. Being able to gauge demand through Kickstarter led to plenty of stretch goals on both projects, which introduced new game content that may not have existed without the campaign support to allow for it.

Savvy backers want to know what they’re going to get as a reward for their support. This may be Kickstarter-exclusive content (something Jamey has covered extensively here, here, and here), or it could be a discount on product, an early delivery, or inclusion in the game in some way (like printing their name in the rules).

2. Will there be a pledge manager, and if so, how will it work for this project?

If the answer is yes, backers benefit from having the process explained in the campaign page on launch. For example, Feudum: The Queen’s Army campaign, Mark Swanson included a list of all of their available products, with the discounted price backers would receive when they used the pledge manager. This helped backers calculate how much they’d like to spend, and made payment through PayPal possible for backers who wanted it, provided that they pledged at least $1 during the campaign.

This was a reward for backers who supported him during the campaign, since only folks who pledged would have access to the pledge manager. It allowed Mark a reference to point to when backers asked, which saved him time during the campaign.

3. Can you ship to [country]? Why are the shipping costs the way they are?

Kickstarter has taken steps to make shipping details easier to communicate to backers. Part of setting up a campaign includes pricing shipping in regions you’ve selected, and backers are required to select from that list when they pledge. I’ve found it useful to present that information in an infographic (preferably more than just a copy/pasted excel tab) for easy reference.

For Fireball Island, we only have the rights to sell the game in English to the US, Canada, EU, and Australia. Many of our backers have requested the game in other languages, to which we can only respond, “we don’t have the rights to do that”. It’s an unusual case, but we stated it plainly on our page and in our communication to help affected backers.

4. Is it language independent? If not, will it be available in [language]?

I consider language independence to be a development task alongside component design or mechanisms in the game. For Tesla vs. Edison: Duel, we developed the game until all actions could be represented by a small set of symbols. This made the game more accessible for our backers, since they needed to read less during play. It also kept the cards text-free, except for the names of the cards.

Localization partners can help translate and distribute games where needed. When possible, I recommend arranging those partnerships before launch, so those partners can be listed on the campaign page as a reference for backers. It’s not unusual for localization partners to reach out during or after a campaign, which may require an update to backers that a new option is available.

Thank you, JR! JR also went on to talk about how there are questions specific to each project. By putting yourself in backers’ shoes and trying to determine these questions–and your answers–in advance, you may be able to prevent confusion and discover some new opportunities. He offered 2 interesting examples of this:

Asking this question led us to speak with our distribution and fulfillment partners about getting backers our games (like Downforce: Danger Circuit and Dinosaur Tea Party). Addressing this early likely saves us (and the backers) money in fulfilling these orders, and gets games to our backers as early as possible.

Asking this question prompted Artana to include a Broken Token insert in the Tesla vs. Edison: Powering Up campaign, which was widely appreciated by backers.

Do you have any other frequently asked questions you would add to this list? Keep in mind that the project page itself should contain a wealth of information. I view the FAQ as a repository of topics that some backers are curious about, not information that all potential backers need to know when deciding if the product is a good fit for them.

12 Comments on “Kickstarter Lesson #249: The Frequently Asked Questions to Answer in Your FAQ”