Kickstarter Lesson #26: Paid Advertising and How Backers Find Your Project

Way back in October 2012 when the Viticulture Kickstarter campaign ended, I send out a Google survey to backers to collect various information from them, including the question: How did you hear about the Viticulture Kickstarter project? I posted the first week of results on this blog entry, but I now have the full data to share with you. I think other project creators–especially board game creators–when determining the value of paid advertising. 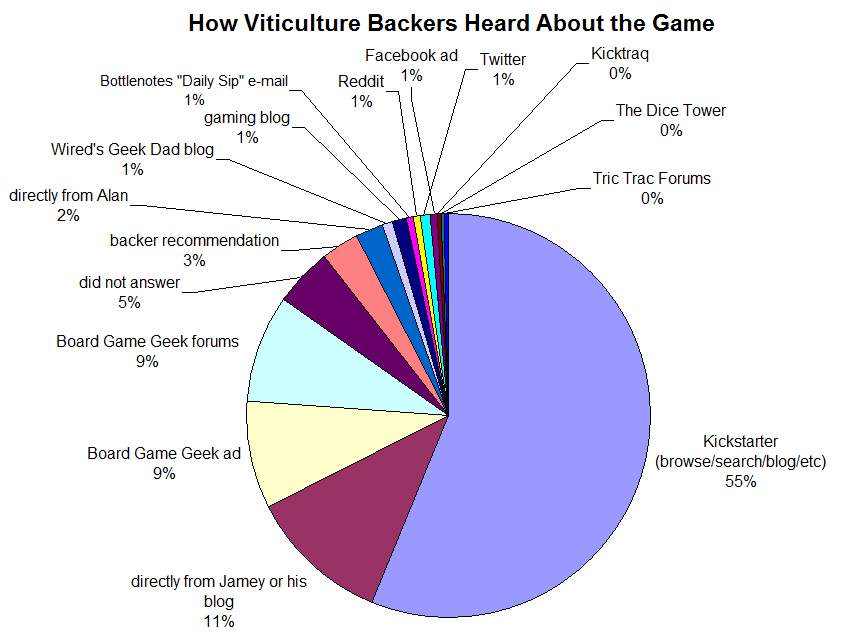 We spent a total of about $1,300 on advertising out of pocket–those weren’t expenses that we were going to use Kickstarter funds for (and unless you explicitly say so on your project page, I recommend the same to you). $1,000 went to Board Game Geek for about a month of banner ads, $150 went to The Dice Tower for a preview of the game, and $150 went towards Facebook ads.

Was the paid advertising worth it? See below for the specific totals: 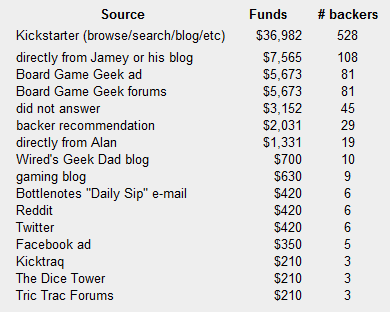 Based on the funds we put into each area of advertising, we made more than we spent. But it was pretty close with Facebook and The Dice Tower, while it wasn’t close at all with Board Game Geek.

I must admit that I don’t think all that highly of banner ads. I rarely even notice them anymore. But as someone who visits Board Game Geek on a daily basis, I often click on Kickstarter board game ads, if not just to see how those campaigns are doing. So I would recommend BGG to tabletop game projects, but if your product is in a different category, make sure you find a site where people actually click on banner ads. A good test of this is to see if you pay attention to and occasionally click banner ads on the website in question.

For Facebook and The Dice Tower, at first glance you might think that it’s too risky. It may not be worth it. But each person who backs your project (regardless of where they come from) is another person who might share it with their friends, so the result could be exponential even though it doesn’t should up in the data. Similarly, having sites like The Dice Tower review your game or having blog interviews may not result in backers immediately clicking over to Kickstarter to back your project, but they might contribute to individuals reaching a tipping point of information about your project.

I’ll use a non-Kickstarter game as an example. There was a board game called Tzolk’n that came out last fall. It caught my eye right away as an innovative worker-placement game. But I didn’t buy it right away. Nor did I buy it after I watched some preview videos and read some reviews. Nor did I buy it a few months later when I read more reviews and saw it make some “best of 2012” lists. But then I read one more positive review in January, and suddenly for some reason I reached my tipping point. There wasn’t anything special about that particular blog entry. I simply had reached a critical mass of information, and I pulled the trigger to buy the game.

I will say this: If video bloggers preview your product (whether they’re paid or unpaid), make sure you have a really nice prototype. I’m a little embarrassed of the Viticulture preview on The Dice Tower video. 2,000 people have watched that video, and it’s never going away, even though the final game looks a million times better than that. Remember that: The internet is forever.

The Lure of Kickstarter

One of the deceptive elements of the above pie chart and data is Kickstarter itself. Looking at this, you might think that you can put a project on Kickstarter, and you’ll be flooded with backers. Please, please do not think that. Kickstarter is not magic. For you to attract backers on Kickstarter, you need to have a great project page (video, copywriting, etc) , a compelling rewards and stretch goals, high engagement with backers, and much more. Remember, 56% of Kickstarter projects fail.

You Are Your Best Advocate

Between the two of us, Alan and I directly raised 13% of our total pledges. That’s about $9,000, or 36% of our original goal of $25,000 (the vast majority of backers we directly solicited–friends, family, blog readers, networks, etc–backed the project before we hit our funding goal). That’s really important. When you’re starting from scratch, you need people who believe in you to help get your project on track so it will look more compelling to strangers. Make sure you read my launch day Kickstarter lesson about outreach to friends and family.

You don’t need paid advertising to have a successful Kickstarter project, but you do need a tremendous amount of outreach before, during, and after your project.

If you want more information about referrers, another fantastic post on this topic that you should check out is Minion Games’ James Mathe’s post on Kickstarter myths. You can also read a guest post by an online advertising expert at Google.

34 Comments on “Kickstarter Lesson #26: Paid Advertising and How Backers Find Your Project”