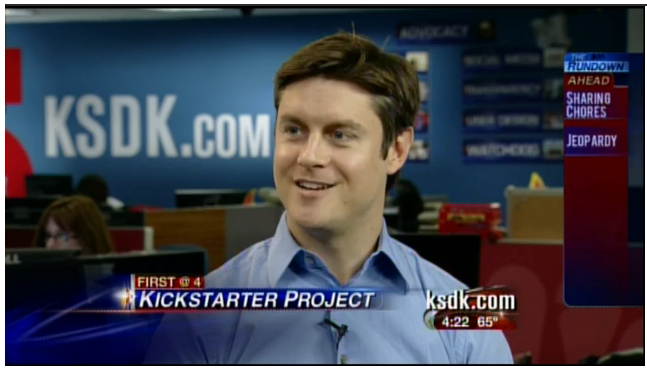 With Viticulture, I waited to pursue hometown press until we had reached around $15,000 in funding. By that point we were already the second-most funded Kickstarter project ever in St. Louis, so I used that as a pitch to the press. It worked out, and I appeared on the local news and in the St. Louis newspaper (check out the photo there–the photographer told me to look at the window and then slowly turn my eyes towards the camera. The effect is downright creepy. Newspaper sales probably dropped that day as a result).

As I was preparing to write this entry, I realized that there is someone else who is far more qualified to write about hometown press, especially after something special happened with his previous Kickstarter project. Thus I have the pleasure of introducing a special guest post from Patrick Nickell, the owner of Crash Games. Patrick just launched a Kickstarter project for his latest board game, Paradise Fallen. I’ll leave the rest to Patrick! 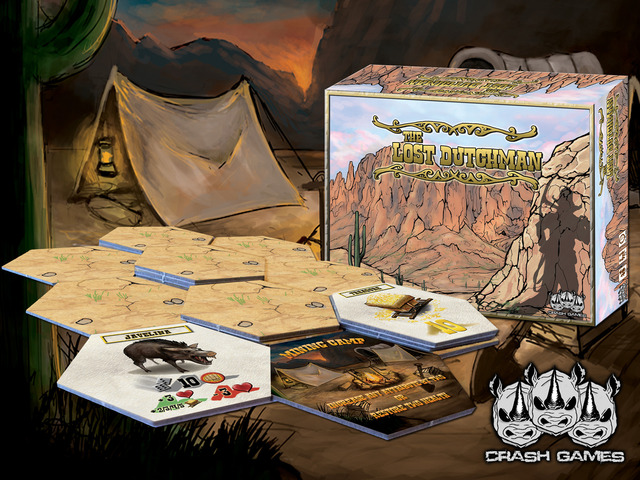 When running a Kickstarter Campaign it is easy to overlook things. It’s pretty much a forgone conclusion that you are going to miss something before you click that green rocket. Thankfully most things you can adjust on the fly. One thing that you can’t afford to miss is something you probably hadn’t even considered, sending out a Press Release.

A well written Press Release can capture the attention of your local media and perhaps even national media. This can lend some serious exposure to your Kickstarter Campaign and really rally your community around your efforts.

When my company, Crash Games, launched our second game on Kickstarter, “The Lost Dutchman” we sent out a press release to a slew of local media (I’ll let you know more about doing this in just a bit) and it took a nice chunk of effort to do this but we knew that it would most likely be worth the effort. The Legend of The Lost Dutchman is a local Phoenix area legend that has existed for over 100 years and there are plenty of reminders of that legend by way of Tourist Shops, Local Museums, a State Park and people still go missing in the mountains to this day looking for the gold mine of The Lost Dutchman, also known as Jacob Waltz. All of this local lore helps tremendously in getting the attention of the media.

Even though I’ve been a published writer and columnist in two newspapers I had no idea how to write a press release. After researching it I put what I thought was a nice press release together and went about the business of getting it to all of the news sources. There are a lot of options to getting a press release out; particularly there are options that can cost quite a bit of money. I chose to go the affordable option and I made a list of all local media I wanted to get in touch with from television to newspapers and even radio stations. I found all of their submission requirements and sent the press release out.

I was very excited when I got a phone call a day later from a news reporter from an FM Radio News Station that wanted to interview us. After this interview I started getting a lot of calls. A lady from a newspaper reporter from a small newspaper in the community of Gold Canyon near the Superstition Mountains wanted to interview us. Another bigger newspaper, The East Valley Tribune, wrote up a small story on us and put us on the cover of their Sunday paper. The E.V. Tribune story was picked up by national media and we had a small blub on MSNBC.

Then the big call came in, the call I had been hoping for. ABC 15 in Phoenix called me and they wanted to shoot a story about Crash Games and The Lost Dutchman! This was awesome news! Thankfully everyone was off work that day and we all ran down to the television studio and they filmed us in one of their conference rooms playing the game and interviewed us. (You can see the story here https://bit.ly/NYjZWU) Being on the 6 O’Clock News was a lot of fun and it was something that I’ll never forget. That’s not to say there wasn’t a downside with the story though. The anchor reading the piece (My favorite in all of Phoenix) slaughtered the most important part, how people could support the project. It was awful, I cringed. It was really frustrating because I had made it a point to really simplify how people could help and it all went to crap. Watch the video above and you’ll see what I mean.

Okay enough about me. I want to help you get your project in front of your local media, which can be tricky but I’m going to give you some tips that’ll help you increase your chances of getting that exposure. Here are the Top 5 things to consider when sending out a press release. 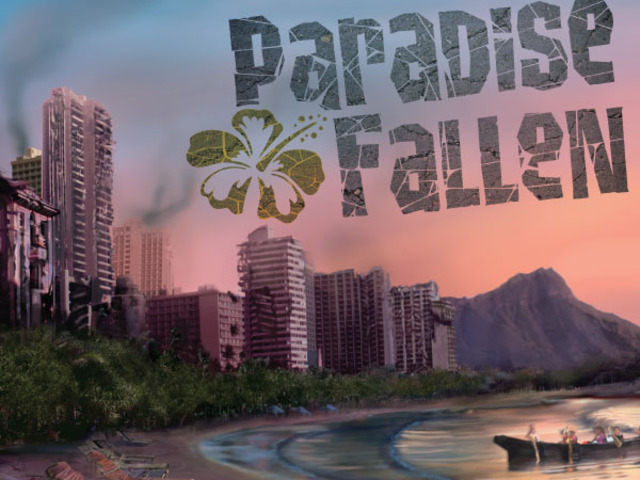 1. Write up a well written, concise and engaging press release.

It can be a bit intimidating to write up a press release. Research others and find your angle. You have to find something that sticks out and captures the media’s attention which isn’t easy. Maybe you have a unique day job, maybe your project ties into something important that is local. Find your most intriguing aspect and write your press release from that angle. The type of news day the media is having will dictate whether or not they’ll pick up your story. You want to hope for a slow news day as this will give you your biggest opportunity to get your story picked up.

2. Send that press release to EVERYONE!

Big and small, find the submission requirements that each media outlet has and make sure to abide by them. I have found that faxing it can actually give you better success. Someone has to pick that fax up and look at it. E-mails are ignored all the time. If your local media outlet gives you several choices send the press release every way you can.

3. Hone your message and be ready when your opportunity comes.

My good friend and ex-business partner Michael Coe always says “Luck is when preparation meets opportunity” and I fully subscribe to this line of thinking. It can be overwhelming to  have seasoned reporters and anchors reach out to you and the last thing you want is to have a muddled message all because you were excited about being in the newspaper or on TV. Keep a couple “bullet points” in your head and for the love of humanity make sure you deliver a simplified way of supporting your project.

4. Don’t forget to advertise this new media exposure once you get it.

Once you’ve had an interview, update your Kickstarter Page and make a section on your page for Media Exposure so people can see your success. This will perhaps be the thing that pushes someone on the fence over to the side of giving you their pledge. Also make sure you send out an update with this information.  It is my opinion that backers love to share in this excitement too.

One of the most painful lessons I learned during The Lost Dutchman and believe me there were a few, was that the interviews and stories didn’t mean an increase in pledges. The unfortunate reality is that the vast majority of the nation still has no idea what Kickstarter is so it is your job to balance your message with a bit of “evangelism” for Kickstarter. Inform them what Kickstarter is and then deliver what it is you’re trying to accomplish through Kickstarter.

Thanks, Patrick, and good luck with Paradise Fallen! If anyone else has experiences to share about hometown press, feel free to comment.

Next: The Matching Pledge